A remarkable book was published in 1981 called The 5000 Year Leap: A Miracle That Changed the World by Cleon Skousen. It had a fair sale, then for many years just gathered dust on bookshelves. This year, the television commentator Glenn Beck recommended reading this book, and it suddenly rose to the top three of Amazon book sales. 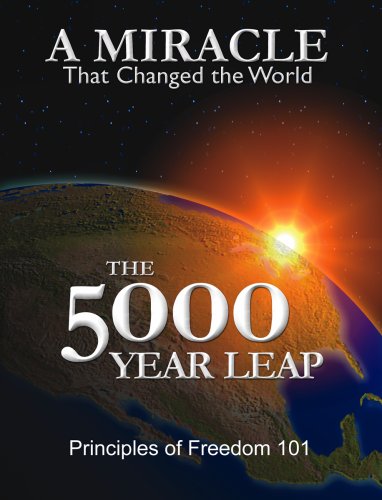 The title explains the author’s belief that the U.S. Constitution was a miracle that brought about more human progress than was made in the previous 5,000 years. Author Skousen explains the 28 principles of freedom that inspired our Constitution, and became the foundation of our great nation. Let me tell you about some of these principles.

A free people cannot survive under self-government unless they remain virtuous and morally strong. The only reliable basis for sound government and just human relations is Natural Law. The most promising method of securing a virtuous people is to elect virtuous leaders. Without religion, the government of a free people cannot be maintained. The proper role of government is to protect equal rights, not to provide equal things. The God­ given right to govern is vested in the sovereign authority of the whole people. Life and liberty are secure only so long as the rights of property are secure.

The highest level of prosperity occurs when there is a free-market economy and a minimum of government regulations. Only limited and carefully defined powers should be delegated to government, all others being retained by the people. Strong local government is the keystone to preserving human freedom.

And so. the United States Constitution turned out to be a dynamic success formula that gave America a 5,000 year leap and enabled our nation to become a land of liberty and prosperity that is the envy of the world.

What You Need to Know is the Border is about to be totally open! In just a few days we are going to see around 18,000 illegal aliens crossing our … END_OF_DOCUMENT_TOKEN_TO_BE_REPLACED