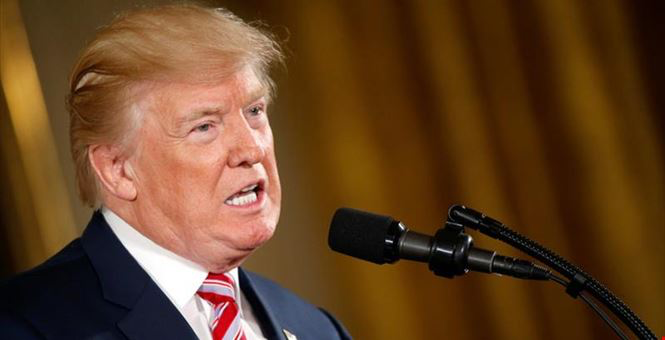 An important reason why Phyllis Schlafly enthusiastically supported Donald Trump for president was because, in her words, “He has fight in him.”  Nearly every day he proves that to be true, most recently with his tweets in support of his travel ban from terrorism-associated countries.

Not since Ronald Reagan have we had a conservative president like Trump who “has fight in him” to stand up for the security and prosperity of ordinary Americans.  So many other politicians cave into whatever the media want.

After the press criticized Trump all day Monday, June 5th, for some early-morning tweets by Trump in support of his travel ban, by evening Trump demonstrated that he was undeterred by comments from the peanut gallery.  He came out swinging with another tweet after hours:  “That’s right, we need a TRAVEL BAN for certain DANGEROUS countries, not some politically correct term that won’t help us protect our people!”

Oh, how refreshing it is to have a president who does not kowtow to the liberal media and the D.C. establishment who think they run our country.  Trump is fighting to win on his travel ban, and on many other issues near and dear to the hearts of average Americans.

The story line from the media is that President Trump’s most recent tweets will hurt his court case, which has reached the U.S. Supreme Court with an expedited briefing schedule.  Even his supporters think Trump’s out-of-court statements via Twitter will be considered by the Supreme Court Justices.

But Sarah Huckabee Sanders, the Deputy White House Press Secretary who is also the daughter of the twice-presidential conservative candidate Mike Huckabee, was splendid in fielding hostile questions from the press about President Trump’s repeated use of Twitter.  She observed that Trump “has over 100-plus million contacts through social media, on all those platforms” including Twitter.

“I think it’s a very important tool for him to be able to utilize,” she added.  When asked if Trump’s tweets are vetted by an attorney, she candidly and unapologetically replied, “Not that I’m aware of.”

The president of the United States should not need to have his comments vetted by an attorney before speaking directly with the American people.  Alexander Hamilton promised that the judiciary would be the “weakest” of our three branches of government, and the President has as much authority as all nine Supreme Court Justices combined.

That is what our Constitution provides, and that is what our Founders intended.  The idea that President Trump shouldn’t speak directly to the American people without having his remarks vetted by an attorney shows how far the political power structure has strayed from its constitutional moorings.

Less than a year ago, Justice Ruth Bader Ginsburg made a series of off-the-cuff remarks critical of Trump, calling him a “faker” and even musing that she might “move to New Zealand” if he were elected.  No one suggested then that Ginsburg’s comments should have been vetted by the Chief Justice before she spoke.

The same people who gave Ginsburg a pass for her intemperate remarks about Trump when he was a candidate are now saying that as President of the United States, Trump should be more careful how he says things, lest the supposedly supreme power of the judiciary punish him for it.

Contrary to the media, Trump should be free to share his views on litigation strategy with the American people whom he represents as our duly elected president.  There’s no confidentiality protecting such communications, but courts are not supposed to be in the business of ruling against a newly elected president as he works overtime to protect national security and fulfill the campaign pledge upon which he was elected.

As statements out-of-court, Trump’s tweets to the American people would not be admissible on appeal under traditional rules of evidence.  The Supreme Court does not ordinarily hear testimony, and it should not allow the proceeding to be distorted by the introduction of numerous out-of-court statements through legal papers.

Opponents of the travel ban have bragged about using Trump’s statements against him in court.  Trump should call their bluff, and offer to testify before the Supreme Court to explain fully how necessary his travel ban is to protect the American people against a replay of what is happening in London.

The Supreme Court, of course, would decline Trump’s offer.  It should also decline to base its decision on snippets quoted without telling the full story.

“At least 7 dead and 48 wounded in terror attack and Mayor of London says there is ‘no reason to be alarmed!’” Trump said of the recent massacre in London.  Don’t expect the adversaries of Trump to emphasize that quotation in court.

What You Need to Know is thank Trump for the end of Roe v. Wade. As great as the March for Life was last week and excited as my family was to … END_OF_DOCUMENT_TOKEN_TO_BE_REPLACED

What You Need to Know is Joe Biden’s ego will be his undoing. He should drop executive privilege and get this classified documents investigation over … END_OF_DOCUMENT_TOKEN_TO_BE_REPLACED

Phyllis Schlafly Eagles · February 3 | "Woman" Is the Word of the Year The internet is a powerful tool that most of us use every day. … END_OF_DOCUMENT_TOKEN_TO_BE_REPLACED

Phyllis Schlafly Eagles · #WYNK: Pro-Life Movement Has to Adjust | January 19, 2023 #ProAmericaReport The following is a transcript from the Pro … END_OF_DOCUMENT_TOKEN_TO_BE_REPLACED

Phyllis Schlafly Eagles · #WYNK: Political Hit Jobs Against Lawyers | January 18, 2022 #ProAmericaReport The following is a transcript from the Pro … END_OF_DOCUMENT_TOKEN_TO_BE_REPLACED

Proving once again that he is in touch with ordinary Americans, Donald Trump selected education for the first video message of his 2024 presidential … END_OF_DOCUMENT_TOKEN_TO_BE_REPLACED

Phyllis Schlafly Eagles · #WYNK: Trump's Record is Baked In | January 30, 2023 #ProAmericaReport The following is a transcript from the Pro … END_OF_DOCUMENT_TOKEN_TO_BE_REPLACED

What You Need to Know is Trump’s record is baked in. He’s already been torn apart every which way and his record stands with all the things you like … END_OF_DOCUMENT_TOKEN_TO_BE_REPLACED

What You Need to Know is Tucker is allowing the will of the people to be heard! When a huge block of Republicans and so-called conservatives are … END_OF_DOCUMENT_TOKEN_TO_BE_REPLACED