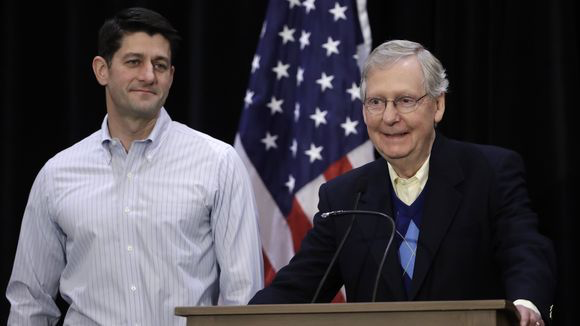 By agreeing to a surprise, temporary budget deal with “Chuck and Nancy,” the Democratic minority leaders of the Senate and House, President Trump served notice that he is losing patience with leaders of the do-nothing Republican Congress. With time running out in this fiscal year, which means the window for “budget reconciliation” is about to close, Congressional Republicans have failed to deliver on their promises to repeal Obamacare, defund Planned Parenthood, and enact fundamental reforms to federal taxes and entitlement spending.

The temporary budget deal produced a spike in the president’s public approval, which is below 40 percent in most polls. But Trump still beats Hillary Clinton, whose approval rating has sunk to 30 percent, and public approval of Congress has fallen to a new low of 10 percent.

The Republican Congress includes many members of both Houses who never supported Trump, and some bragged they didn’t even vote for him. They don’t understand Trump’s appeal and never believed he could carry Iowa, Wisconsin, Michigan and Pennsylvania — states that no Republican presidential candidate has won in nearly 30 years.

Exhibit A is Representative Charlie Dent, a liberal Republican who represents a Pennsylvania district that Trump won by a wide margin. After a rally in Allentown by hundreds of angry constituents demanding that he support the president, Dent announced he will not seek another term in Congress.

A similar battle is shaping up in Arizona where anti-Trump Senator Jeff Flake, whose job approval rating is an abysmal 18 percent, faces a strong challenge in the primary. An Alabama special GOP primary election for U.S. Senate, where most Trump supporters have coalesced behind Roy Moore instead of the candidate favored by Mitch McConnell, will be held on September 26.

The battle is illustrated by two veteran Missouri Republicans, both now 81 years old and retired. One is John Danforth, the Ralston Purina heir who became an ordained Episcopal minister before serving as state attorney general and U.S. Senator.

Senator Danforth has such a reputation for sanctimony that he’s often referred to as Saint Jack. He issued a scathing attack on the President, which the liberal Washington Post and St. Louis Post-Dispatch were only too happy to publish.

Danforth claimed that “Trump isn’t a Republican” because “he stands in opposition to the founding principle of our party: that of a united country” as reflected in our national motto, e pluribus unum (out of many, one). Danforth concluded that “for the sake of our nation, we Republicans must dissociate ourselves from Trump by clearly and strongly insisting that he does not represent what it means to be a Republican.”

The other Republican, Gene McNary, was the longtime prosecuting attorney and county executive in Missouri’s richest and most populous county, Saint Louis. McNary released a cogent response to Danforth, but the liberal media weren’t interested in publishing it.

As McNary correctly noted, “It isn’t the President who is dividing this great Nation, it is the liberal left, the media, and obstructionist Democrats. They can’t get over the fact that the American people elected Donald Trump.”

While Danforth complained that “Trump is eager to tell people they don’t belong here, whether it’s Mexicans, Muslims, the transgendered or another group,” McNary responded: “Is it wrong to tell Mexicans and others to come into the U.S. legally? Is it right for sanctuary cities to flout the law and harbor those who are in the U.S. unlawfully?”

As the former commissioner of the Immigration and Naturalization Service (INS) before those functions were transferred to the new Department of Homeland Security, McNary patiently explained why Danforth was “patently wrong” to say that Trump’s travel ban is anti-Muslim. People who can produce reliable documents from countries with stable governments are not prevented from coming into the U.S. merely because they are Muslim.

Danforth also took the opportunity to blast the so-called Christian right for being “unfriendly to gay Americans,” to which McNary replied: “I haven’t heard a negative word from the President with regard to individuals who identify as transgender. As one who served in the Army, I can see the rationale for keeping these individuals out of the barracks.”

Many Americans have been stunned by the speed at which the transgender issue has reached the point where even our armed forces may be forced to accommodate a tiny sliver of troubled individuals. At the Westmoreland County, Pennsylvania, county fair last month, a 71-year-old lifelong Democrat who voted for Trump changed his voter registration, saying, “There are two parties: one party of Americans, and another party trying to put men in women’s bathrooms and perform sex changes on people at my expense!”

Gene McNary concluded his response to Senator Danforth by observing, “Trump broadened the base by appealing to industrial and trade workers who felt that the Democratic Party had deserted them. I like that. I like Trump. He is my kind of Republican.”

What You Need to Know is how the Narrative Machine skewed the 2020 election. From Elon’s documents dumps, we now have concrete information that the … END_OF_DOCUMENT_TOKEN_TO_BE_REPLACED

What You Need to Know is how lame the Lame Duck session is. For all of November and December, there are several dangerous public officer holders who … END_OF_DOCUMENT_TOKEN_TO_BE_REPLACED

What You Need to Know is about the ethics of power, not the ethics of truth. That's the political situation we are facing! The left pursues power no … END_OF_DOCUMENT_TOKEN_TO_BE_REPLACED

What You Need to Know is Democrats’ plan to slow down GOP investigations. David Brock (of Media Matters) released a memo detailing a group that will … END_OF_DOCUMENT_TOKEN_TO_BE_REPLACED

What You Need to Know is why Trump is not an echo of other candidates before him. Phyllis Schlafly famously first used that phrase — a choice, … END_OF_DOCUMENT_TOKEN_TO_BE_REPLACED

What You Need to Know is why Trump is not an echo of other candidates before him. Phyllis Schlafly famously first used that phrase — a choice, not an … END_OF_DOCUMENT_TOKEN_TO_BE_REPLACED

Phyllis Schlafly Eagles · December 9 | Are Supporters of America First Scrooges? It’s going to be a long, cold winter in the United States, but … END_OF_DOCUMENT_TOKEN_TO_BE_REPLACED

Phyllis Schlafly Eagles · December 8 | Is It Criminal to Question Elections? Prosecutors in Fulton County, Georgia have made it their mission to … END_OF_DOCUMENT_TOKEN_TO_BE_REPLACED