With his second conservative nomination to the Supreme Court in July, President Trump exceeded even Ronald Reagan’s being forced into moderate choices. Although a victory in placing Scalia on the High Court, Reagan was backed into a corner multiple times by the establishment and forced to pick liberal moderates. 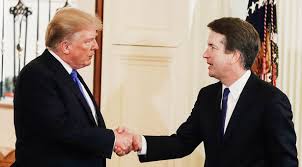 Judge Brett Kavanaugh is great on immigration and sovereignty, the life issue, and the Second Amendment. Trump may have made this look easy, but liberals did everything they could to dissuade him from selecting Brett Kavanaugh to fill the vacancy left by Justice Kennedy on the Supreme Court. A coordinated, sophisticated campaign to criticize Kavanaugh from the right was both insincere and deceptive.

On the life issue, liberals are of course sharpening their knives to try to block Kavanaugh from confirmation by insisting that he might overturn Roe v. Wade. But that is a very tough sell by the Left, as young people are increasingly pro-life and nearly a half-dozen Democratic Senators are running for reelection in pro-life states that Trump carried by a landslide.

The issue of Roe v. Wade has never sunk a nominee in the Senate, despite all the hoopla by pro-abortion feminists pretending that they can block a nominee on that issue. They failed in trying to block Justice Clarence Thomas on that issue, and were unable to block the confirmation of John Roberts or Samuel Alito, either.

We hope that Kavanaugh does not grovel to pro-abortion senators as they demand reassurances that the fallacy of Roe v. Wade be enshrined forever even though it has absolutely no basis in the Constitution. Kavanaugh need not answer questions about the issue, just as Justice Ruth Bader Ginsburg set the precedent herself for declining to answer specific questions about cases.

Justice Anthony Kennedy turned to the right in his final year on the bench, both in his decisions and in allowing Trump to fill his vacancy. It is unlikely that Justice Kennedy would find anything to criticize in this nomination of Kavanaugh for the seat that Kennedy is leaving, and neither should any Republican or moderate Democrat.

Mike Davis is the former Chief Counsel for Nominations to the Senate Judiciary Committee under Sen. Chuck Grassley. In his current role as founder and … END_OF_DOCUMENT_TOKEN_TO_BE_REPLACED

Phyllis Schlafly Eagles · May 9 | How To Remake A Political Party Remaking a political party is difficult, but essential now as the entrenchment of … END_OF_DOCUMENT_TOKEN_TO_BE_REPLACED

“He was definitely into video games - shooter games,” a classmate observed about the Buffalo grocery-store mass murderer. A British tabloid reported … END_OF_DOCUMENT_TOKEN_TO_BE_REPLACED