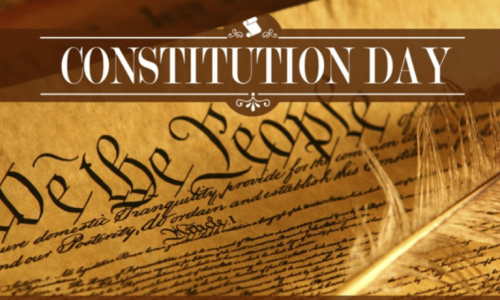 We are fast approaching the week to honor our U.S. Constitution, the supreme law of our land. It was signed in Philadelphia by the delegates to the Constitutional Congress on September 17, 1787, 232 years ago, to be effective when ratified by nine States, and actually effective in June in 1788 when ratified by the State of New Hampshire. George Washington was inaugurated as the first president under the Constitution on April 30, 1789.

Thirty-nine men of all ages with diverse political thinking and from many walks of life each took a quill in hand and solemnly affixed his signature.  George Washington, chairman of the Constitutional Convention, was first to sign.  The last was Abraham Baldwin, a kindly lawyer from Georgia, who thought God had willed that we make this instrument for the people.

The Constitution is the supreme law of our land, taking precedence over every law, both State and National, but over-ridden by treaties with foreign countries. We must work very hard to preserve the rights and freedoms which are guaranteed to us by our Constitution. We are fortunate that the amendment process, which is contained within the Constitution, requires thorough consideration and allows time for thoughtful debate before changes can be made.  The result is that usually changes have been made with great care and strong consensus as to the reasons.

Throughout history Americans have been possessed of an acute sense of divine election.  They have fancied themselves a people chosen for the awesome responsibility of serving as a light to the nations, a shining city on the hill for the rest of the world.

It is therefore fitting that the delegates who wrote our Constitution, when spending a long, hot summer in Philadelphia from May to September 1787, thought of themselves as freemen with all major decisions and appointments by majority consent.  Moreover, the delegates in Philadelphia believed that religious precepts had to be the heart and soul of the framework of the Constitution they were writing.  Sir William Blackstone, a contemporary and the principal authority on English Common Law in the last half of the 18th Century, thought that any man-made law which violates a law of God was “no law at all”. This religious undergirding of the American system of government was a fundamental premise of the Founding Fathers.

Other thinkers of the day whose ideas are basic to our Constitution were Adam Smith, whose The Wealth of Nations, published in 1776, stands as the first modern economic analysis. It describes what we now call free markets and argues they lead to economic prosperity.

But perhaps the single most important influence that shaped the founding of the United States comes from John Locke, a 17th century Englishman who redefined the nature of government, believing that the center of power should be in the legislature.  In Locke’s Second Treatise of Government, he identified the basis of a legitimate government. According to Locke, a ruler gains authority through the consent of the governed. The duty of that government is to protect the natural rights of the people, which Locke believed to include life, liberty, and property. If the government should fail to protect these rights, its citizens would have the right to overthrow that government.

The Founders knew that unless they structured such a government as these men believed necessary, it would never be possible to protect and implement other principles which they knew were required to bring them prosperity and happiness within a framework of liberty.

Samuel Adams, “the father of the Revolution” indicated practical concern that all human beings might not follow God’s law”:

“In this state of society, the inalienable rights of nature are held sacred, and each member is entitled to an equal share of all the social rights. No man can of right become possessed of a greater share.  If anyone usurps it, he so far becomes a tyrant, and when he can obtain sufficient strength the people will feel the rod of the tyrant.”

Among the many principles which are the foundation of the Constitution, following are three important ones, in addition to the ones involving liberty, freedom, and equality already mentioned.

“A nation of well-informed people who have been taught to know and prize the rights which God has given them cannot be enslaved.   It is in the region of ignorance that tyranny begins.”

“Posterity! You will never know how much it cost the present Generation to preserve your Freedom! I hope you will make good use of it. If you do not, I shall repent in Heaven, that I ever took half the Pains to preserve it.”

We must all dedicate ourselves to protecting and preserving the great heritage created for us and handed down to us and our children by the Founding Fathers, from those who dislike our nation and the rules under which it is governed.

What You Need to Know is Montpelier is going Woke. Soledad O’Brien is now on the board of directors of Montpelier, James Madison’s home. She is part … END_OF_DOCUMENT_TOKEN_TO_BE_REPLACED

What You Need to Know is Pelosi is Wrong or Lying. The archbishop came out saying that Speaker Nancy Pelosi will be denied Holy Communion because of … END_OF_DOCUMENT_TOKEN_TO_BE_REPLACED

Phyllis Schlafly Eagles · May 16 | The Trickle-Down Effect of Bad Policies Good news arrived in the district court of the District of Columbia, … END_OF_DOCUMENT_TOKEN_TO_BE_REPLACED