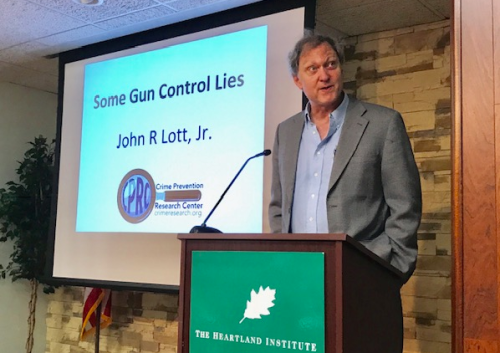 John Lott is known as the nation’s preeminent expert on guns. Andrew Napolitano, senior judicial analyst at the Fox News Channel, in praise for Lott’s latest book, The War of Guns (Arming yourself Against Gun Control Lies) described Lott as the “most dogged, intellectually credible, academic defender of the right to keep and bear arms in the United States today.”

At Heartland Institute last week, Lott used his latest book (an essential book to read for defending your Second Amendment rights before they are taken away forever) as a sounding board for his remarks debunking the so-called “facts,” “data,” “arguments” of anti-gun advocates. His purpose is to expose how the gun control movement has repeatedly twisted or ignored the real evidence, evidence that refutes them on every point.  Listen here to Lott’s Heartland presentation. 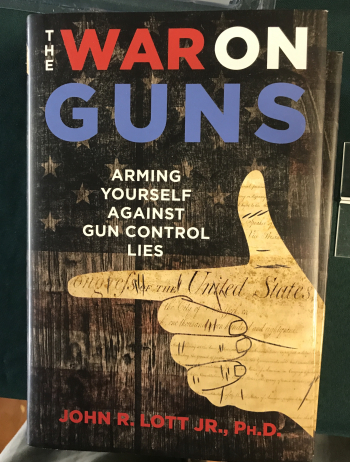 The following gun control lies, all debunked, were discussed by Lott:

How does the U.S. compare to other countries?

According to President Obama, as cited in an interview that aired on CBS Evening News, Dec. 2, 2015: “The one thing we do know is that we have a pattern now of mass shootings in this country that has no parallel anywhere else in the world.”

“Not so,” said Lott.  Compared to Africa, Australia, Europe and Israel, the U.S. has a relatively low per capita death rate from large mass public shooting, defined as 4 of more deaths in a public place. Among other countries whose borders are primarily in Europe, the rate is 65% higher than that of the U.S. The U.S. makes up about 4.4 percent of the world population (322.8 million/7.411 billion) and accounts for 4.2 percent of the deaths from these attacks.  It’s simply a matter of adjusting for America’s much larger population.

Lott then proceeded to debunk Criminologist Adam Lankford’s study covering the years of 1966 to 2012 claiming this nation had 31% of all mass public shooters in the world over 47 years, despite having less than 5% of the global population (World Factbook, 2014). Although Lankford’s study received coverage in hundreds of news stories, with international news coverage in at least 35 different countries, Lankford refused to provide his list of cases, refusing to answer questions about how he got his “complete” list of cases from around the world.

Do countries with more guns having higher homicide rates?

All studies making international comparisons of gun ownership rates make use of something called the 2007 Small Arm Survey, a group that receives funding from and often works closely with George Soros’s Open Society Institute.  The UN provides homicide data for 192 countries, but the Small Arms Survey only lists gun ownership and homicide data for 116.  The missing countries all have higher homicide rates than the U.S.  The Small Arms survey makes it look as though there are only twenty-five countries with higher homicide rates than the U.S., but there are really 101 countries.

As to how homicide rates compare across all 192 countries, the 2008 UN provided data showed that the U.S. rate was slightly less than 5.4 homicides per 100,000 people.  The worldwide rate was 10.5 (about twice the U.S. rate), and the median was six per 100,000.  Even so, you can’t always trust the numbers provided by the countries themselves as politicians and dictators like to give the impression that they are doing a better job than they really are, as in Chicago where what looks like murders are reclassified as “noncriminal death investigation.”

About gun bans?
Every place that has banned guns (either all guns or all handguns before and after) has seen murder rates go up.  It’s impossible to point to one place where murder rates have fallen, whether Chicago or D.C. or nations such as England, Jamaica, and Ireland, or obscure places like the Solomon Islands. Reference was made to Australia’s gun buyback of 1996-97.  Evidence shows no benefit from the law, as the buyback only took guns away from law-abiding citizens.  The reason higher crime rates didn’t happen is that self-defense use in Australia was already illegal and resulted in extreme penalties if detected.  U.S. data, however is clear.  Laws that restrict gun ownership adversely affect people’s safety.

As to regulating guns?

If government regulations were actually so effective, motor vehicle safety should have improved relative to firearms regulation.  Neither point has turned out to be true.  As to guns, there is no evidence that safety regulations reduced total suicides, as there are too many ways for people to kill themselves.

The Crime Prevention Research Center, ( CPRC) founded by John Lott, is a research and education organization dedicated to conducting academic quality research on the relationship between laws regulating the ownership or use of guns, crime, and public safety; educating the public on the results of such research; and supporting other organizations, projects, and initiatives that are organized and operated for similar purposes. It has 501(C)(3) status and does not accept donations from gun or ammunition makers or organizations such as the NRA or any other organizations involved in the gun control debate on either side of the issue. Nor does sit accept donations from organizations involved in the debate over illegal immigration.   To subscribe to the Research Center, click here.

The Heartland Institute’s Lennie Jarratt, project manager for the Center for Transforming Education at The Heartland Institute, opened the event by presenting startling statistics on school safety. Watch here the youtube of Lennie Jarratt addressing the issue. Regarding Illinois’s ranking for bullying in 2018, Illinois ranked #19 in bullying prevalence, #15 in bullying impact and treatment, and #4 in highest cost of truancy due to bullying.  In a survey taken this past July, 34% of adults didn’t think school safety was an important issue; however, among low income parents 48% agreed it was.

As Jarratt remarked, in the aftermath of the Parkland shooting, Heartland and the Heritage Foundation partnered to consider school safety.  The Heritage Foundation published a report by Lindsey Burke and Jennifer Marshall titled the ‘Safe Student’ Scholarship — Expanding Education Choice Options to Improve School Safety. Heartland’s contribution was its report by Vicki Alger and Timothy Benson titled, Protecting Students with Child Safety Accounts. 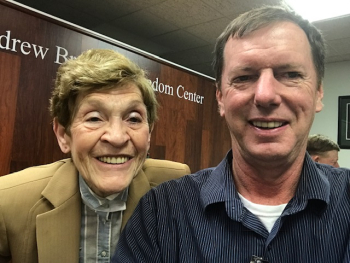 “He was definitely into video games - shooter games,” a classmate observed about the Buffalo grocery-store mass murderer. A British tabloid reported … END_OF_DOCUMENT_TOKEN_TO_BE_REPLACED

What You Need to Know is Rand is right again! He’s leading fearlessly against the swamp in Washington. Rand's latest stand undercuts the GOP's Ukraine … END_OF_DOCUMENT_TOKEN_TO_BE_REPLACED

Phyllis Schlafly Eagles · May 19 | Boys and Girls and Grades? ** Previously recorded by Phyllis Schlafly // May 2015 ** Colleges claim they … END_OF_DOCUMENT_TOKEN_TO_BE_REPLACED