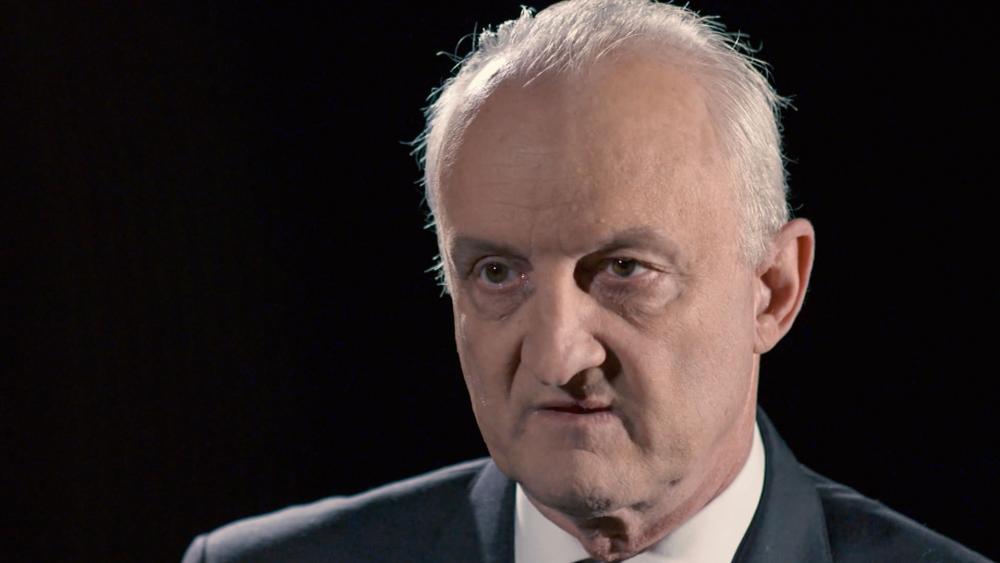 An eye-opening presentation was given by Philip Haney at Phyllis Schlafly’s Gateway Eagle Council XLVII, which was held September 14-16, 2018 at the Marriott St.  Louis Airport, Saint Louis, MO.  Haney’s topic, entitled Sovereignty & The Constitution vs. The Threats We Face, focused on the threats posed both by the radical Islamic Movement, as well as threats from the Left that we currently are at war with.

Philip Haney specialized in Islamic theology and the strategy and tactics of the global Islamic movement before retiring from government in 2015  Philip is the author of the book See Something, Say Nothing (A Homeland Security Officer Exposes the Government’s Submission to Jihad).

As Philip Haney stated: “It is impossible to effectively respond to threats that are abstract; however, if life is valued we would protect our borders and prohibit sanctuary cities  It is a travesty that many Americans don’t recognize the threats we do face as a nation, or that we are involved in a battle  People often ask “Just how far will it go?”

Haney referenced a verse from Isaiah 28.5-6 to explain what must be done: “In that day the Lord of Hosts will be a crown of beauty unto the remnant of his people  And a spirit judgment to them that sit in judgment, and strength to them who turn the battle to the gate.”

According to Phil Haney (as quoted from Abraham Lincoln), “The dogmas of the quiet past are inadequate to the stormy present.  The occasion is piled high with difficulty, and we must rise — within the occasion.  We must think anew and act anew. We must disenthrall ourselves, and then we shall save our county…the last best hope on earth.”

What are we fighting?

As to what we are fighting? We are fighting for our sovereignty.  It involves an underground (artesian) river of those seeking to destroy this nation in tandem with the main stream media.  As a noun, sovereignty means Supreme Power or Authority, the Authority of a State to Govern Itself or Another State, a Self-Governing State.

Within the context of Sovereignty, Mr. Haney has observed that no unified strategy exists within our National Alliance to fight the threats we face, and that many Americans remain indifferent to or unaware that a battle even exists.  He added that the path ahead will require strength and courage from those willing to push back against an adversary who is willing to do whatever it takes to win back power and control (i.e., the Supreme Court Hearings).

According to Haney, Sovereignty in the minds of those attempting to enact what resembles a coup d’état does not include the confirmation of Judge Kavanaugh. Haney also believes President Trump is allowing “the fruit to ripen” (the process to unfold) in the Mueller Special Council probe, to allow the American people time to witness the real intentions of those entities intent on undermining the presidency and the sovereignty of this nation.

The threats we face include the Global Islamic Movement (GIM), Antifa, Progressives, Leftists, and the Socialist movement which Mr. Haney characterized as the APPLES.

By the way, the Socialist Dream is a promising dream that always ends in misery, 100% of the time  Even though anyone who has tried Socialism has gotten hurt, this form of government is still deemed favorable, especially by the younger generation, the excuse being that everyone else did it the wrong way  Fifty years of educational dumbing down and academic indoctrination has made severe inroads into out flanking an educational system that once celebrated the prosperity that the free enterprise system has created over the past 242 years.

As he discussed the Global Islamic Movement, Haney showed that he had first-hand knowledge of the Muslim Brotherhood, and of a large global Islamic group known as Tablighi Jamaat, while he was employed by the Department of Homeland Security (DHS), Customs & Border Protection (CBP) under the Obama administration.

During his tenure with CBP, Haney got into trouble when his intelligence revealed information that the Obama administration wished to keep under cover.  Haney spoke of being investigated nine times over ten years, with efforts made to indict him on criminal charges and put him in jail.  Haney further revealed that the same people who went after him behind the walls of DHS and the State Department are the same people who are currently going after Trump.  In other words, the Obama administration — as it did with other questionable events which reeked of unethical and unlawful behavior — kept Haney’s investigative work from reaching the public and likewise managed to get away with it.

Domestically, the Muslim Brotherhood, and its various front groups such as the Council on American Islamic Relations (CAIR) and the Islamic Society of North America (ISNA), continue to threaten this nation and our sovereignty.

Regarding what Haney described as the Law Enforcement Arena, Haney stated that since it was the first to be corrupted, it will also be the last to be reformed, which, fortunately, is happening under the Trump Administration.

Mr. Haney also spoke of how our nation’s sovereignty remains under threat through opposition to border protection and through illegal designation of sanctuary cities.  Haney  pointed out that Democrats calling for the shutting down of ICE include Kristen Gillibrand and Elizabeth Warren, who are both potential Democrat presidential candidates in 2020.

As mentioned just above, pertinent now to our nation’s sovereignty is the current battle over Kavanaugh’s nomination to the Supreme Court is being raked over the coals specifically because of the abortion issue, which remains the paramount goal of Democrats, to preserve the 1973 Roe vs. Wade Supreme Court decision, at ALL COSTS(!!).  To Democrats, Kavanaugh’s confirmation represents a shift in the balance of power on the Supreme Court, (that is, away from Roe vs. Wade), which they are determined not to prevent, no matter what the cost may be.

Apparently, laws and the Constitution are of no concern to Democrats, if those laws stand in the way of advancing their own agenda.  For example, if the nomination of Brett Kavanaugh is defeated what will happen to Due Process?  Kavanaugh’s defeat would establish an incredibly and destructive and unfair precedent, where evidence and due process are no longer necessary.

Basic tenets of our Constitution

In closing, Phil Haney explained basic tenets of our Constitution which direct what the government is required to do.

The Legislative Branch – Powers of Congress

To establish a uniform Rule of Naturalization…throughout the United State; to provide for calling forth the Militia to execute the Laws of the Union, suppress Insurrections & repel Invasions.

The United States shall guarantee to every State in this of this Union a Republican Form of government and shall protect each of them against Invasion; and… against domestic Violence.

No State shall make or enforce any law which shall abridge the privileges of citizens of the U.S.; nor deny to any person within its jurisdiction the equal protection of the laws.

The second to last slide in Haney’s power point presentation showed the cartoon character Popeye in a boxing position with this caption: “That’s all I can Stands, I can’t Stands No More.”

Following this slide was one that displayed a can of Allen’s POPEYE brand Chopped Spinach.  Those of us old enough to remember the Popeye cartoon character know that eating spinach made Popeye strong and kept him strong.

We as Americans must also remain strong and must fight back against our enemies, lest this great experiment perceived by our forefathers is destroyed by those who wish to annihilate this nation’s sovereignty and its Constitution.

Philip Haney studied Arabic culture and language while working as a scientist in the Middle East before becoming a founding member of the Department of Homeland Security in 2002 as a Customs & Border Protection agriculture office  After advancing to an armed CBP officer where he served several tours of duty at the National Targeting Center near Washington, D.C., he was quickly promoted to its advanced Targeting Team, an unprecedented accomplishment for an agent on temporary duty assignment  Officer Haney won numerous awards and commendations from his superiors for meticulously compiling information and producing actionable reports that led to the identification of hundreds of terrorists  He specialized in Islamic theology and the strategy and tactics of the global Islamic movement before retiring in 2015  Philip is the author of the book See Something, Say Nothing (A Homeland Security Officer Exposes the Government’s Submission to Jihad).

As stated by Phyllis Schlafly: “The crying need of our times is for noble leaders — for men and women who have the courage to stand fast…and who are willing to pay the price that leadership demands in terms of self-discipline and difficult decisions.”  Phil Haney exhibits the leadership demanded in this time of great peril, when elements in our society are scheming to destroy Trump and his administration, our Constitution, and the Rule of Law

Thorner had the occasion to hear Phil Haney speak on two other occasions: the first time when he spoke at the Des Plaines, IL chapter of Act for Americaand the second time at a gathering of conservatives in Rockford, IL, with photos provided by Mark Weyermeyer.

What You Need to Know Feminists don’t what they are doing! They are about to make another marketing error by utilizing all the wrong imagery and … END_OF_DOCUMENT_TOKEN_TO_BE_REPLACED

Phyllis Schlafly Eagles · #WYNK: Systems Aren't Working in America | April 29, 2022 #ProAmericaReport The following is a transcript from the … END_OF_DOCUMENT_TOKEN_TO_BE_REPLACED

What You Need to Know is that systems aren’t working in America. From homelessness, to immigration, to inflation — we have a set of problems that … END_OF_DOCUMENT_TOKEN_TO_BE_REPLACED

“He was definitely into video games - shooter games,” a classmate observed about the Buffalo grocery-store mass murderer. A British tabloid reported … END_OF_DOCUMENT_TOKEN_TO_BE_REPLACED