America has long been a haven of innovation in the free market.  American inventors through the years have looked to Article I Section 8 of our U.S. Constitution and its protection of their “exclusive Right to their respective Writings and Discoveries.”  As a result, America has held the distinction of being a global leader in cutting-edge invention. Phyllis Schlafly recognized this vital part of our free enterprise system in the July 1997 Phyllis Schlafly Report and was a strong voice on behalf of American inventors. Phyllis understood that the superiority of American ingenuity is not a matter of happenstance, but the product of a bold and inspired precedent set by our Founding Fathers and enshrined in our Constitution. Amidst the scandals and contentious issues of the day, we should take the time to remind ourselves of the faithful economic engine enabling the American system to thrive.

The Phyllis Schlafly Report was quick to praise “the American patent system, unique when the Founding Fathers put it into the U.S. Constitution even before freedom of speech and religion, and still unique today.” The uniqueness of the American patent system is a fundamental reason why we should not allow this issue to fall through the cracks. Prior to the ratification of the Constitution, there were no guarantees that an inventor would get the profit or even the credit for his inventions. With that incentive removed, there was very little reason for anyone to invent anything in the first place. For that reason, the Founding Fathers came up with the revolutionary idea of safeguarding the rights of inventors in the same document that safeguards the rights of free speech and free exercise of religion.

One might think that putting the freedom to invent on the same plane as the freedom of speech and religious expression is unnecessary, but the Founders and Phyllis knew otherwise. We hear phrases like “American ingenuity” and “American exceptionalism” all the time, but most people forget where those come from. America is not exceptional because of any inherent trait. Plenty of other countries have smart people. Plenty of other countries have rich natural resources. America was the first country to put the incentive of prosperity with the freedom to invent. Only through patent protection, the private property right, and the free market can America motivate inventors to stretch the boundaries of what is possible and create the products that increase productivity, save time, and save lives every day.

The entire world has benefited from the American patent system. Before America, farmers planted and harvested in the same way that their predecessors did thousands of years ago. Because of the American freedom to invent, John Deere’s steel plow and Cyrus McCormick’s mechanical reaper exponentially increased the productivity of each farmer and each acre of land. The American freedom to invent took communications from horse-borne letters to instantaneous messaging with Marconi’s wireless telegraph. Household chores went from cooking over an open fire to Jordan Mott’s coal stove. The July 1997 Phyllis Schlafly Report pointed out that everyone benefits from the freedom to invent, not just the inventor. The identity politics of the Left have no hold on the patent system. Who could argue that everyone from the richest billionaire to the poorest vagrant has not benefited from such inventions as the zipper and the safety pin? Invention does not discriminate on the lines of sex, race, ethnicity, class, or any other social divide.

Of course, recognizing that the freedom to invent is a pillar of American exceptionalism is only the first step to utilizing this important issue of the Phyllis Schlafly Report. We must stand against any attempts to take that freedom away through burdensome regulation or replacing our nation’s unique first-to-invent system with a much worse first-to-file system. We must stand with President Trump against countries that would violate our patent system and pirate our intellectual property. Finally, we should cherish our Constitution as the truly revolutionary milestone it is. The freedom to invent is just one more reason to celebrate our spectacular founding document and the inspired men who wrote it.

To view the July 1997 Phyllis Schlafly Report in its entirety, please click on the image below. 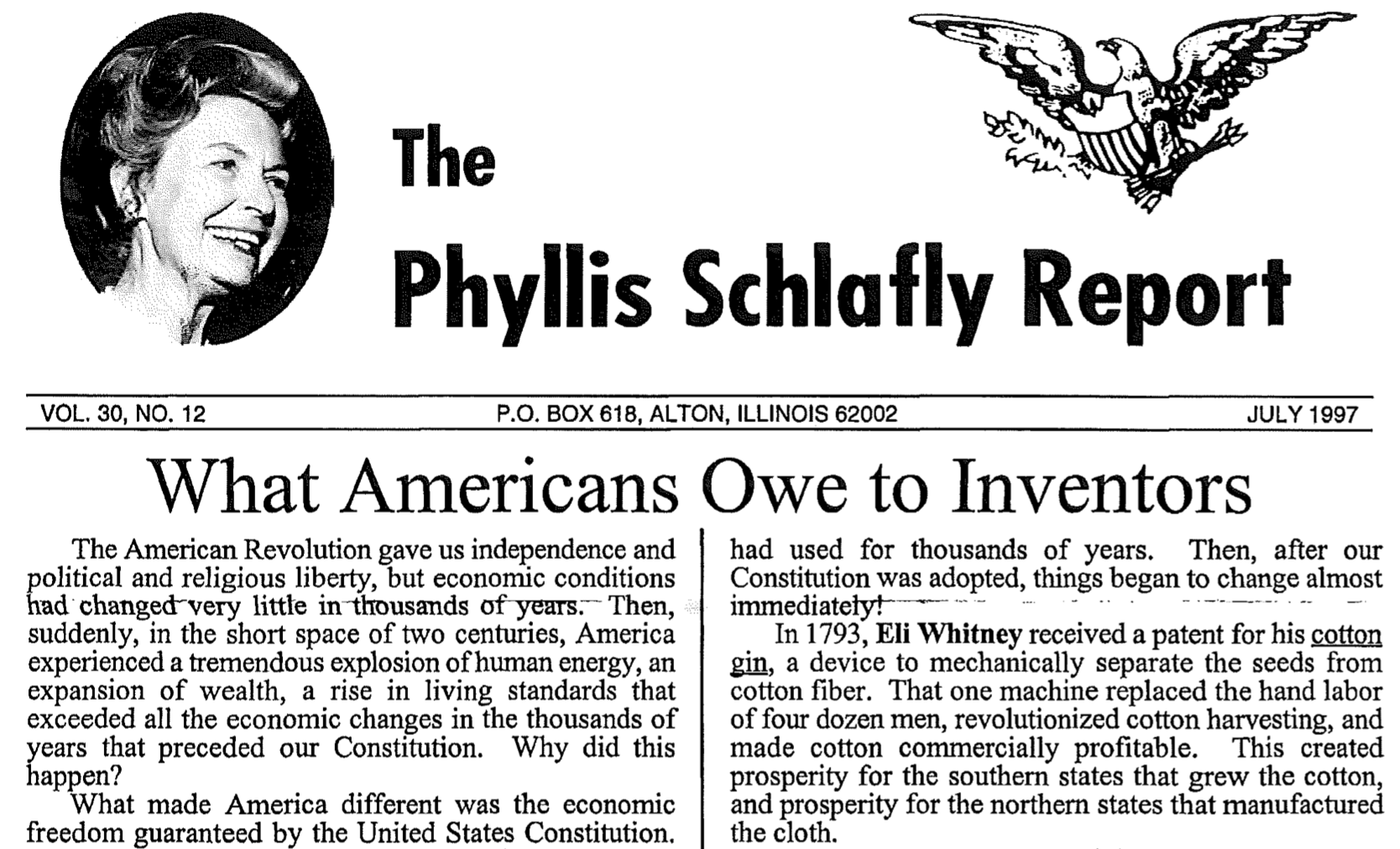 What You Need to Know is Montpelier is going Woke. Soledad O’Brien is now on the board of directors of Montpelier, James Madison’s home. She is part … END_OF_DOCUMENT_TOKEN_TO_BE_REPLACED

Phyllis Schlafly Eagles · #WYNK: Montpelier is going Woke | May 19, 2022 #ProAmericaReport The following is a transcript from the Pro America … END_OF_DOCUMENT_TOKEN_TO_BE_REPLACED

What You Need to Know is our election system is broken! It's failing and We the People have no confidence in the system. Pennsylvania has shown again … END_OF_DOCUMENT_TOKEN_TO_BE_REPLACED

Phyllis Schlafly Eagles · May 23 | Leftism Weakens America Thanks in large part to the culture of the mainstream media, many people have tunnel … END_OF_DOCUMENT_TOKEN_TO_BE_REPLACED