Long before President Trump could come in and tear down the walls of political correctness, someone had to build those walls. The May 1992 Phyllis Schlafly Report chronicles the rise of political correctness in American society. It clearly lays out who the original PC culprits were and how they began their campaign to silence the truth across our nation. As we continue to wage the fight against the politically correct forces of the Left, let’s arm ourselves with the on-the-ground insight of Phyllis Schlafly.

The influx of political correctness, like so many liberal trends, began on the campuses of universities and colleges around America. The influence of the Left on college campuses has always been rampant and well-chronicled by the Phyllis Schlafly Report. From the affirmative action codes that keep students from getting in to the course requirements in diversity studies that impede student from getting out, no student can escape the liberal ideology that permeates every level of the academic world. From the ivory tower separating them from reality, the ideologues of the Left created a model of controlled speech that eventually bled out into the political sphere and every aspect of American life.

With their largely taxpayer-funded campuses as their sandbox, the academics of the Left began the assault on liberty when the campus rioters of the 1960s joined their ranks. They began to emphasize multiculturalism over education and reject traditional values purely because historic proponents of them like the Founding Fathers are predominantly “dead white European males.” Despite the rhetoric of the academic Left, they do not fight for inclusion, but for exclusion of ideas with which they disagree. As Phyllis wrote, “The tenured radicals no longer have to take to the streets; they control the university administration, policies, and curriculum, and they are trying to coerce others to conform. These new intolerant P.C. censors attack not only the opinions of those who disagree with them, but the right to disagree.” On the campuses where Leftists rule the roost, opposing view are not only unfashionable, they are intolerable.

Of course, not all college educators fall into the liberal mold. In fact, there are many independent-thinking conservative professors who are suppressed by a system stacked against them just as much as their students are. Both are subjected to restrictions on every area of life. Phyllis wrote that “Under a Political Correctness regime . . . everything must be seen as political.” Through the Phyllis Schlafly Report, she exposed colleges like University of Wisconsin and their broad categorization of jokes as “discriminatory comments.” She also reported on the University of Connecticut’s ban on “inappropriately directed laughter.” Any regime that would go so far as to restrict speech, beliefs, and even laughter are doubtlessly Orwellian to the extreme.

A generation later, we can all see the effects of experimentation with political correctness on college campuses. The politically correct thought police have invaded almost every area of American life. The military implements sensitivity training for troops while employers punish employees with sensitivity training if they do not toe the PC line. College campuses have devolved into chaos as Antifa rioters block conservative speech and even physically assault fellow students for the crime of agreeing with our nation’s own president. The state of our nation today proves that the logical conclusion of political correctness is the forceful suppression of free speech and public discourse.

Thankfully, Phyllis Schlafly did much more than write about the problem. She became a part of the solution. While the PC Left enforces their speech codes in the political sphere through fear, Phyllis was not afraid to proclaim the truth from a position of confidence and reason. She also recognized fellow patriots like Donald Trump who could cut through the political correctness to stand for our values and principles. Knowing that our PC culture comes from the bastions of liberal academia which are entirely disconnected from reality, we must coalesce around the banners of free speech and public discourse on college campuses and everywhere. That is the only way to train up the next generation of innovative and independently thinking Americans.

To view the May 1992 Phyllis Schlafly Report in its entirety, please click on the image below. 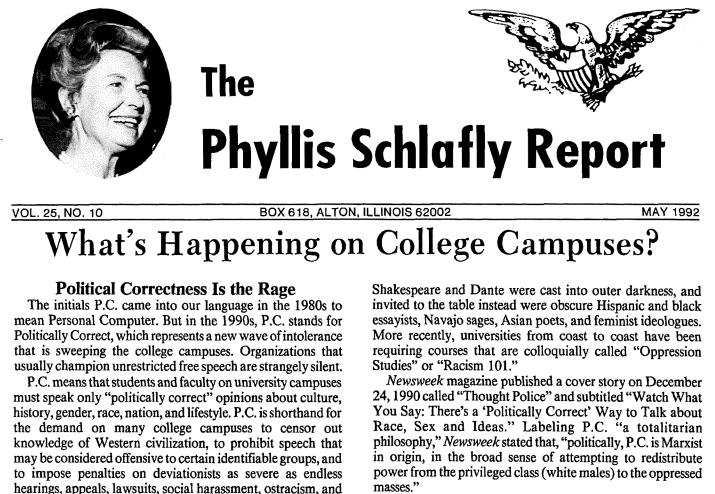 What You Need to Know is The Narrative Machine is Obsessed with Trump! First, it used to be called the Trump Exhaustion Syndrome now the left is … END_OF_DOCUMENT_TOKEN_TO_BE_REPLACED

What You Need to Know to Understand is the danger of the Narrative Machine! Read this article from Tablet Magazine to help understand the connection … END_OF_DOCUMENT_TOKEN_TO_BE_REPLACED

Phyllis Schlafly Eagles · #WYNK: Religious Liberty is Under Attack | September 13, 2022 #ProAmericaReport The following is a transcript from the … END_OF_DOCUMENT_TOKEN_TO_BE_REPLACED

What You Need to Know about Open Lawfare against We the People. Biden seems to misunderstand his position as President. If he were king, then … END_OF_DOCUMENT_TOKEN_TO_BE_REPLACED

Phyllis Schlafly Eagles · #WYNK: Biden is Lawless and Dividing | August 25, 2022 #ProAmericaReport The following is a transcript from the Pro … END_OF_DOCUMENT_TOKEN_TO_BE_REPLACED

What You Need to Know is that one of the highest priorities for Americans right now is election integrity. The left has admitted to spending hundreds … END_OF_DOCUMENT_TOKEN_TO_BE_REPLACED

Phyllis Schlafly Eagles · September 28 | The Politicization of the School Lunchroom There are all kinds of labels on food these days. You may have … END_OF_DOCUMENT_TOKEN_TO_BE_REPLACED

Phyllis Schlafly Eagles · September 27 | Do Politicians Care About Teachers? Promises are easy to make and hard to keep, especially in politics. If … END_OF_DOCUMENT_TOKEN_TO_BE_REPLACED

Phyllis Schlafly Eagles · #WYNK: Ray Epps Was In On It! | September 27, 2022 #ProAmericaReport The following is a transcript from the Pro America … END_OF_DOCUMENT_TOKEN_TO_BE_REPLACED

What You Need to Know is Ray Epps was in on it! Who is Ray Epps? Congressman Jamie Raskin gave us the answer after the prompting by Congressman Thomas … END_OF_DOCUMENT_TOKEN_TO_BE_REPLACED