It goes without saying that we Americans have a lot to be thankful for. For starters, we live in the greatest nation on the planet. Let’s also not forget that we enjoy the freedom and liberty secured in our unprecedented United States Constitution. In a few short days, we can also be thankful for a time to spend with family and loved ones reflecting on God’s bounty in our lives. Each of these blessings should remind us of one man to whom every American owes a debt of gratitude. That man, who is being systematically removed from the public sphere, was passionately defended in the May 2002 Phyllis Schlafly Report. His name is George Washington.

In an age where figures from history are being expunged by a new wave of political correctness, it is almost not surprising that the father of our nation would be a ready target. Even for those in liberal academia who cannot find a substantial blemish on his morally impeccable life, the general trend is to downplay the role of founders like George Washington in favor of a more accusatory and pessimistic view of American history. Rather than praise the heroes that made America great, academics want to focus on the dark spots in our history like slavery and Japanese internment.

While this might seem like just one more way to view America, it has some very nefarious implications. When we only teach children the bad parts of our history, we are instilling in them a disdain for America and American culture. This disdain creates a snowball effect of unpatriotic behavior. We can see this playing out on football fields around the country as NFL players disrespect the very nation that has allowed them to prosper and gain wealth. When young boys who consider football stars to be their heroes see this sort of behavior, it only reinforces the anti-America rhetoric they hear every day in history class.

The ultimate danger of this anti-America viewpoint is that it will lead to the corrosion of freedoms we enjoy as a nation. If people believe that our Constitution has nothing good to offer, they surely will not preserve it. If people believe that America was not founded as a Christian nation, we are certain to lose our moral compass. If people believe that George Washington was a marginal or even antagonistic figure in our history, his work will be preserved no better than his good name.

This Thanksgiving, let’s talk about the good things that happened in American history and the good people who made them happen. As Phyllis Schlafly put it, “George Washington was history’s indispensable man. It’s no exaggeration to say that, without his leadership, we would not have a United States of America.” He even gave us the gift of a Thanksgiving holiday by issuing a proclamation in 1789 making the last Thursday in November “a day of public thanksgiving and prayer” on which Americans should thank Almighty God for granting us “an opportunity peaceably to establish a form of government for their safety and happiness.” Only through the providential protection of a sovereign God and the bold actions of His servants could we have inherited the blessing of this great nation of ours. On this special day dedicated to the remembrance of our many blessings, let us not forget the blessing of a heritage of freedom handed down to all Americans from men like George Washington.

To view the May 2002 Phyllis Schlafly Report in its entirety, please click on the image below. 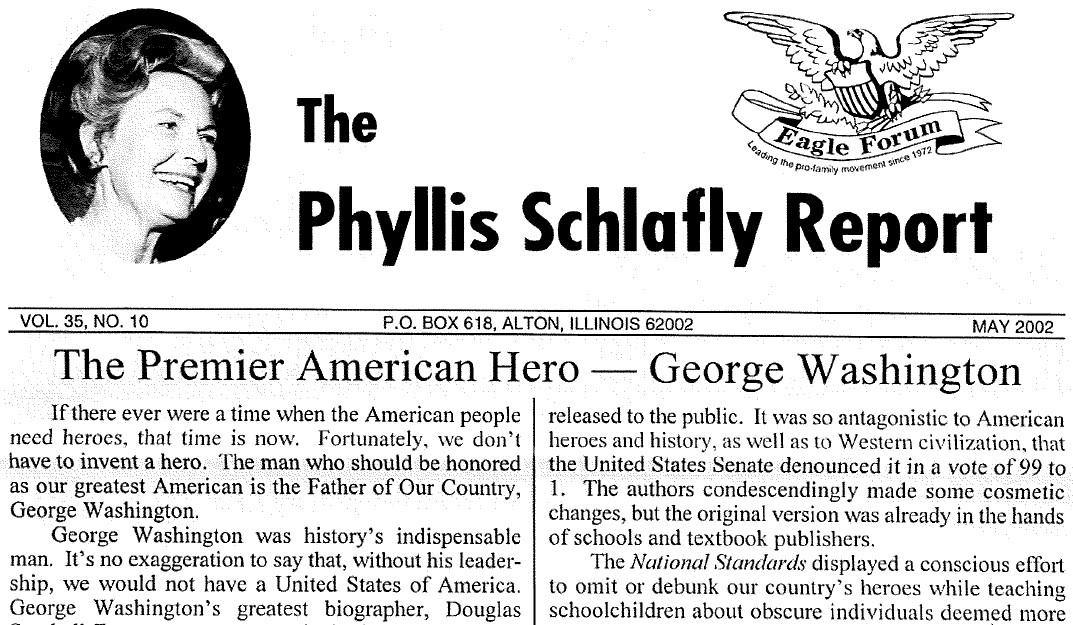 What You Need to Know is the importance of Draining the Swamp! We watched as the Senate had hearings and then confirmed Justice Ketanji Brown Jackson … END_OF_DOCUMENT_TOKEN_TO_BE_REPLACED

What You Need to Know about Hoaxes! Brian Stelter, chief media correspondent for CNN, was recently asked by a college freshman why all these hoaxes, … END_OF_DOCUMENT_TOKEN_TO_BE_REPLACED

For Immediate Release: May 10, 2022Contact: Ryan Hite, Communications Director Concerned Parents Are the Driving Force of Local and Midterm … END_OF_DOCUMENT_TOKEN_TO_BE_REPLACED

Biden’s Plan to Buy Votes  As the midterm elections fast approach, Democrats have lost a key demographic that they relied on in 2020: … END_OF_DOCUMENT_TOKEN_TO_BE_REPLACED

For Immediate Release: May 16, 2022Contact: Ryan Hite, Communications Director The Power of Grassroots Is Surging and Winning All Across the … END_OF_DOCUMENT_TOKEN_TO_BE_REPLACED