The most frequent refrain in Bill Clinton’s speeches is his repeated assertion that he is going to sock it to the rich, whom he defines as those “over $200,000.” They are the whipping boys whom Clinton says he will tax in order to pay for his “investment” in the grandiose spending programs he has been promising.

Clinton’s lead in the polls indicates that most people have inferred that ‘over $200,000″ doesn’t apply to them personally. It must apply to some fat cats somewhere e1se, probably just those overpaid, over-perked corporation presidents.

But there are not enough fat cats in the country whose income is “over $200,000” to finance any new program or make a dent in the federal deficit. So, how can we explain Clinton’s game plan?

Clinton just hasn’t told the whole truth about how he defines “over $200,000.” If he can get by with concealing the rest of the definition until after November 3, we will all be in for a January surprise.

You see, there is another meaning of “over $200,000″ which the liberal Democrats will unfold after the election. They are planning to have the Federal Government tax not just the income, but the lifetime savings of everyone in America who has accumulated “over $200,000″ in property of any kind: cash, bank accounts, investments, farm, or small business.

This plan is carefully hidden in companion bills (H.R. 4848 and S. 257L) pending this year in Congress, but which the Democratic majority decided to hold in committee and not bring up for a vote until after the election. This is clearly a Democratic leadership proposal, sponsored in the House by Majority Leader Richard Gephardt (D-MO) and in the Senate by Majority Leader George Mitchell (D-ME).

What these bills would do is reduce from $600,000 to $200,000 the amount of property any American can leave tax-free at death to the next generation. It’s simple and straightforward: when you die, everything you own will be added up and the Clinton tax collector will take a big bite (ranging from 32 to 55 percent) of everything “over $200,000.”

This drastic change in the federal estate (inheritance) tax will confiscate nearly half of the life savings of millions of middle-class Americans. It won’t matter whether your life savings are in a home or a farm or a small business or a bank account, the Clinton tax collector is coming to get you.

Just think of the millions of Americans who have worked hard all their lives, been thrifty, bought and improved a residence, plowed their fields built a litt1e business that supports their family, and hope to leave a nest egg to their children – which surely is a major incentive to work hard, save and invest. In an era when the average home is priced at over $100,000, those who have accumulated “over $200,000″ after paying income taxes are not “the rich,” and they do not deserve to have their savings grabbed. to finance Clinton’s and Gore’s extravagant spending programs.

Reducing the threshold for the federal estate (inheritance) tax to $200,000 is only the first step planned by the liberal Democrats. According to a Brookings Institution study, this and several other increases in taxes paid at death by the parents of the Baby Boomers will net the Federal Government $50 billion a year in new revenues. That’s quite a windfall for the liberals to spend!

The way that this plan to confiscate the after-tax savings of hard-working middle Americans has been concealed from public scrutiny is a story unto itself. The Gephardt-Mitchell proposal is craftily concealed in 20 lines (Title II, Sec. 203) buried deep in a bill of 4,766 lines about another subject!

H.R. 4848 is called the “Long-Term care Family Security Act of 1992.” The stated purpose of this 233-page bill is: “To amend the Social Security Act to assure universal access to long-term care in the United States, and for other purposes.” Who would guess that the “other purposes” are to grab half the life savings of all Americans who have “over $200,000”?

This is just the kind of devious doubletalk that slick Willie is so good. at. He can demagogue around to promote envy against people “over $200,000,” but, he doesn’t tell you that his definition of “over $200,000″ includes lifetime savings, not just annual income.

Bill Clinton has not endorsed this bill in his campaign speeches. He is too smart for that. But it is not believable that President Clinton would veto a major bill sponsored and passed by his Democratic leadership in both the House and the Senate, especially when it would provide billions of dollars to finance his and Al Gore’s pet projects – everything from socialized medicine to cleaning up the environment of the whole world.

The veto power of President George Bush is the only thing that can protect us from the greedy fingers of the liberals who lust to spend our life savings.

As the midterm elections fast approach, Democrats have lost a key demographic that they relied on in 2020: college-educated men. The biggest … END_OF_DOCUMENT_TOKEN_TO_BE_REPLACED 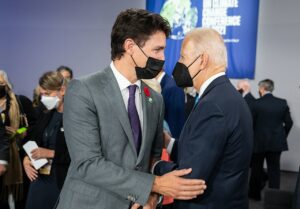 For Immediate Release: August 12, 2022Contact: Ryan Hite, Communications Director Washington, D.C.: "Even as all attention has been on the … END_OF_DOCUMENT_TOKEN_TO_BE_REPLACED

Phyllis Schlafly Eagles · July 29 | Say No to Stakeholder Capitalism What is the purpose of a business? If I were to ask that question at any other … END_OF_DOCUMENT_TOKEN_TO_BE_REPLACED

Phyllis Schlafly Eagles · August 19 | Abortion Poll Gives Confusing Results When it comes to polling, the answers you get depend on the questions … END_OF_DOCUMENT_TOKEN_TO_BE_REPLACED