Members of the Students for Life chapter at Kutztown University of Pennsylvania have compelled university officials to agree to stop censoring student speech based on “content.” This victory comes after an employee was caught erasing the groups’ pro-life messages written during National Pro-Life Chalk Day in March. School officials claimed that the incident was simply a misunderstanding, but the students and conservative advocates like Alliance Defending Freedom were skeptical. 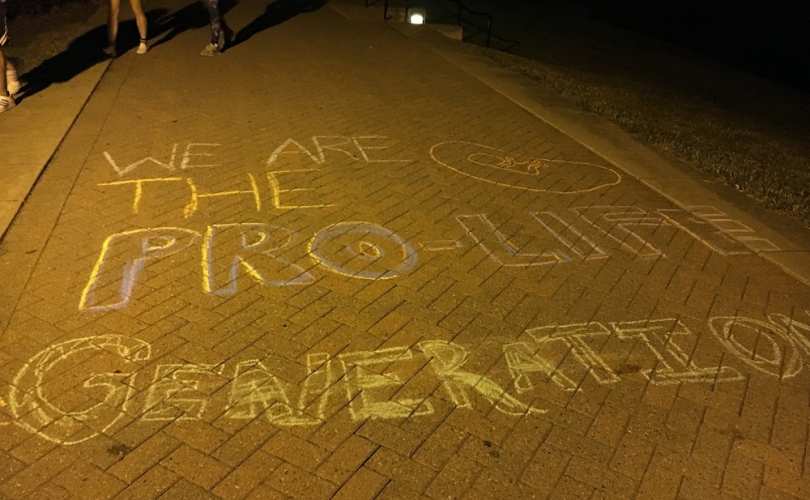 When the students encountered the school employee washing their messages away, they objected, only to be informed that he was just “following orders.” The school’s policy broadly permits chalking on “sidewalks and other uncovered walkways,” but imposes restrictions on content that is “incompatible with the University’s Statement on Non-Discrimination.” This prompted Alliance Defending Freedom to send a letter to the administration, pointing out that the U.S. Supreme Court has ruled such content-based restrictions as “presumptively unconstitutional.” ADF said in a statement: “Under the initial guidelines, the university could have censored a huge number of messages that officials didn’t find palatable, and that’s what happened with Students for Life.”

School officials insisted that the university “supports free speech, including through our posting and chalking policy,” but they did confirm to the media that the school’s free speech policies have been revised to “better reflect our support for free speech.”

College campuses should be places where ideas can be exchanged and free speech can be exercised. Students should not be intimidated into silence because an administrator might not agree with their views, or simply have their free speech washed away.

Kristin Hawkins, president of Students for Life of America and friend of Phyllis Schlafly, addressing this incident, saying: “Too frequently we see that public colleges and university feel they can engage in censorship of a student group just because officials don’t agree with the viewpoint of those students. Playing favorites while stifling free speech is, sadly, an all-too-common response of abortion advocates who prefer silence opposition rather than a free exchange of ideas.”

From speech zones to safe spaces, the First Amendment right of free speech has now become an endangered species on most college campuses.

What You Need to Know is The Narrative Machine is Obsessed with Trump! First, it used to be called the Trump Exhaustion Syndrome now the left is … END_OF_DOCUMENT_TOKEN_TO_BE_REPLACED

What You Need to Know to Understand is the danger of the Narrative Machine! Read this article from Tablet Magazine to help understand the connection … END_OF_DOCUMENT_TOKEN_TO_BE_REPLACED

Phyllis Schlafly Eagles · #WYNK: Biden is Lawless and Dividing | August 25, 2022 #ProAmericaReport The following is a transcript from the Pro … END_OF_DOCUMENT_TOKEN_TO_BE_REPLACED

What You Need to Know is that one of the highest priorities for Americans right now is election integrity. The left has admitted to spending hundreds … END_OF_DOCUMENT_TOKEN_TO_BE_REPLACED

What You Need to Know is President Biden is Targeting Republicans! President Biden has given a speech saying that if anyone supports Trump they are … END_OF_DOCUMENT_TOKEN_TO_BE_REPLACED

Phyllis Schlafly Eagles · August 31 | Men and Abortion Among the many good things to come out of the Dobbs decision by the Supreme Court, the … END_OF_DOCUMENT_TOKEN_TO_BE_REPLACED

Phyllis Schlafly Eagles · September 28 | The Politicization of the School Lunchroom There are all kinds of labels on food these days. You may have … END_OF_DOCUMENT_TOKEN_TO_BE_REPLACED