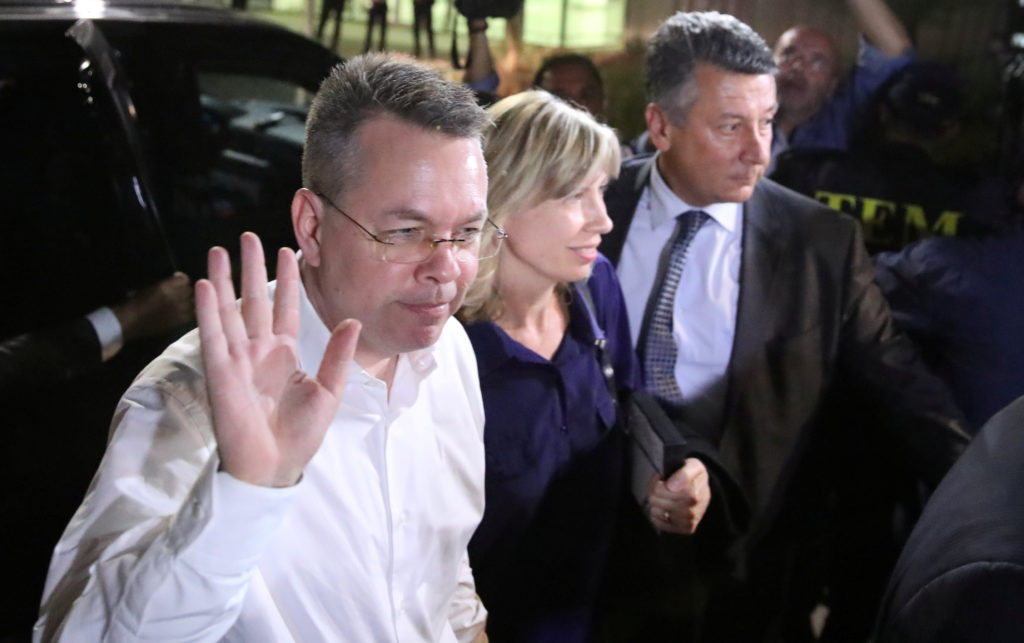 Many have seen the news that American Pastor Andrew Brunson, who was held prisoner in Turkey for two years, was released and returned to the United States last month. It’s important to understand this is victory for U.S. foreign policy and relations, and it’s a story that you won’t hear from most major news outlets.

Pastor Brunson has been doing ministry work in Turkey for over 20 years, until he was imprisoned and charged as a conspirator in an attempted military coup two years ago, without any satisfactory evidence. Since taking office, the Trump Administration has been working to secure his release.

Above any foreign or globalist interests, the Trump White House is putting American citizens first.

Finally in July, after mounting tensions and pressure from the United States, the Turkish government moved Pastor Brunson to house arrest, but that was not good enough for an innocent man. Vice President Pence issued a strong Warning in July on behalf of the administration saying “While out of jail, he is still not free. And to President Erdogan and the Turkish government, I have a message on behalf of the President of the United States of America: Release Pastor Andrew Burnson now or be prepared to face the consequences. If Turkey does not take immediate action to free this innocent man of faith and send him home to America, the United States will impose significant sanctions on Turkey until Pastor Andrew Brunson is free.”

When the Turkish government did not listen, President Trump followed through on their promise and imposed tough economic sanctions against Turkey in August. Only after further threats did the Turkish court agree to release Pastor Brunson, under continued protest by the government prosecutors.

The Trump administration could have – as many previous presidents – pursued a globalist agenda and put good relations with Turkey and NATO at the top of the list. Instead, they chose to put the Americans first. Plenty of presidents have claimed to support Christians and American Citizens, but the Trump Administration has established a solid track record of defending their citizens abroad. Above any foreign or globalist interests, the Trump White House is putting American citizens first.

What You Need to Know is Joe Biden is bottoming out. It’s just epic and astonishing how badly the administration is failing to adjust to the fallout. … END_OF_DOCUMENT_TOKEN_TO_BE_REPLACED

What You Need To Know about the 2 vaccine mandates. Andrea Kaye, guest host of the #ProAmericaReport, explains how SCOTUS is adding another day to … END_OF_DOCUMENT_TOKEN_TO_BE_REPLACED

What You Need To Know is January 6th has been politicized. Andrea Kaye, guest host of the #ProAmericaReport, talks about January 6th as we go into the … END_OF_DOCUMENT_TOKEN_TO_BE_REPLACED

Phyllis Schlafly Eagles · December 3 | Christmas By The Numbers After a nearly yearlong ceasefire, America has once again been plunged into the War … END_OF_DOCUMENT_TOKEN_TO_BE_REPLACED

If the education establishment wants to know why public schools don't get much respect from our citizenry, they need look no further … END_OF_DOCUMENT_TOKEN_TO_BE_REPLACED

Robert Strange McNamara belongs on the daytime soap operas. Better yet, his histrionics belong on Donahue or Geraldo or Sally Jesse Raphael. We are … END_OF_DOCUMENT_TOKEN_TO_BE_REPLACED

The dramatic exit last Friday by Rep. John Katko (R-NY), who announced he would not run for reelection, may have shocked liberals but was no surprise … END_OF_DOCUMENT_TOKEN_TO_BE_REPLACED