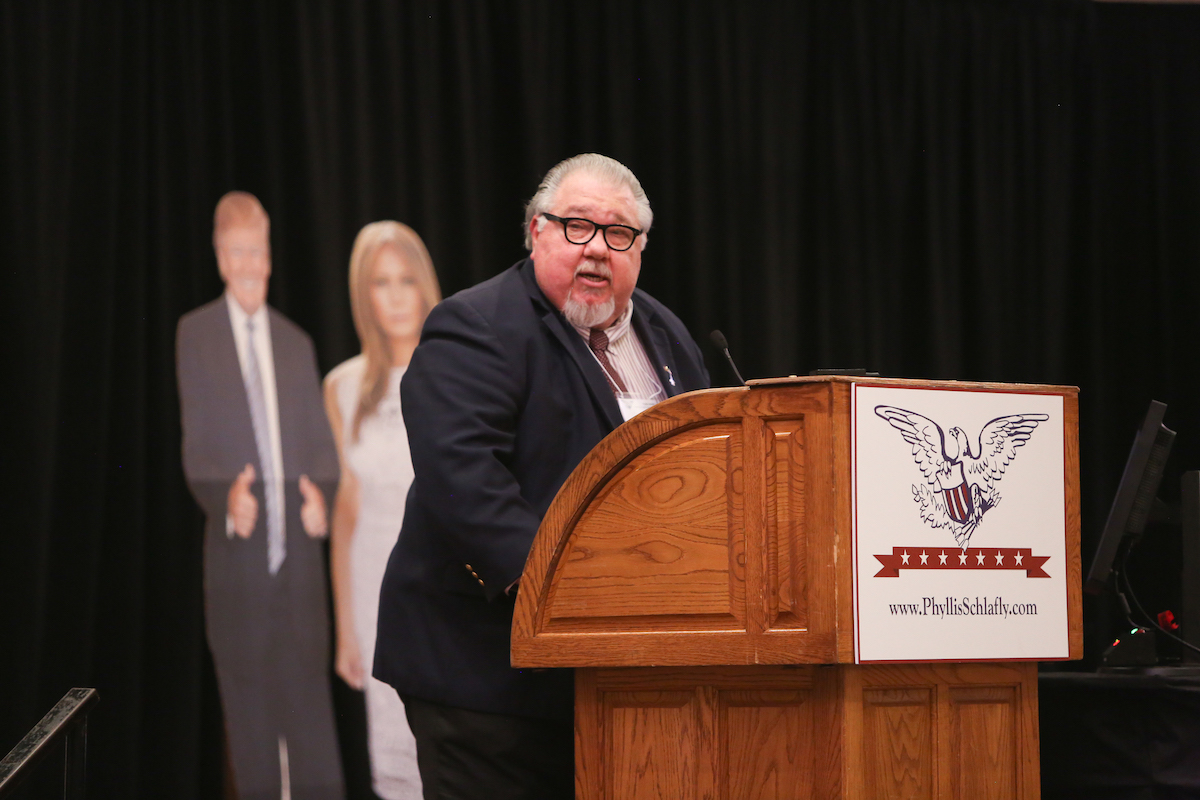 More than 600 attendees joined Gateway Eagle Council XLVII in St. Louis over a three-day period from Friday, September 14 to early afternoon on Sunday, September 16. Jim Hoft, Gateway Pundit, one of the most influential conservative websites in US politics, joined Eagle Council XLVII, founded by Phyllis Schlafly in 1972, for this leading mid-America conservative conference. See here this year’s lineup of top American and European conservative leaders who provided amazing insight about issues facing this nation and in Europe.

The tone for the late Phyllis Schlafly’s amazing 47th Eagle Council was set from the start, when five well known conservatives spoke in succession under the heading “President Trump is Winning.” This year’s event was held in what the Marriott St. Louis Airport hotel refers to as the “Grand Pavilion”, but Eagle Council referred to it as the “Presidential Pavilion” because of the many presidential hopefuls it hosted there in 2015.

Three of the five notable speakers appear below in order of their presentations: Ralph Reed, Stephen Moore, and Sam Clovis.  Part 2 will feature James O’Keefe and Charlie Kirk. All offer rare insights into Trump’s pre-election campaign, with speculation as to what lies ahead.

Ralph Reed, in speaking about what happened at the 1996 Republican Convention in San Diego, spoke of an attempt to water down the pro-life plank of the Republican Party by presidential candidate Bob Dold. Reed related how the tolerance plank amendment Dold wanted to attract more moderate voters was withdraw due to a lack of votes.  As Reed said: “When you have the votes you can do whatever you wish.  When you don’t have the votes, you are powerless and limited as to what can be done.

As to Reed’s support of candidate Trump, Trump was never the lesser of two evils for him. Reed went on to state three significant (pivotal) moves Trump made as a candidate to secure his election.

In speaking about the Democrat Party, Reed mentioned these two main goals:

Reed is determined to bring out the largest church vote ever in November, targeting 30 millions voters.  He is also sending out millions of Voter Guides and will be tracking early voting for key House races in ND, MO, MT, IN, FL, NE, TN, and TX.  In the 2016 elections, 81% of Christian conservatives voted for Trump.  As Reed said, “We must make sure that the media is shocked one more time at the mid-terms.”

As one who worked in the Reagan White House, Steve Moore revealed that prior to Trump’s election he worked in the Trump campaign, often with the next featured speaker, Steve Clovis, as his partner.  Moore is known for his humor, which was reflected by the following incident related by him.  Moore was on CNN the night Stormy Daniels charges broke against candidate Donald Trump.  When Moore was asked about the charges, not having had a chance to process the claim, Moore blurted out the first thing that came to his mind: “Who would have thought a stripper would want attention?”, to which no liberal laughed.

Steve gave thanks to Sam Clovis for getting him involved in the Trump campaign in January of 2016.  Clovis and Moore did many events together for Trump, such as seeing only Trump signs when driving together through small communities in Ohio.

Early on Moore learned that “Government is not the solution, but instead the problem.”  According to Moore: “Never again should we ever bail out a bank or an industry.”  Said Moore:  Because Obama added $10 trillion to the debt after eight years in office, we are now $20 trillion in debt.  According to Moore, growth is what the Trump economy is all about, citing an economy that is growing at a rate of 4-1/2%.

Just what does Moore call the Trump effect? The day Trump was elected president, only 3 out of 10 thought the economy was great. Today it’s 7 out of 10.  Moore feels if the economy continues to do well, Trump could win 40 states in 2020. Deregulation by 30% has helped spur the economy.

Moore described Trump as a master deal maker, and he’s winning on trade.  As Moore stated: “The world is laughing at us for our existing lopsided trade practices. We want trade, but fair trade.” Trump realizes that China is not a friend or an ally; it’s an enemy.  Moore predicts that by the end of the year China will come to us and make a deal to reduce our $300 billion trade deficit. We produce more oil and gas than any country in the world, but Trump isn’t looking for “enemy independence”; he wants “energy dominance.”  We have plenty of natural gas which is clean burning.

Moore spoke of the DMC as just “a line in the sand.”  North and South Korea are the same in every way. 50 years ago, one went the way of Socialism, the other embraced capitalism. According to Moore: “Thirty Democrats are running as Socialists today.”

Trump has also succeeded in reducing business tax rates, which were way too high.  He saw how other countries had cut their tax rates to 20%, while ours remained at 40%. Trump initially wanted a corporate tax rate of 15%, not 20%.  As a master negotiator, Trump started at 15% and finally ended up at 20%.  Trump’s tax cuts were never about the rich, but about helping the middle class. Moore gave credit to Sam Clovis for drawing up the tax cuts, realizing that if tax rates go down, revenues go up.

The Search for Accountability in the Swamp

Sam Clovis became an admirer and friend of Phyllis Schlafly’s years ago, as she was a conservative and not afraid of being one.  Clovis was initially helping Rick Perry when a call came from the Donald Trump campaign asking for his help. Trump respected Clovis’ decision, telling Clovis that if Perry’s campaign ever went south, he should remember him.  With Perry’s withdrawal as a candidate, Clovis’ work for Trump started early on. Clovis even had his own introductory music for his Trump speaking engagements: “Bat Out of Hell”.  Clovis spoke of a Sept. 2015 interview with Anderson Cooper in which he was asked to speak about Trump.  Never having done an interview before, Sam was told to just stand there and talk, which he did. This is important, because the only guidance Clovis ever received when working for Trump was to do what is in the best interest of the candidate.

Sam Clovis never dreamed of being part of the Donald Trump experience. He had the opportunity to work hard and long and to witness Trump’s victory.  Clovis sees Trump as one who will change this nation.  He also believes Trump is more conservative than Ronald Reagan.

Clovis related how accountability within a swamp is a difficult task.  He then spoke about our written Constitution as a document that sets forth the law of the land and provides order through checks and balances.  “If the Constitution were followed”, said Clovis, “we wouldn’t have the problems we are now facing.”

As to Clovis’ biggest disappointments, he stated two:

Clovis believes that accountability rests with “We the People.” To drain the swamp, we must make the people we elect accountable to their promises.  Clovis, when sitting down with Trump (his boss), informed Trump to “always tell the truth.  The people will respect you for it.  If there are questions, go to your people to find out what they want. They will inform.  We are working for you because you scared the hell out of Hillary Clinton.”

President Donald Trump nominated Sam Clovis to be USDA undersecretary for research, education and economics, but Clovis had to withdraw his name from consideration before the Senate Agriculture Committee could hold a confirmation hearing, after a torrent of criticism from Senate Democrats and environmental advocates.

Phyllis Schlafly Eagles · #WYNK: Religious Liberty is Under Attack | September 13, 2022 #ProAmericaReport The following is a transcript from the … END_OF_DOCUMENT_TOKEN_TO_BE_REPLACED

What You Need to Know about Priorities & America First. Phyllis Schlafly would give awards to significant people in her life. On these awards … END_OF_DOCUMENT_TOKEN_TO_BE_REPLACED