As President Trump pushes for his recently-released tax reform plan, it is the perfect time to take a second look at the July 1981 Phyllis Schlafly Report. Entitled “The Rightness of Reaganomics,” this article is a wonderfully clear treatise on why lower taxes help those of every socioeconomic status. As the fight over ERA came to a close in the early 1980s, Phyllis Schlafly’s work was far from over. On the contrary, her work was only just beginning. Just as we find ourselves today, Phyllis had to learn to transition from a defensive stance against a hostile administration to an offensive stance in support of a friendly administration. Studying the July 1981 Phyllis Schlafly Report can give us insight not only into tax policy, but also into the most effective way to keep a strong administration on the right track.

It is hard to think of another presidential administration that launched with as much strength as the Reagan administration. He came into office with a strong message and a strong mandate. His mandate was evident with his landslide victory over incumbent president Jimmy Carter with a margin of 489 Electoral College votes to Carter’s 49. His message was clear with such statements from the campaign trail as “I believe this nation hungers for a spiritual revival; hungers to once again see honor placed above political expediency; to see government once again the protector of our liberties, not the distributor of gifts and privilege.” When he took office in 1981, he wasted no time in taking the steps necessary to turn this vision into reality.

Phyllis Schlafly was a strong voice in favor of President Reagan’s bold plan. She made a clear case for the connection between lower tax rates and a growing economy. As she pointed out, higher tax rates are a disincentive for Americans to put money into the economy. If the tax on capital gains is too high, why would anyone take the inherent risks of investing in existing industries and new growth? High corporate tax rates create a hurdle for small businesses which may force them to close their doors or not open them in the first place. Most obviously, high personal tax rates create a disincentive for individuals to work hard to provide for themselves and their families. When corporations, small businesses, and individuals are permitted to keep more of what they have earned, a natural incentive is created to work harder and grow the economy.

Ultimately, high taxes inhibit productivity, which Phyllis Schlafly lauded as the primary characteristic of a successful economy. Phyllis went so far as to suggest that productivity become the banner under which conservatives rally in favor of Reagan’s policies. She explained this call by saying “Whether we are workers, bosses, or journalists, we all understand that increased productivity (producing more per manhour of labor) brings a higher financial reward.” She further explained how this value of productivity fits within the ideal of capitalism. “The uniqueness of our economic system has been its high level of capital formation – the investment in plant and equipment which creates jobs, enables worker-plus-machine to produce more per manhour and thereby pay higher wages.” Phyllis recognized productivity as the root of prosperity, and low taxes as the root of productivity.

Similarly, President Trump’s tax plan is posed to lower taxes and increase productivity for all Americans. This is not some far-flung academic theory; is has been done successfully before. When Reagan left office, the poverty rate was lower, the unemployment rate was lower, and growth of real GDP per capita was almost 50% better than under Carter. It is no wonder that Reagan was reelected by an even bigger margin in 1984, losing only Walter Mondale’s home state of Minnesota and the District of Columbia. You cannot argue with the numbers. We can see a similar triumph of conservatism in this generation, but we have to turn our country into the “productivity state” Phyllis Schlafly and Ronald Reagan envisioned in July 1981.

To view the July 1981 Phyllis Schlafly Report in its entirety, please click on the image below. 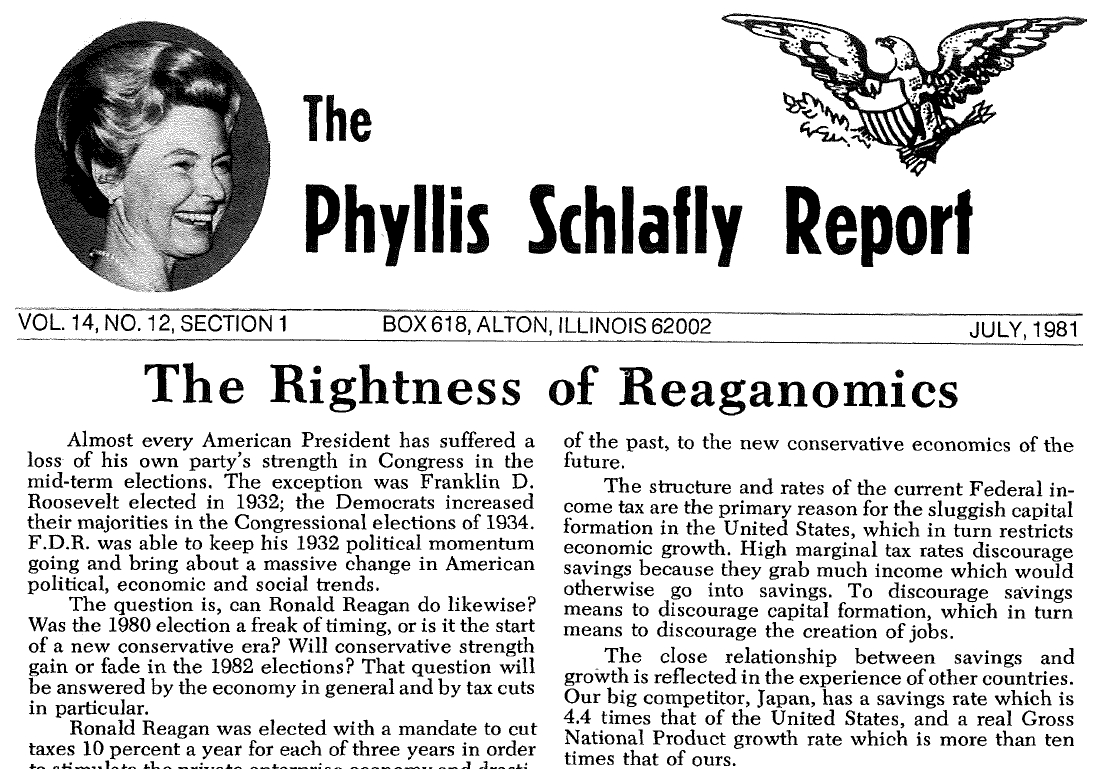 As the midterm elections fast approach, Democrats have lost a key demographic that they relied on in 2020: college-educated men. The biggest … END_OF_DOCUMENT_TOKEN_TO_BE_REPLACED

What You Need to Know is the media is finally reporting on the Southern Border! Governor Ron DeSantis and Governor Greg Abbott are forcing the media … END_OF_DOCUMENT_TOKEN_TO_BE_REPLACED

Phyllis Schlafly Eagles · #WYNK: Who Is Congressman Troy Nehls? | September 28, 2022 #ProAmericaReport The following is a transcript from the Pro … END_OF_DOCUMENT_TOKEN_TO_BE_REPLACED

What You Need to Know is The Narrative Machine is Obsessed with Trump! First, it used to be called the Trump Exhaustion Syndrome now the left is … END_OF_DOCUMENT_TOKEN_TO_BE_REPLACED

Phyllis Schlafly Eagles · #WYNK: Out of Control U.S. Spending & Debt | September 21, 2022 #ProAmericaReport The following is a transcript from … END_OF_DOCUMENT_TOKEN_TO_BE_REPLACED

What You Need to Know is U.S. spending and debt is disastrous. The government seems totally indifferent about the economic trouble they’re causing for … END_OF_DOCUMENT_TOKEN_TO_BE_REPLACED

What You Need to Know about Priorities & America First. Phyllis Schlafly would give awards to significant people in her life. On these awards … END_OF_DOCUMENT_TOKEN_TO_BE_REPLACED