St. Louis, MO: When the Equal Rights Amendment reared its ugly head again years after Phyllis Schlafly put it to rest in the 1970s, Phyllis was ready again to beat it back. She delivered testimony to the Illinois State Senate Executive Committee.

Today, May 7, at 10:00 a.m. the Illinois House Human Services Committee is meeting again to consider the failed Equal Rights Amendment after the State Senate foolishly passed it earlier this year. Mr. Jordan Henry, Research Director from Phyllis Schlafly's staff, will deliver her remarks from 2003 at the committee meeting today in Chicago. The State House must vote down this terrible measure again.

Below is the full testimony from 2003 that will be delivered again today:

*Testimony of Phyllis Schlafly to the  Illinois State Senate Executive Committee on H.J.R.C.A. #1, Equal Rights Amendment, on Thursday, May 29, 2003.*

"Mr. Chairman and members of the committee. My name is Phyllis Schlafly.  I  lived for 44 years in Alton, IL and still maintain an office there. Thank you for being willing to hear me today.

I  became interested in opposing the Equal Rights Amendment because it's basically so dishonest. It deceives women into thinking it will give them benefits, particularly in the area of employment. It will not give them any benefits in hiring, pay, and promotions. And you don't have to take my word for it.  I ask you to take the word of the leading advocate who is now Ruth Bader Ginsburg on the U.S. Supreme Court. She wrote a 230-page document that was published by the U.S. Commission on Civil Rights analyzing the effect of the Equal Rights Amendments on our laws. There is not one word about giving a single benefit to women in the field of employment because all lawyers know that our employment laws are sex neutral and there is nothing in the whole document about helping women in the field of employment. So it is really deceptive to tell women on television and in other forums that it is going to raise their pay or give you a promotion or a better break. There is no way it can do that.

ERA is also highly deceptive because it pretends to tell women it will put you into the Constitution. Now women are already in the Constitution to the same extent that men are. The Constitution is a beautiful sex neutral document. It doesn't talk about men or women. It talks about We the People and citizen and resident and President and Senator. The refrain about All Men are Created Equal, that's not in the Constitution, that's in the Declaration of Independence, and that's not what we are talking about amending. So it really is a deception of women.

This document by Ruth Bader Ginsburg, now on the Supreme Court, sets forth a lot of the mischief that ERA will do. Of course, she thinks that is a good thing. Yes, Congress can draft women today, but the politicians in Congress are not going to draft women because they know they'd never get by with that. However, what the Equal Rights Amendment would do, as set forth by Justice Ginsburg, is that it would require us to put women in all the combat jobs that men are in. In fact, she talks about giving affirmative action to get an equal number of women in the military as the men. And then of course, if the draft is ever reinstated as Congressman Charlie Rangel is trying to do, women would have to be drafted like men. There is nothing about 12-year-old girls.

ERA doesn't relate to age, it relates to sex. And that brings up the next point; there is nothing about women in the Equal Rights Amendment. It doesn't mention women, it only mentions sex. It calls for equal rights according to sex. And that is why it is perfectly obvious that it would require same-sex marriage licenses. If the City Clerk declined to give a marriage license to a man and a man, it is self-evident that you have discriminated on account of sex. I was on the platform with the Watergate Senator Sam Irvin, who was considered a Constitutional authority when he was in the Senate, and he said, I don't know any group that the ERA would benefit except homosexuals. Remember the word in the ERA is sex, it’s not women.

Now according to Ruth Bader Ginsburg and others, the feminists are very creative in using the word sex. And yes, we do have state Supreme Courts that have said, if you deny abortion funding, you have discriminated on account of sex because only women have abortions. And these ruling under the Equal Rights Amendment would not be made by the Illinois court; they would be made by the federal court. ERA is an open door to all kinds of legal mischief.

In fact, in this document, Ginsburg talked about how it would require us to eliminate all sex separation of any kind. We would have to sex integrate not only all schools and colleges but fraternities and sororities and even the Girl Scouts and the Boy Scouts. In other words, a Constitutional mandate would wipe out the reasonable exceptions that we have in the laws today and most of us think it is reasonable to have Boy Scouts and Girl Scouts. So I would suggest to you that they can't cite any benefits. The Illinois General Assembly debated this for 10 years from 1972 to 1982 and they were never able to show one single benefit that it will give to women, whereas we show all kinds of mischief that it can cause and be an open door for the lawyers to file all kinds of suits.

Now we hear about the Madison Amendment that was ratified after a century. But the Madison Amendment didn't have any time limit in it. The Equal Rights Amendment did have a time limit and when Congress extended the time limit they specifically recognized that it had another time limit. So to talk about ratifying it now is like going back to your high school reunion and trying to play the last quarter of the football game. It just doesn't make any sense. So I would suggest and urge to you that since there is no benefit and a lot of mischief that it can do, that it would be very sensible to vote no on this alleged ratification of the Equal Rights Amendment.

Thank you Mr. Chairman, I could go on but that's a brief summary." 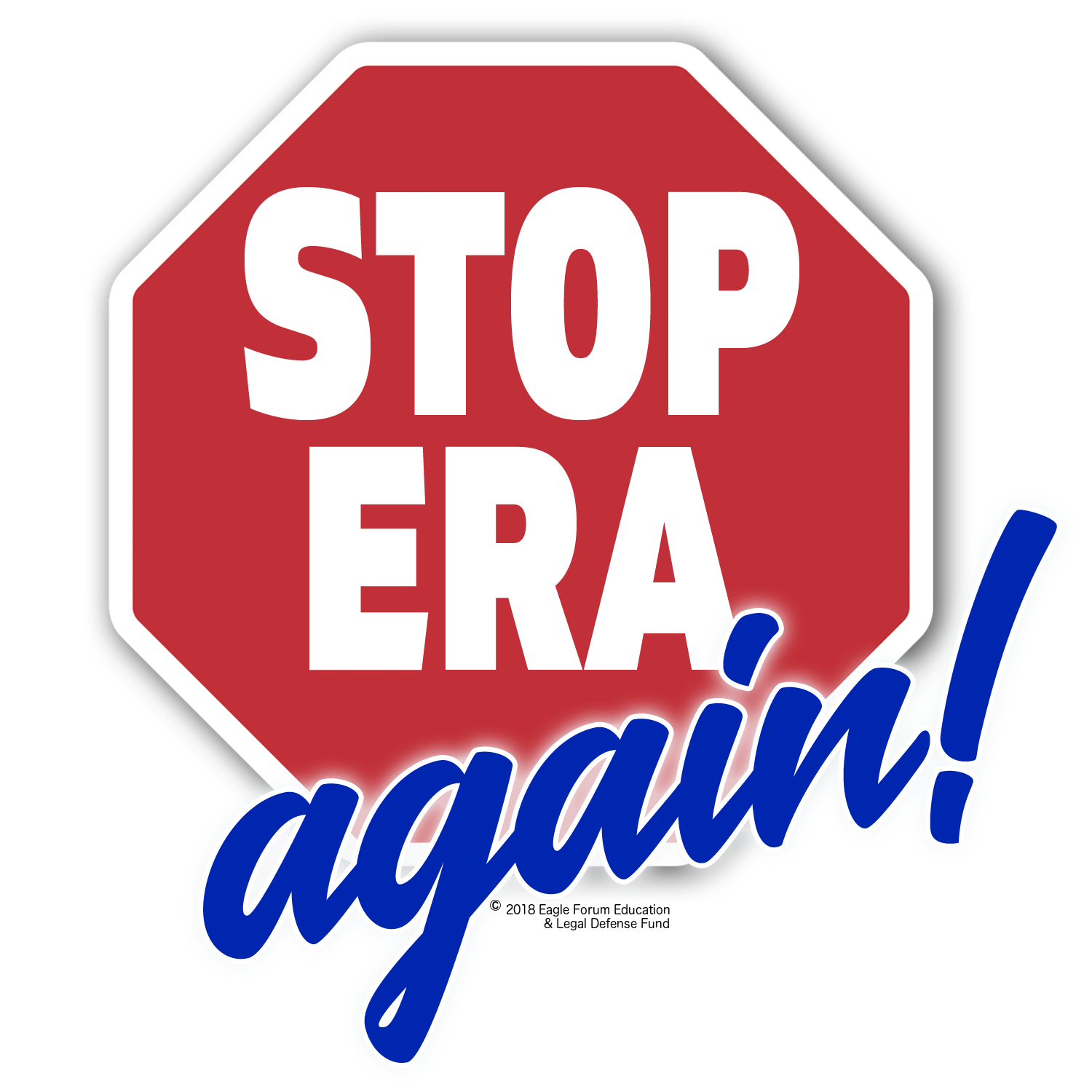 Phyllis Schlafly Eagles · August 31 | Men and Abortion Among the many good things to come out of the Dobbs decision by the Supreme Court, the … END_OF_DOCUMENT_TOKEN_TO_BE_REPLACED

What You Need to Know is Facebook is part of the Narrative Machine! Mark Zuckerberg admits that the FBI gave them a heads up back in 2020 that there … END_OF_DOCUMENT_TOKEN_TO_BE_REPLACED

What You Need to Know is Pelosi, pills, and pain. Pelosi has failed us again: she is the only dictator in American political life. She dominates the … END_OF_DOCUMENT_TOKEN_TO_BE_REPLACED

What You Need to Know is we are in a unique moment and Donald Trump is stepping up to it. Even some of the rabid leftists have to admit that President … END_OF_DOCUMENT_TOKEN_TO_BE_REPLACED

What You Need to Know is The Narrative Machine is Obsessed with Trump! First, it used to be called the Trump Exhaustion Syndrome now the left is … END_OF_DOCUMENT_TOKEN_TO_BE_REPLACED