Everyone has heard Barack Obama’s now-infamous promise to “fundamentally transform the United States of America.” While politicos can and will debate the “how” and “why” of the transformation for generations to come, it is difficult to deny the “what” of this transformation. In the May 2010 Phyllis Schlafly Report, Phyllis laid out the case for how America was transformed by the Obama presidency into a “two-class society.” She said that the two classes were those who paid money to the government and those who took money from the government.

In an evidence-laden warning call to America, Phyllis warned taxpayers of how their money was being used solely as a tool to benefit the Democrat political machine. Now that we have President Trump in office, it is important to work hard toward repealing those measures that served as Democrat pay-offs. Let’s look at the May 2010 Phyllis Schlafly Report and find out how to merge our “two-class society” into a unified American nation.

In 2009, 47% of American households paid absolutely no federal income taxes. In 2016, that number settled slightly to 44%. However, either number is staggering when you consider that all of those people receive the basic services of our government like roads, schools, police protection, and so on. The numbers are even more staggering when you consider that a great number of those households will actually receive money back from the government come April 15. In fact, more than 40% of American households got money back from the government in 2016 in addition to paying no income taxes. Programs like welfare, food stamps, housing subsidies, and many other programs are all at their disposal.

Not only are these facts outrageous on their face, but they also reveal a very sinister motive by those who support this system. A system where half of the nation pays no income tax really does create a two-class system. One class is the “Haves” and the other is the “Have Nots.” Drawing from the thoughts of Saul Alinski, Karl Marx, and others, President Obama and the Democrat Party positioned themselves in a way that would pit the “Have Nots” against the “Haves.” Of course, Democrats want poor people to think that the Republicans are the “Haves.” In the 2012 and 2016 presidential races, they exploited the wealth of the Republican candidate as a way to disconnect them from the 44% that do not pay taxes. Simultaneously, Democrats put themselves forward as the champions of the “little people” by offering to continue and expand welfare programs for those who pay no taxes.

While President Trump shattered their stranglehold of bread and circuses, the root of the problem remains. As with so many other political issues, the root of the problem comes down to the state of the American family. Democrats want to discourage marriage at every possible opportunity because they know 70% of unmarried women voted for Obama in 2008. As Phyllis wrote, “the Democrats and their feminist allies have decided that one of their major goals is to increase the number of single moms by increasing the flow of taxpayer-paid incentives that subsidize the non-marriage lifestyle.” That assertion fits hand-in-glove with the comment made by John Podesta, who said that the idea of a family with an active father and mother raising children is “outdated, stuck in the 1950s notion of a nuclear family that excludes too many of today’s nontraditional families.” As you can see, the Obama administration did not think highly of traditional American culture.

If we are to have real economic progress in America, we cannot let Democrats continue promising away the federal budget as a means to drum up votes. We need to debate the substance of the issues, not who can give away the most free stuff. Indeed, there is a place in our society for helping the poor. However, there can be no doubt that the current two-class system is not an indication of a healthy society. Phyllis Schlafly predicted that “the American people are not going to accept Obama’s transformation of our nation.” That prediction proved true with the election of President Trump. Now it is up to us to remind those in Washington that we are not going to take such mistreatment again. Our tax dollars shall not be used to buy the votes of others.

To view the May 2010 Phyllis Schlafly Report in its entirety, please click on the image below. 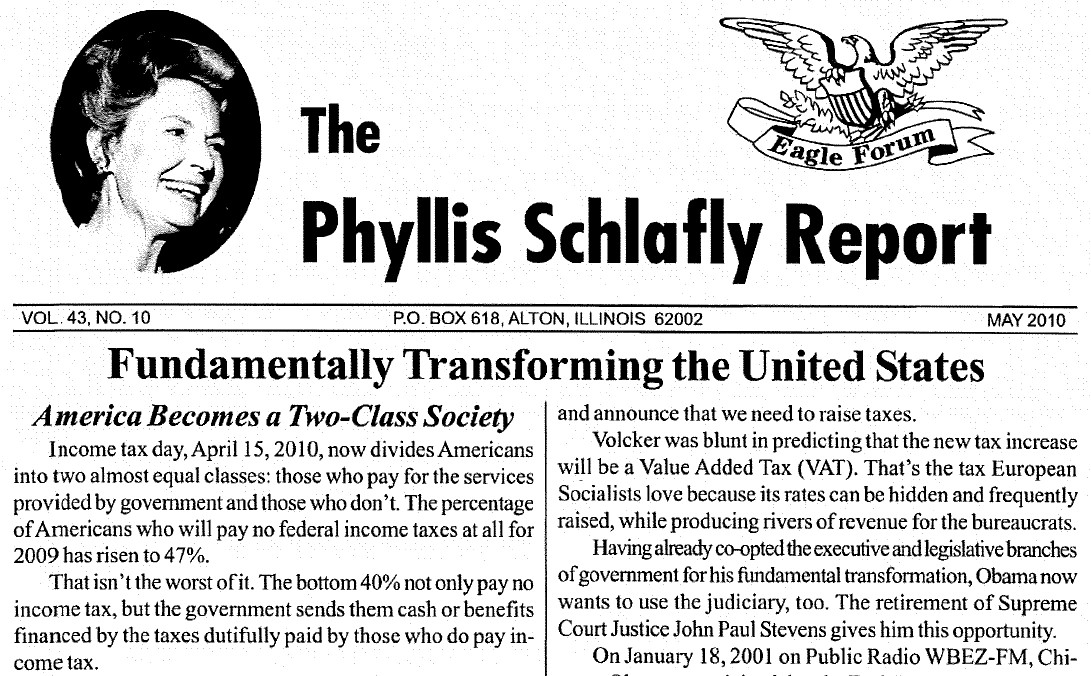 What You Need to Know is the Qatar-Europe NGO scandal continues! These global schemes with millions of dollars flowing through non-government … END_OF_DOCUMENT_TOKEN_TO_BE_REPLACED

As the midterm elections fast approach, Democrats have lost a key demographic that they relied on in 2020: college-educated men. The biggest … END_OF_DOCUMENT_TOKEN_TO_BE_REPLACED

What You Need to Know is that Trump’s taxes are a nothingburger. The House has released the documents! The long-awaited Trump tax returns are out, and … END_OF_DOCUMENT_TOKEN_TO_BE_REPLACED

What You Need to Know is it’s Election Day! The media isn’t going to stop adjusting the news to report what will benefit them — Politico: Biden, Trump … END_OF_DOCUMENT_TOKEN_TO_BE_REPLACED

Phyllis Schlafly Eagles · November 4 | TikTok Trends Bash the Workplace I may not be the world’s leading expert on the latest TikTok trends, but … END_OF_DOCUMENT_TOKEN_TO_BE_REPLACED

What You Need to Know is a lesson on documents and double standards. Suddenly everyone has classified documents and everyone is spinning the stories … END_OF_DOCUMENT_TOKEN_TO_BE_REPLACED

Phyllis Schlafly Eagles · February 3 | "Woman" Is the Word of the Year The internet is a powerful tool that most of us use every day. … END_OF_DOCUMENT_TOKEN_TO_BE_REPLACED

What You Need to Know is Tucker is allowing the will of the people to be heard! When a huge block of Republicans and so-called conservatives are … END_OF_DOCUMENT_TOKEN_TO_BE_REPLACED