Sometimes the biggest problem plaguing conservatives is that we do not have the same mentality that liberals have. We see politics like a game of football. We laud the importance of “keeping our eye on the ball” so that we can score a “touchdown” in the form of electing the right people or achieving a key legislative victory through grassroots action. However, liberals do not look at things the same way. They see politics as a game of dodgeball. They keep throwing different balls over and over again with the hopes that a few will eventually reach their target. Thankfully, Phyllis Schlafly had the uncanny ability of seeing through the liberal mentality. Her ability to understand this key play in the liberal playbook was perfectly illustrated in the December 2007 Phyllis Schlafly Report, which ran under the title “Liberal Plans to Subvert the Constitution.” In it, she warned of the plethora of threats being lobbed by liberals at our liberty.

As we grow ever closer to the midterm elections in 2018, conservatives will be focused on electing real conservative candidates and maintaining Republican majorities in both chambers of Congress through electoral victories. Of course, you can bet that liberals will be doing the opposite. However, they have other plans in store to bolster their representation in Congress. Perhaps the most prevalent of these schemes is the plan to eradicate the Electoral College. The classic liberal line is that the Electoral College was put in the Constitution solely because Founding Era technology would have made an election based purely on the popular vote impossible. However, the Founding Fathers had much more in mind when they instituted the electoral system we now enjoy. First, the Electoral College provides a strong defense against widespread election fraud. With a popular election, it would be much more advantageous for someone to falsify outcomes in order to boost the turnout for a particular candidate. In the same way, the Electoral College prevents a candidate from demanding a recount in key jurisdictions in order to drum up a few thousand more votes in each to change the outcome of a close election. We would very quickly start to see the agony of Florida 2000 in every state in every election. Liberals do not care about that because they know the abolishment of the Electoral College would take power away from small and rural states while concentrating the power to elect the president in just a few big cities.

The next liberal attack on the Constitution comes in the form of statehood for Washington, D.C. Democrats know that D.C. will always vote for Democrats, which is why they are so strongly in favor of it. The fact of the matter is that the Founding Fathers very wisely made Washington, D.C. a special district free of state politics for the sake of effective national government. The American people know this, which is why they have such a strong opinion against the idea of D.C. statehood. As the December 2007 Phyllis Schlafly Report pointed out, the 1985 “D.C. Representation Amendment” was decisively defeated by thirty-four of the fifty states. Of course, the Democrats do not really care what the American people think. They just want to have more leverage in Congress. They would do well to heed Phyllis Schlafly when she said that, “D.C. is not a state and not a Congressional district, and it should not have voting power in Congress.”

If the Democrats cannot get more voting power from Washington, D.C., they will gladly head south to give representation to a place where residents do not even want representation. Puerto Rico has been subjected to five referenda on whether they want statehood or commonwealth status. The only one of the five in which statehood gained the majority vote was the most recent referendum in which those favoring commonwealth status boycotted, causing voter turnout to plummet. Of course, it is no wonder that Puerto Ricans do not want statehood since their commonwealth status exempts them from federal income tax. Puerto Rican statehood would be a bad deal for the rest of America because most residents of the commonwealth do not speak English, which would cause a permanent rift between it and the rest of the states. Furthermore, the average income in Puerto Rico is lower than any state in the Union at around $20,000 compared to $50,000 nationwide. This would create a massive economic gap that the rest of us would have to bridge. Despite Puerto Rican statehood being a bad deal all the way around, Democrats would rather have more votes in Congress and shove statehood down the throat of an unwilling people.

It is easy to see how Democrats cast their nets far and wide in search of any political advantage. They are willing to throw just about anyone or anything under the bus in order to win the political game. As we draw closer to the 2018 midterm elections, let’s not be blinded by conservative tunnel vision. Just as Phyllis was, we must be alert to the liberal attacks coming from all sides. Armed with the facts in such resources as the December 2007 Phyllis Schlafly Report, we can win a better future for our nation, one governed by the same Constitution that has guided our people for centuries.

To view the December 2007 Phyllis Schlafly Report in its entirety, please click on the image below. 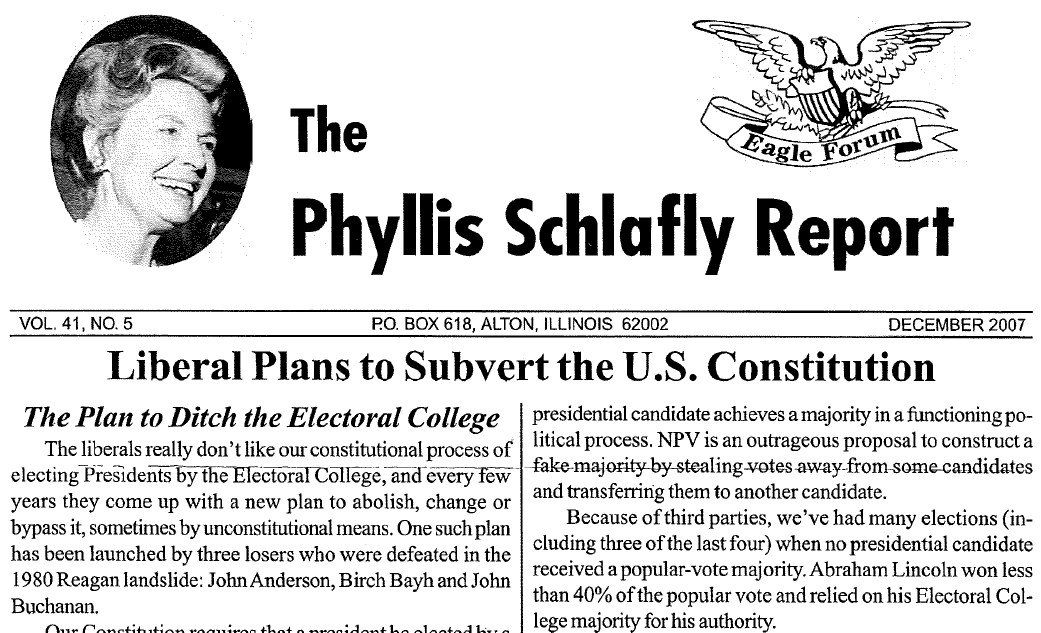 What You Need to Know about Priorities & America First. Phyllis Schlafly would give awards to significant people in her life. On these awards … END_OF_DOCUMENT_TOKEN_TO_BE_REPLACED