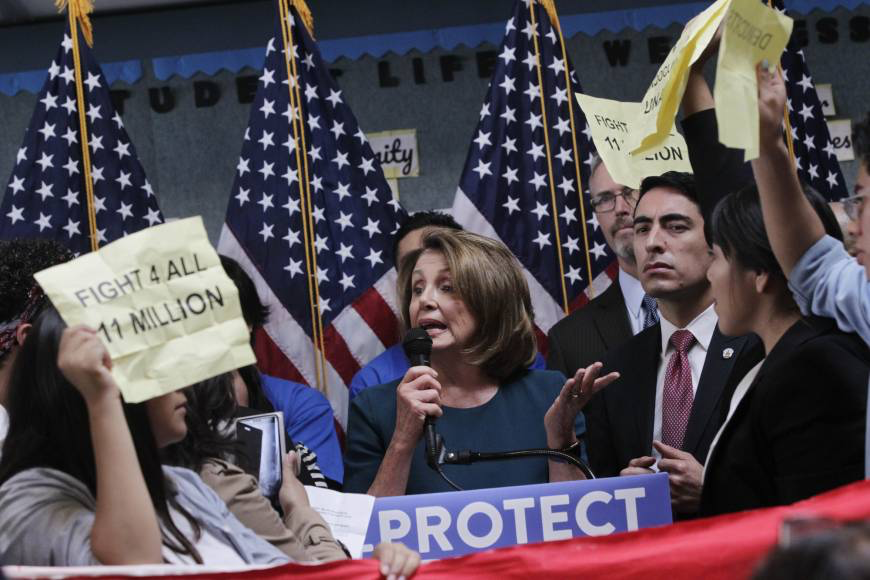 When the Democratic minority leaders of the Senate and House emerged from the White House last week, “Chuck and Nancy” claimed that President Trump had agreed to a deal that would protect so-called Dreamers from deportation. The media spin implied that Trump has a soft spot for the illegal aliens who, we’re told, were brought to our country as children through no fault of their own.

But in fact no deal was reached, as the White House soon clarified. For starters, any deal for Dreamers would require inclusion of real border security provisions to which the Democrats have never been willing to agree.

Trump later told reporters that “We’re not looking at citizenship” for Dreamers, and on Twitter he insisted that “CHAIN MIGRATION cannot be allowed to be part of any legislation on Immigration!” (Chain migration and a path to citizenship were included in previous versions of the Dream Act.)

The Dreamers are not children, as globalist opponents of border security pretend. Often those in favor of open borders can be heard referring to Dreamers as “kids” when they are typically adults in their 20s, or even older. As Trump has explained, “people think in terms of children but they’re really young adults.”

Back home in San Francisco during this week’s Congressional recess, Nancy Pelosi held a press conference at which she intended to introduce a carefully selected group of sympathetic Dreamers. Much to her dismay, she was confronted with a mob of 60 angry aliens who feared they would not qualify for the Dreamer deal with Trump.

“You’re not helping the cause,” Pelosi pleaded pathetically to the mob of “undocumented youth” who shouted her down. “Just stop it now!” Pelosi declared to the liberal protesters, who can never be appeased.

In the age of Trump, Pelosi knows that any hope of a deal depends on persuading the public that a handful of sympathetic young people are typical of the millions of illegal immigrants.

“All of us or none of us,” the rioters chanted for nearly an hour, as they waved signs demanding that Pelosi “FIGHT 4 ALL 11 MILLION.” It was a good illustration of the entitlement mentality of illegal immigrants who think they have a right to defy our laws.

The mob scene in San Francisco should have been enough to discredit any DACA deal, but even worse was what happened the same day at the federal courthouse a few blocks away from where Pelosi was prevented from speaking. That’s where the famous leftwing Harvard Law School professor, Laurence Tribe, filed a massive lawsuit against President Trump, claiming that he had no right to phase out the DACA program.

When DACA was announced in 2010 by executive action, Barack Obama insisted that it was not amnesty but merely a two-year reprieve and work permit with no guarantee of renewal. Obama’s unilateral executive action had no legitimate continuing legal authority, but Tribe’s lawsuit claims that it is somehow unconstitutional for Trump to discontinue the program.

There are four other lawsuits filed against Trump over DACA. A growing pattern among the opponents of Trump and the agenda on which the American people elected him is to file a lawsuit in a district court located within a Court of Appeals that consists overwhelmingly of Democratic-appointed judges, and the Ninth, Fourth, Second, and D.C. Circuits do.

That strategy generally ensures a ruling against President Trump at both the district and appellate court levels. This game by the Left has continued even though the U.S. Supreme Court has repeatedly slapped down and reversed the liberal lower court rulings, and held in favor of Trump, often unanimously.

Anti-Trumpers are even filing numerous briefs challenging President Trump’s pardon of Sheriff Joe Arpaio. The power of a president to pardon has traditionally been fully supported and even promoted by the political Left, and was used flagrantly by Presidents Obama and Clinton.

If that were not enough, there are multiple lawsuits challenging the prudent action by Attorney General Jeff Sessions to withhold a small amount of federal funding from cities that defy federal law by declaring themselves to be “sanctuary cities” for illegal aliens. Even though federal power is at its peak in how it spends money, a federal district court in Chicago just last Friday issued an extraordinary nationwide preliminary injunction blocking the Trump Administration from implementing its plan to withhold federal taxpayer dollars from sanctuary cities.

The will of the American people is to protect our borders and to deport illegal aliens who should not be here. Crime and the burdens on entitlement programs are immense and Trump should not be blocked by the courts from taking action to defend our sovereignty.

What You Need To Know about the 2 vaccine mandates. Andrea Kaye, guest host of the #ProAmericaReport, explains how SCOTUS is adding another day to … END_OF_DOCUMENT_TOKEN_TO_BE_REPLACED

What You Need To Know is January 6th has been politicized. Andrea Kaye, guest host of the #ProAmericaReport, talks about January 6th as we go into the … END_OF_DOCUMENT_TOKEN_TO_BE_REPLACED

As state legislatures open their 2022 sessions, their top priority should be election integrity. Topics such as freedom from Covid tyranny, … END_OF_DOCUMENT_TOKEN_TO_BE_REPLACED

If the education establishment wants to know why public schools don't get much respect from our citizenry, they need look no further … END_OF_DOCUMENT_TOKEN_TO_BE_REPLACED

Robert Strange McNamara belongs on the daytime soap operas. Better yet, his histrionics belong on Donahue or Geraldo or Sally Jesse Raphael. We are … END_OF_DOCUMENT_TOKEN_TO_BE_REPLACED

What You Need to Know about the Drums of War. The drums of war are being pounded by media and Biden - don't fall for it! More and more American … END_OF_DOCUMENT_TOKEN_TO_BE_REPLACED