The extensive archive of the Phyllis Schlafly Report spanning more than fifty years provides a detailed directory of Phyllis Schlafly’s policy positions and predictions throughout decades of time. One of those predictions came in December 2003 when Phyllis Schlafly postulated that the culture war would be won by leftist activist judges unless conservatives took a stand against judicial supremacy. This dire prediction was expounded on in Phyllis’s 2004 book The Supremacists. Sure enough, these past few years have seen the family assaulted with unprecedented ferocity by unelected lawyers. Unfortunately, conservatives who ignored Phyllis still do not know how to repel the black robed assailants. Let’s take a look at the December 2003 Phyllis Schlafly Report to find out what we can do to reclaim the American family from judicial supremacists.

When the 2016 Obergefell decision legislated national gay marriage from the bench, most conservatives were paralyzed. Many even capitulated to the false notion that a Supreme Court ruling is the “law of the land.” Of course, any civics student in elementary school can tell you that only the legislative branch has the power to make laws. Nevertheless, liberals and conservatives have allowed the judicial branch to usurp unlimited power in clear violation of the U.S. Constitution. Liberals allow it because the judiciary consistently leans to the left, as the late Justice Scalia noted in his dissent on the case Lawrence v. Texas. Specifically about the issue of sodomy laws, he said that the Supreme Court’s decision “is the product of a law-profession culture, that has largely signed on to the so-called homosexual agenda.” Scalia definitively stated that “the Court has taken sides in the culture war.” However, conservatives are equally complacent in bowing down to the judiciary because they simply do not know how to fight.

Of course, rulings like the Obergefell decision do not always pop up out of nowhere. Gay activists have been trying to use the courts to impose their will on the nation because the American people would not allow the legislature to adopt such an agenda. However, not even that is where the breakdown of the American family came from. States began adopting no-fault divorce laws in the 1970s, which removed the consequences of infidelity and essentially punished faithful spouses by demoting their status of legal protection in divorce proceedings to that of unfaithful spouses. An increasing number of other pro-family regulations were repealed throughout the 1970s and early 1980s, including laws which required a husband to support his wife and laws which outlawed infidelity. It was this slow digression of morality on the state level which eventually led to the judiciary attack on the Defense of Marriage Act in 2013 and the subsequent Obergefell decision in 2016.

Knowing what brought us to this point, the question then becomes what we can do now to turn the tide. Phyllis Schlafly’s book The Supremacists listed ten different ways to curb the power of judicial supremacists. We the People are not as powerless against this threat as some would have us believe. In today’s political landscape especially, it is more important than ever to take the steps necessary to get the right judges onto the bench to begin with. However, when judicial supremacy does creep in, conservatives need to be willing to do things like legislating exceptions to court jurisdiction (limiting federal courts under Article I, Section 8,) compelling Congress to employ the power of the purse, and even pursuing impeachment against radical judges who overstep their authority.

The people should not be bamboozled into thinking that there is no recourse after a judicial opinion is given. Being ruled by a system of unelected oligarchs is incompatible with our constitutional form of government. When the American people realize the power that they truly hold as mentioned in the December 2003 Phyllis Schlafly Report, judicial supremacy and its culture-changing impact will have no chance.

To view the December 2003 Phyllis Schlafly Report in its entirety, please click on the image below. 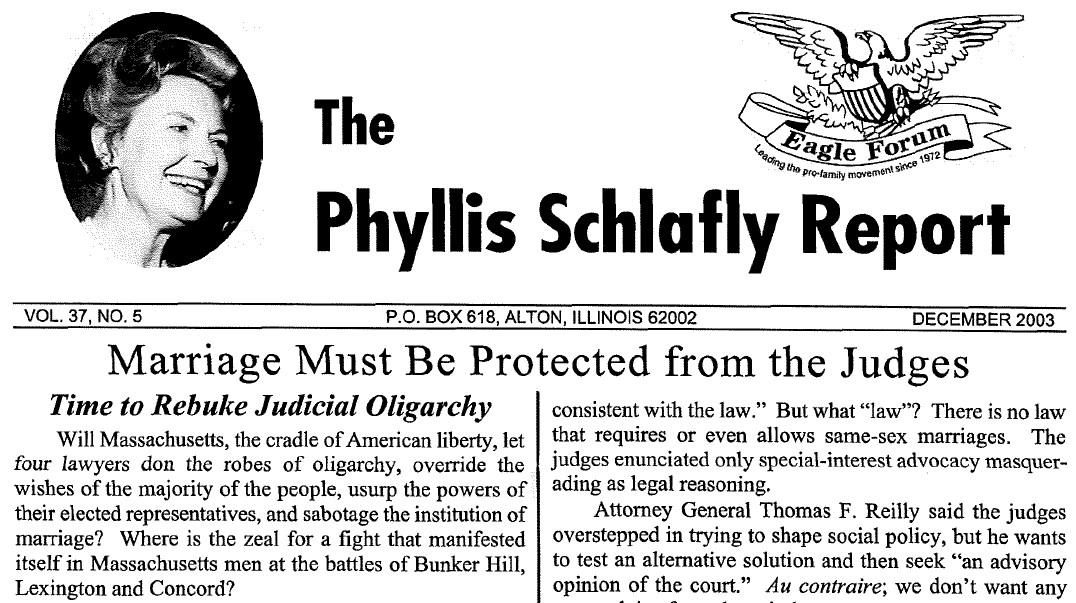 Phyllis Schlafly Eagles · October 5 | Follow the Science on Monkeypox As Americans try to put Covid behind us, another frightening virus has … END_OF_DOCUMENT_TOKEN_TO_BE_REPLACED