Liberals and Never-Trump Republicans simply can’t stand how Supreme Court nominee Brett Kavanaugh has long-agreed with Trump on core issues. Unlike Kavanaugh’s liberal rivals for nomination to the Supreme Court, he has participated in more than 3,800 cases and unflinchingly defended principles loathed by liberals. 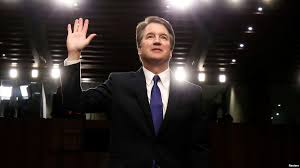 How refreshing to actually have a Supreme Court nominee who supports American sovereignty, and does not defer to international law! Writing alone, as he has often had to do on the liberal D.C. Circuit, Judge Kavanaugh has explained in 2006 that the War Powers Clause is not restricted by international law.

In another case that began in 2007, Kavanaugh dissented from a decision that gave illegal aliens the same rights as American workers in forming unions for collective bargaining.

Judge Kavanaugh strongly dissented from that pro-gun-control decision, and wrote in favor of a Second Amendment that should be defended as strongly by courts as the First Amendment is. Justice Clarence Thomas will have a strong ally on the Supreme Court for the Second Amendment once Kavanaugh is confirmed.

None of the other eight justices on the Supreme Court, including Neil Gorsuch, would join Justice Thomas’s dissent in February decrying how gun control laws are being upheld by Courts of Appeals and the Supreme Court is refusing to accept those cases to review and reverse. The stark reality is that the Supreme Court has not taken a real Second Amendment case in years, and lower courts have gotten the message that they can uphold gun control laws without fear of being reversed.

Trump’s brilliant nomination of Kavanaugh to the High Court changes that. We can expect Kavanaugh to call out his colleagues if they continue to duck Second Amendment appeals, and his strong legal reasoning should help protect that fundamental right against further erosion.

“He was definitely into video games - shooter games,” a classmate observed about the Buffalo grocery-store mass murderer. A British tabloid reported … END_OF_DOCUMENT_TOKEN_TO_BE_REPLACED

What You Need to Know is the Border is about to be totally open! In just a few days we are going to see around 18,000 illegal aliens crossing our … END_OF_DOCUMENT_TOKEN_TO_BE_REPLACED

Mike Davis is the former Chief Counsel for Nominations to the Senate Judiciary Committee under Sen. Chuck Grassley. In his current role as founder and … END_OF_DOCUMENT_TOKEN_TO_BE_REPLACED