As the battle on Obamacare continues to rage in the halls of Congress, the well of wisdom found in the Phyllis Schlafly Report can give decisive direction to critical conservatives. The July 1994 issue talks about Hillary Clinton’s botched attempt at health care “reform” that later culminated in the disaster known as Obamacare. More than political talking points and medical jargon, the Report listed off specific points that conservatives should watch out for when determining if a health bill was really viable from a conservative perspective. With so many proposed solutions on healthcare to be ruminated, we would do well to consider Phyllis’s list of fourteen liberal traps and conservative principles to watch out for in health care.

It is astounding to consider how many failed liberal arguments from the 1990s were recycled and repackaged for Obamacare twenty years later. The mainstream media of 1994 took huge leaps to praise Canada’s socialist health care system over America’s. Yet, this is clearly nothing more than a case of the grass being greener on the other side. You do not have to be a doctor, scientist, or bureaucrat to make that connection. Just look at the thousands of Canadians who stream across the border every year to receive care. According to a Canadian public policy think tank called the Fraser Institute, more than 52,000 Canadians went to the United States or other countries last year for health care that was not available to them because of Canada’s socialist health care system.

For many people who face these problems with socialistic health care in Canada and in other countries, this is a matter of life and death. British parents Chris Gard and Connie Yates know better than anyone what the end result of socialized medicine is. Their son Charlie Gard was denied treatments that could have had as much as 56% chance of being effective because the hospital saw health care as a tool of the government rather than as an individual choice. Even when Chris and Connie raised more than $1.3 million to pursue the treatments in the United States without any aid from the socialist system itself, the British government would not allow them to make health care choices for their own son.

Bureaucrats made the executive decision that expending the resources for treatment was not worth the chance of Charlie being able to live, even when physicians believed that there was a substantial chance that he could be saved. In the end, Charlie Gard was a victim of the very socialized healthcare system that liberals in the United States want to impose on us. The question then becomes very simple: When the United States is no longer a haven for free market health care, where can we go for life-saving treatments when the government refuses to serve us?

Phyllis laid it out very simply. The grass is not greener on the side of socialized medicine. The socialist model leads to higher taxes, a one-size-fits-all approach, and eventually a complete abolishment of freedom of health care choice by the individual. The term “death panels,” which refers to the idea of bureaucrats who determine whose life is worth saving and who should not receive treatment, is not something that should be shrugged off as the Left has attempted to do. Just ask Chris Gard if death panels really exist.

Health care is not some political talking point; it is a literal matter of life and death. Let’s not lose sight of these fundamental principles as conservatives move forward in the debate on health care. We need to temper our views with the common sense and clear direction of the July 1994 Phyllis Schlafly Report. The solution is not socialized medicine. The solution is ridding ourselves of the Obamacare nightmare and instituting the principles of conservatism.

To view the July 1994 Phyllis Schlafly Report in its entirety, please click on the image below. 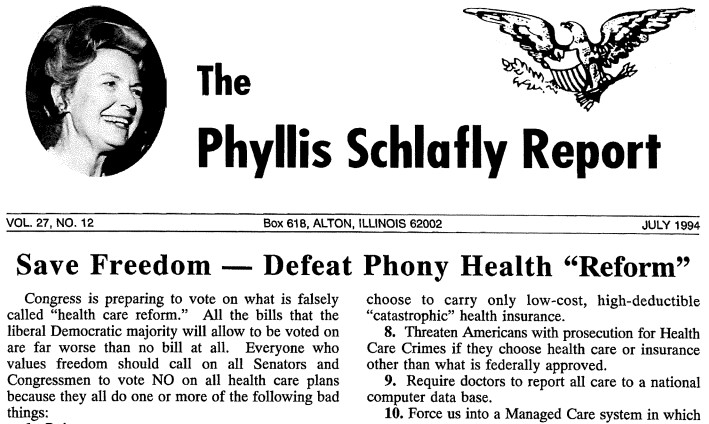 Phyllis Schlafly Eagles · April 22 | Conservatives Fall For A Con Game Some conservatives are falling for a con game and they don’t even know it. … END_OF_DOCUMENT_TOKEN_TO_BE_REPLACED

What You Need to Know is Democrats’ plan to slow down GOP investigations. David Brock (of Media Matters) released a memo detailing a group that will … END_OF_DOCUMENT_TOKEN_TO_BE_REPLACED

What You Need to Know is Fauci retires from the Covid Industrial Complex! He’s sneaking out under the cover of Thanksgiving and a no-news week. He … END_OF_DOCUMENT_TOKEN_TO_BE_REPLACED

What You Need to Know about the Red Tsunami! Turnout for the November, 8th, 2022 midterm election will be high. Be on the lookout for fraud. But we … END_OF_DOCUMENT_TOKEN_TO_BE_REPLACED

Phyllis Schlafly Eagles · December 9 | Are Supporters of America First Scrooges? It’s going to be a long, cold winter in the United States, but … END_OF_DOCUMENT_TOKEN_TO_BE_REPLACED

What You Need to Know is about the fast changing strategies of the left. They used to be able to run to judges and get their priorities through … END_OF_DOCUMENT_TOKEN_TO_BE_REPLACED