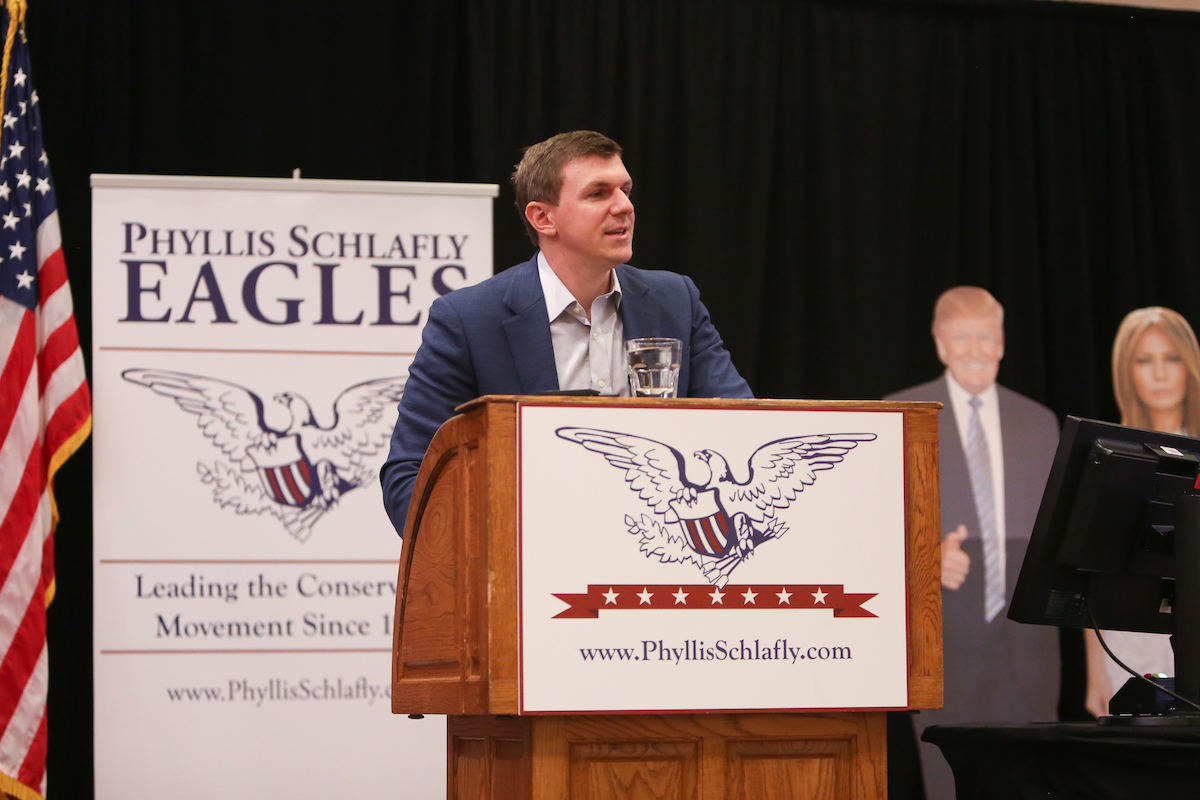 O’Keefe and Kirk are making headlines and changing the nation’s perspective on conservatism. The two shared their experiences and insight into the political and cultural battles that lie ahead. 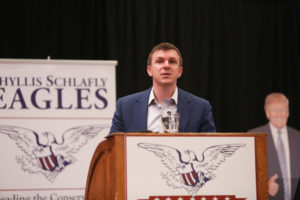 James O’Keefe teased about his soon to be released Project Veritas “Deep State Unmasked” investigation. He spoke about his in-depth undercover investigative effort in pursuit of DC’s Deep State, through interviewing and exposing members of the US. government that do not feel bound by the 2016 election results.  As O’Keefe said, “Such individuals have no use for the will of the people. They continue to pursue their own personal, political and ideological agendas, as a self-styled “resistance” seeking to bring down the Trump presidency from within.”

Watch here James O’Keefe’s remarks made at Phyllis Schlafly’s Gateway Eagle Council XLVII. O’Keefe’s project covered a time period of six months.  As O’Keefe, recounted: “We will put a face to the name of the people who had to be secretly recorded outside their federal buildings. We will be attacked by the media as unethically recording people without their permission. Undercover reporting is not unethical; however, the media believes privacy belongs to the government and therefore protects those in government who exhibit political views and actions the media agrees with.”

As O’Keefe said: “Some federal workers might even lose their jobs.”  It was announced on Wednesday, September 19, 2018, that the US Department of Justice would look into alleged “misuse of government resources to advance personal interests”, in response to a video from James O’Keefe’s Project Veritas purporting to expose Deep State federal employees.  Only time will tell whether the videos will lead to serious investigative work on behalf of the government.

James O’Keefe has lived up to his promise. Less than a week after O’Keefe teased attendees at Eagle Council to watch for his release of Project Veritas videos outing Deep State individuals, as of Friday, September 21, there have been three released.

The first video in the series, released Tuesday, September 18, showed career civil servant Stuart Karaffa of the State Department boasting of working for the Democratic Socialists of America while he’s being paid by taxpayers.  He explained his task is: “Resist everything. … Every level.”

In the second, two “Deep State” radicals confessed, “There’s a lot of talk about how we can like, resist from inside.”

In the third video, comments by Natarajan Subramanian, a Government Accountability Office worker and self-described communist, were captured by O’Keefe’s reporter.  Natarajan said: “If you’re in [an] executive branch agency you can slow-ball things to a degree, that it’s like ineffective, and maybe you get in trouble, or maybe you get fired or resign or whatever, but you slowed [Trump’s agenda] down for a certain period of time.” 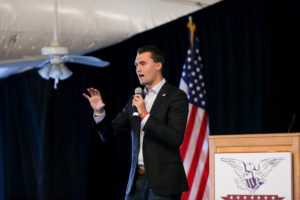 Candace Owens of Turning was scheduled to appear at Eagle Council, but she was unable to keep her commitment.  Most of you have often seen and heard Charlie Kirk speaks often on TV.  Having had his desire to enter the U.S. Military Academy at West Point rejected, Kirk decided to delay college by six months. During this period, he started something from nothing at age 18.  At age 24, Kirk saw his organization grow to over 1,000 chapters on college campuses. Only in America is this possible!

Charlie to the Gateway Eagle Council audience of being invested in a cultural war and how politics is downstream from the cultural war. Students are told America is racist, because land was stolen from the Indians to benefit the white ruling class. In visiting college campuses, students aren’t always opposed to what Charlie has to say, he told the attendees.

In many cases, students haven’t been exposed to the idea that America is a great country but were instead taught to express anger at their country.  According to Charlie, when students are asked if they are proud to be American, only 18% respond positively, whereby the number was 54% when Obama was president. While liberals in the past used to listen and then politely declare their right to disagree, this no longer exists.  A person must think a certain way because of their skin color. That a black person could ever be a conservative is perceived as a racial statement.  As such liberals succeed in controlling people by dividing them into groups.

Charlie Kirk spoke of President Trump as the first president who is being attacked for doing what he promised to do, such as dealing with China’s trade imbalance, moving our embassy to Israel, and more funding for ICE.

Kirk spoke about the great divide that exists on colleges campuses: those thankful to live in America and those who are angry about America. Colleges are teaching a generation of students how to be angry.  Many students at Harvard, Yale, and Berkley find nothing good about America.  As far as victimhood, the Left loves victims.  If you wear the badge of victimhood, you never run out of people to blame for your failure. It becomes a badge of honor, he said.

Kirk also spoke about the rise of atheism on college campuses. The Communist Manifesto is the most read book, he said. Many students tell Kirk they don’t believe in God, but, as Kirk said, “Without God, there would be no atheists.”

Kirk concluded with this statement: “The Left has taken over the public schools through the college level; if the Left get back its power, it will likewise go after home schooling.” 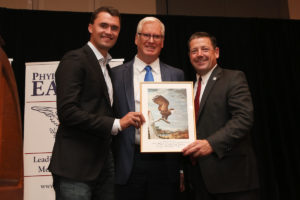 The Gateway Eagle Council event was held in what the Marriott St. Louis Airport Hotel refers to as the “Grand Pavilion”, but Eagle Council referred to it as the “Presidential Pavilion” because of the many presidential hopefuls it hosted there in 2015.

Jim Hoft, Gateway Pundit, one of the most influential conservative websites in US politics, joined Eagle Council XLVII, founded by Phyllis Schlafly in 1972, for this leading mid-America conservative conference. See here this year’s lineup of top American and European conservative leaders who provided amazing insight about issues facing this nation and in Europe.

In Part 1 Thorner spotlighted three of the five notable speakers who spoke under the heading President Trump is Winning at the first scheduled Eagle Council event on Friday, September 14: Ralph Reed, Stephen Moore, and Sam Clovis.

What You Need to Know is it’s a Time for Choosing Again — time to choose life! In the wake of the Dobbs decision, the left is sneakily … END_OF_DOCUMENT_TOKEN_TO_BE_REPLACED

For Immediate Release: June 27, 2022Contact: Ryan Hite, Communications Director Washington, D.C.: “Praying in public is not a crime, and the … END_OF_DOCUMENT_TOKEN_TO_BE_REPLACED

Phyllis Schlafly Eagles · June 3 | Bad Company on Abortion It is often said that we are only as good as the company we keep. With that in mind, … END_OF_DOCUMENT_TOKEN_TO_BE_REPLACED

What You Need to Know about the Power of Lawfare. The use of the legal system against We the People is getting more and more sophisticated. This was … END_OF_DOCUMENT_TOKEN_TO_BE_REPLACED

Phyllis Schlafly Eagles · June 20 | Who Should Pay For Student Loans? Although President Biden claims to understand the gravity of the student loan … END_OF_DOCUMENT_TOKEN_TO_BE_REPLACED

What You Need to Know about the January 6th prisoners. It seems like those who were arrested because of their involvement on Jan. 6th are being held … END_OF_DOCUMENT_TOKEN_TO_BE_REPLACED

Phyllis Schlafly Eagles · June 30 | Pro-Life Without Exceptions: Life of the Mother Enemies of the pro-life movement know that they can never win … END_OF_DOCUMENT_TOKEN_TO_BE_REPLACED

Phyllis Schlafly Eagles · June 29 | Pro-Life Without Exceptions: Health of the Mother Empty emotional appeals are the only way for pro-choicers to … END_OF_DOCUMENT_TOKEN_TO_BE_REPLACED

“I never like to take credit for anything,” Donald Trump told a hostile reporter last month. “God made the decision,” he added recently about the … END_OF_DOCUMENT_TOKEN_TO_BE_REPLACED