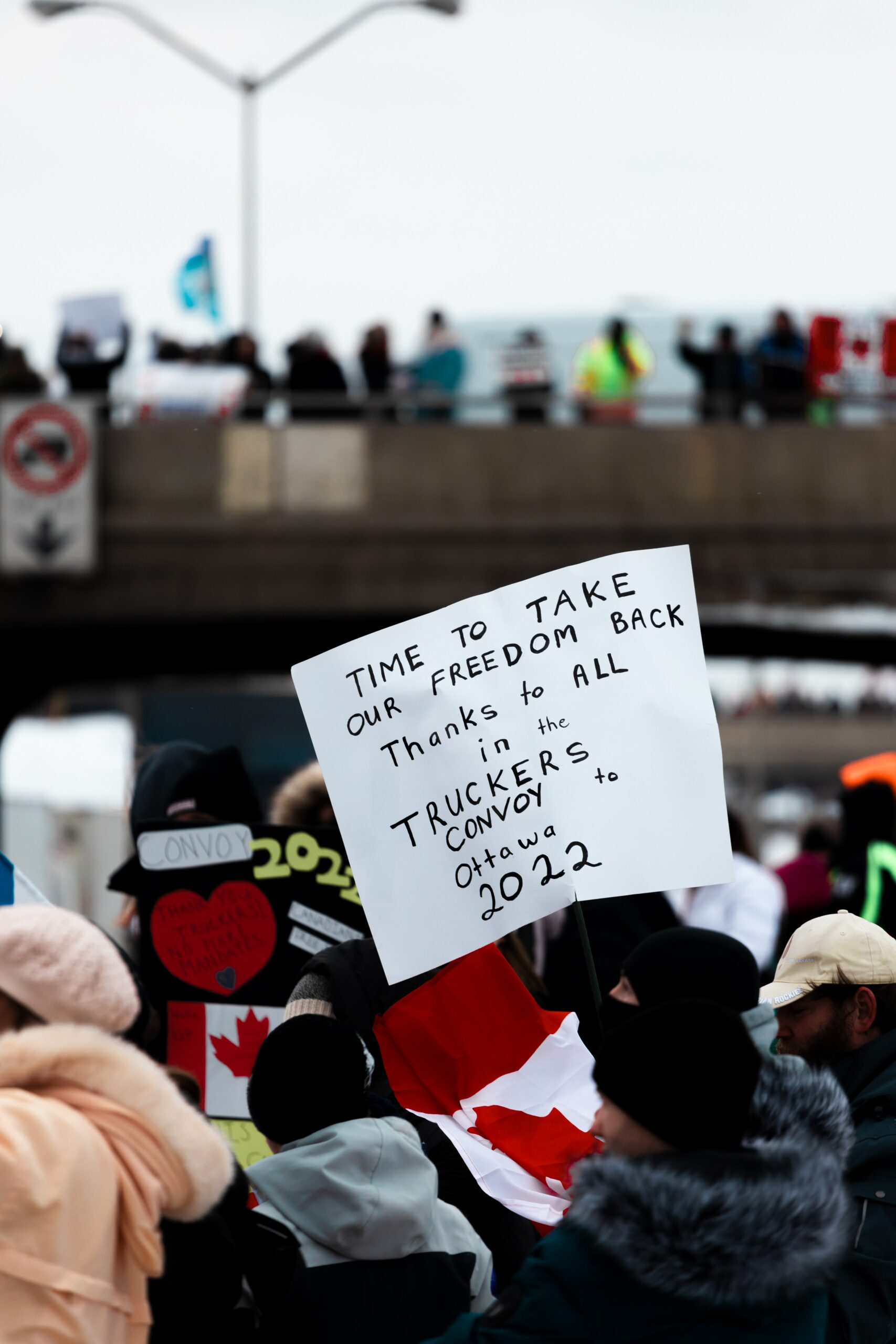 Leftwing Prime Minister Justin Trudeau, who got his job based on the name recognition of his father, has smeared fellow Canadians as perpetrating “racist, misogynistic attacks” when they oppose his policies. The truckers responded by calling out the cowardly Trudeau, who fled the capital to hide from the truckers at an undisclosed location. The independent spirit of truckers is a godsend, and their protest against Canada’s vaccine mandate is indicative of a global movement to resist Covid tyranny. After millions of dollars were donated but blocked by liberal-controlled GoFundMe, millions more were contributed to the truckers through the Christian alternative, GiveSendGo.

Truckers are the kind of salt of the earth people you don’t want to mess with, especially if you are a politician like Justin Trudeau. An activist named Wendy at a Freedom Convoy demonstration challenged the prime minister by saying, “We dare you, Trudeau, to come and speak to us to our faces.” At a press conference, a trucker commented on how the police who were ordered to make arrests were too embarrassed to look the truckers in the eye.

Despite what Trudeau claims, there is nothing “racist” or “misogynist” about opposing the vaccine mandates, which are opposed by many minorities and women, too. The latest data indicate that nearly 40% of Americans have declined to be fully vaccinated against Covid, despite all the pressure, and not without cause.

The CEO of a $100 billion life insurance company announced that deaths among working age people are up 40% over pre-pandemic levels, which is the biggest increase in mortality in the history of life insurance. Those deaths can’t be traced back to Covid, but it is very likely that locking down the entire world in such an unprecedented way had something to do with it. Some Democrat strongholds may be slowly peeling back these dangerous lockdowns, but most have not been willing to do the same for vaccine mandates. Democrats should take notice of how disastrous the lockdowns have been and end the vaccine passports being required in several American cities. We don’t need top-down mandates to overcome Covid, but we need courageous patriots if we are to overcome the Leftist mindset of tyranny.

What You Need to Know is Title 42 is about to expire! What is your preference? Do you prefer we have a secure border and decide who we let in? Or that … END_OF_DOCUMENT_TOKEN_TO_BE_REPLACED

Biden’s Plan to Buy Votes  As the midterm elections fast approach, Democrats have lost a key demographic that they relied on in 2020: … END_OF_DOCUMENT_TOKEN_TO_BE_REPLACED

Phyllis Schlafly Eagles · May 16 | The Trickle-Down Effect of Bad Policies Good news arrived in the district court of the District of Columbia, … END_OF_DOCUMENT_TOKEN_TO_BE_REPLACED

What You Need to Know is Montpelier is going Woke. Soledad O’Brien is now on the board of directors of Montpelier, James Madison’s home. She is part … END_OF_DOCUMENT_TOKEN_TO_BE_REPLACED

Phyllis Schlafly Eagles · May 5 | How Effective Is Social Justice Military Recruitment? As Covid subsides, the tyranny that exploited it continues. … END_OF_DOCUMENT_TOKEN_TO_BE_REPLACED

What You Need to Know about the politics of mask mandates! This week we saw the mask mandate lift on public transportation. Here are two headlines … END_OF_DOCUMENT_TOKEN_TO_BE_REPLACED

What You Need to Know is the Border is about to be totally open! In just a few days we are going to see around 18,000 illegal aliens crossing our … END_OF_DOCUMENT_TOKEN_TO_BE_REPLACED