By February 1978, proponents of the Equal Rights Amendment were becoming desperate. They had successfully ramrodded thirty state ratifications in the first year of the seven-year period given before ERA would expire. As other state legislatures slowed down and actually took the time to debate the issue, progress slowed and only five states ratified over the next five years. During that same period, five of the original thirty states rescinded their ratifications. As was always the case with those on the left, the feminists turned to the same old tactics to turn the tide in their favor. Phyllis Schlafly was keen enough to point out these tactics and expose them for the dirty tricks they were. As liberals start to get desperate today in light of the surge of conservatism in America, they are turning to the same tactics.

The first of the three tactics Phyllis identifies is the boycott. The feminists tried to punish states that would not ratify ERA by imposing a boycott, which Phyllis facetiously suggested should be called a “personcott” for the sake of gender neutrality. Not surprisingly, liberals are still using the same tactic, especially with regard to the issue of transgenderism. The state of California passed a bill making it illegal to use state funds for travel to states which keep men out of women’s bathrooms. The National Collegiate Athletic Association similarly attempted to ban games in North Carolina after they passed a “bathroom bill.” Phyllis Schlafly pointed out that boycotts of entire states do not address the real issue. Rather than convince people that they are right on the issue, boycotts of states only harm unrelated businesses and the people who work for them. In contrast, conservatives have successfully used boycotts to speak out against specific companies with bad policies, like the boycott of Target which accumulated 1.3 million signatures. However, when liberals try to punish entire states for a policy they do not like such as a stance against ERA, people are left thinking as Phyllis Schlafly did that “If there were any merit to ERA, its supporters would not need to resort to the tactics of tantrum and revenge.”

The second of the three tactics Phyllis identifies is changing the rules. In the case of ERA, Congress changed the rules to illegally extend the deadline by seven years in order to ensure its ratification. This unprecedented maneuver was completely contradictory to the spirit and letter of the Constitution. Unless the convention method is used, Article V of the Constitution makes no provision for Congress to stack the deck if they do not like the way the way things are going. Liberals today do the same thing with the court system. If they do not like what they Constitution says, they simply petition to have it changed by their friends in the federal judiciary. Phyllis said, “It’s just like a losing football team demanding that a fifth quarter be played in order to give them a chance to catch up. The fans on either side would not stand for such an outrageous changing of the rules, and neither will fair-minded Americans accept this similar attempt to change the rules.”

The third of the three tactics Phyllis identifies is federal funding. As last week’s article explained, feminists sought to revive their dying movement by holding a series of conferences and rallies with a five million dollar budget allotted to them by Congress. Not only did their plan to restore momentum fail miserably, but it also showed that their movement could not exist independent of federal aid. Similarly, the liberals of today fight incessantly to secure hundreds of millions of dollars for the abortion mill known as Planned Parenthood. Forty percent of Planned Parenthood’s budget comes from federal tax dollars, which is an incredible sum for a clearly biased partisan organization. We need to do more than defund Planned Parenthood. We need to make the message known that funding the liberal agenda with taxpayer dollars is now and forevermore off limits. It was a terrible waste of money with the 1977 International Women’s Year Conference and it is still a terrible waste of money today. If we want to spend money for women’s healthcare, let’s give it for real healthcare and not the killing of innocent children.

Whether it is the feminists Phyllis was battling in 1978 or the liberals we face today, there is nothing new under the sun. They are still calling for boycotts, still changing the rules, and still begging for federal funding. Phyllis Schlafly overcame these three tactics by calling them like she saw them, and doing it with a smile. In the classic Phyllis fashion, she used good strategy, clear speech, and strong facts to diffuse the three tactics. Let’s learn from her today so we can see liberal agenda items like the transgender issue, judicial supremacy, and abortion join ERA on the ash heap of history. 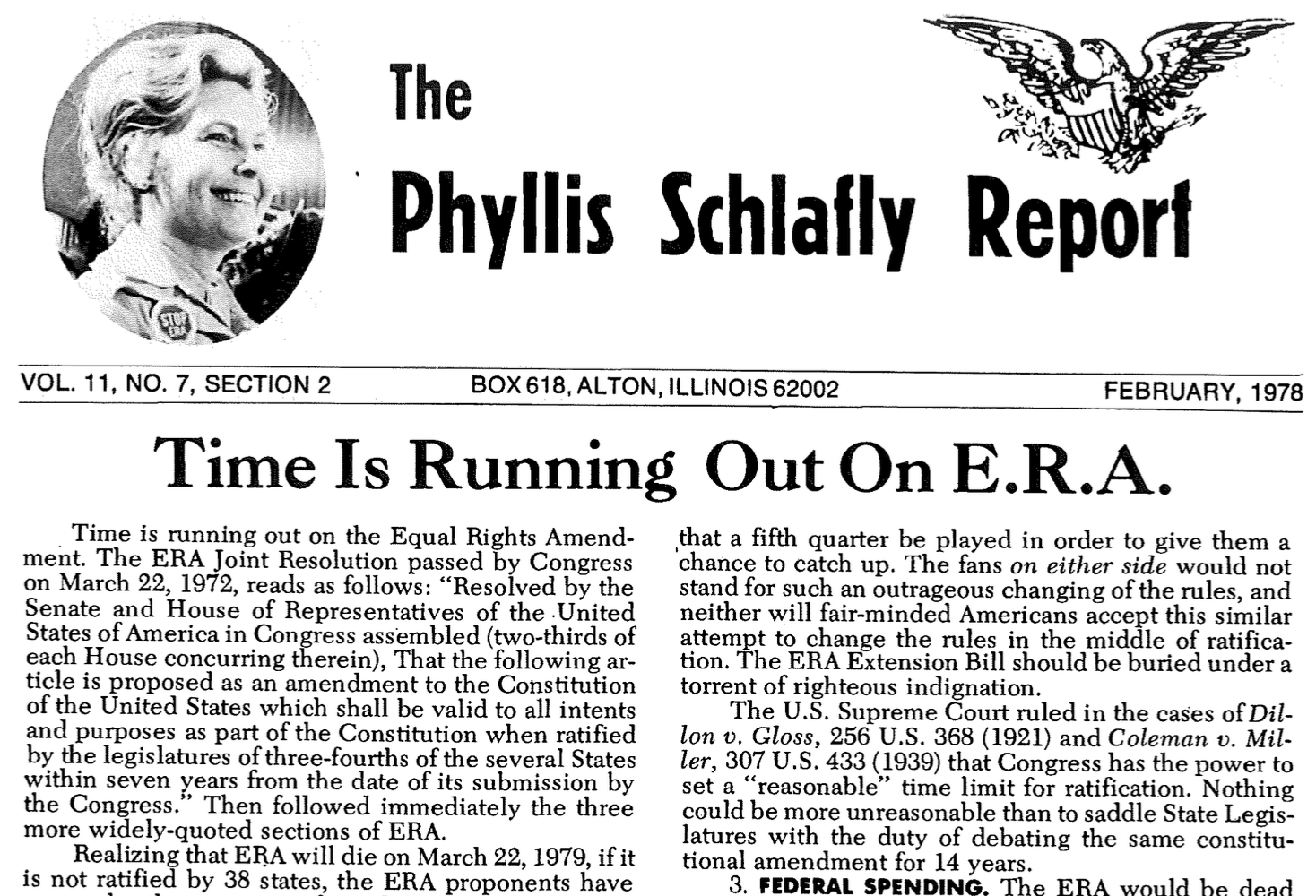 What You Need to Know is the Border is about to be totally open! In just a few days we are going to see around 18,000 illegal aliens crossing our … END_OF_DOCUMENT_TOKEN_TO_BE_REPLACED

Mike Davis is the former Chief Counsel for Nominations to the Senate Judiciary Committee under Sen. Chuck Grassley. In his current role as founder and … END_OF_DOCUMENT_TOKEN_TO_BE_REPLACED

What You Need to Know is Montpelier is going Woke. Soledad O’Brien is now on the board of directors of Montpelier, James Madison’s home. She is part … END_OF_DOCUMENT_TOKEN_TO_BE_REPLACED

Phyllis Schlafly Eagles · #WYNK: Montpelier is going Woke | May 19, 2022 #ProAmericaReport The following is a transcript from the Pro America … END_OF_DOCUMENT_TOKEN_TO_BE_REPLACED

What You Need to Know is our election system is broken! It's failing and We the People have no confidence in the system. Pennsylvania has shown again … END_OF_DOCUMENT_TOKEN_TO_BE_REPLACED

Phyllis Schlafly Eagles · May 19 | Boys and Girls and Grades? ** Previously recorded by Phyllis Schlafly // May 2015 ** Colleges claim they … END_OF_DOCUMENT_TOKEN_TO_BE_REPLACED

What You Need to Know Feminists don’t what they are doing! They are about to make another marketing error by utilizing all the wrong imagery and … END_OF_DOCUMENT_TOKEN_TO_BE_REPLACED

“He was definitely into video games - shooter games,” a classmate observed about the Buffalo grocery-store mass murderer. A British tabloid reported … END_OF_DOCUMENT_TOKEN_TO_BE_REPLACED

What You Need to Know how to drain the swamp in 2022! Kathy Barnette is running for Senate in Pennsylvania, and her story is absolutely incredible. … END_OF_DOCUMENT_TOKEN_TO_BE_REPLACED