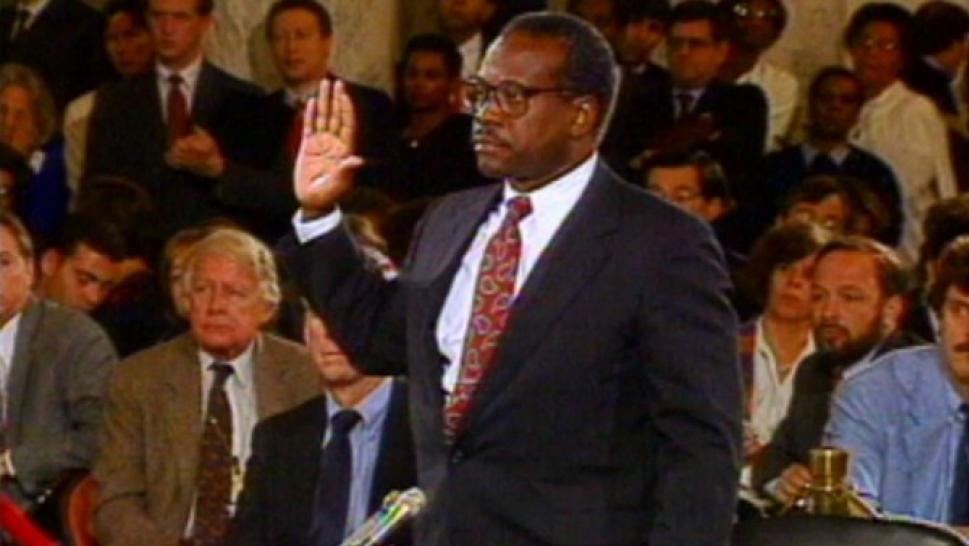 Most people would get over a defeat that occurred nearly 25 years ago, but feminists hold grudges forever. They continue to rage against Justice Clarence Thomas’s routing of them at his 1991 confirmation hearings, where he beat liberals at their own game, surviving a media ambush that would have destroyed any mere mortal.

A new movie called “Confirmation” tells the story of the Clarence Thomas Senate hearings from a distorted liberal perspective. Senator Alan Simpson, a key participant in the hearings, described the movie as “seriously distorted” based on his review of the script, and former White House lawyer Mark Paoletta said “it’s a dishonest film. … It’s a propaganda piece for Anita Hill and for Hillary Clinton’s run for the White House.”

Anita Hill is now a professor of women’s studies and gender equality who is helping to promote the film to “a whole generation of people who weren’t even born then.” Hill told Time magazine that “we need a female President … to address questions of equality — why we need equal pay or access to child care and family leave.”

The real Clarence Thomas confirmation hearings riveted the entire Nation in a manner not seen since the Watergate hearings nearly two decades earlier. It was a stunning triumph of justice, and a victory for the pro-life movement at a time when there were few pro-life senators.

As a black conservative, Clarence Thomas is someone liberals want to pretend does not exist. So when George H.W. Bush appointed Thomas to fill the seat vacated by another African-American, the liberal Thurgood Marshall, Democrats went ballistic in trying to stop the confirmation.

Thomas had already been confirmed by the Democratic-controlled Senate to serve on the D.C. Circuit, the same court on which President Obama’s nominee Merrick Garland now sits, so his opponents couldn’t claim that he lacked qualifications to be a judge. His temperament and legal work were impeccable, and he had a stellar record in running the Equal Employment Opportunity Commission.

Thomas survived intense grilling of him by the Senate Judiciary Committee required particularly of conservative nominees. Democrats were unable to poke a hole in Thomas’s answers to tough questions on the issue of abortion and other topics in exhaustive hearings that lasted nearly a month.

When the Senate Judiciary Committee deadlocked in a 7-7 tie and sent the nomination to the Senate floor, liberals started to get desperate, as Thomas’s confirmation prospects appeared headed towards inevitable passage. But because Thomas was a black conservative, his enemies were lying in wait for one of the most brutal political ambushes of all time.

One day before the scheduled vote by the full Senate, the media publicized outrageous allegations of a sexually offensive nature to smear Thomas and try to cause senators to vote against him. Under Senate rules, the scheduled vote could not be postponed except on the unanimous consent of all senators.

Democrats thought they had won, because dozens of senators opposed Thomas and thus were not expected to agree to a postponement of the vote. Amid the scandalous allegations of sexual harassment, senators appeared likely to vote down the confirmation of Thomas.

But there is honor even among thieves, and it was too much for even the Democrats to allow allegations alone, without a fair hearing, to destroy a man. The Senate unanimously agreed to adjourn the vote and schedule a second round of hearings at which the feminists were sure they could humiliate Thomas and destroy him.

But instead of meekly accepting his role in that psychodrama, Clarence Thomas came out swinging during his dramatic appearance at the hearings, calling the proceeding “a high-tech lynching for uppity Blacks,” “a circus,” and “a national disgrace.” Liberals stacked the audience in the hearing room, but Thomas had many supporters cheering him on as he walked the otherwise lonely Senate corridors.

Some clever researchers noticed that some of the comments Thomas allegedly made had an uncanny resemblance to dialog in the book The Exorcist, which became the top-grossing movie of all-time in the 1970s. But Thomas had never read that book, creating doubt as to whether he had ever made the comments as alleged.

Thomas showed the kind of fight that we sorely need from Republican politicians today. He inspired a generation of conservatives not to back down when even the most inhumane ambush by liberals is instigated, and not to be cowered by the liberal media either.

Thomas was confirmed by a vote of 52-48, and for nearly a quarter-century has proven to be the finest Justice currently serving on the Supreme Court. The next president should appoint someone like Clarence Thomas to fill the vacancy created by the untimely death of Justice Antonin Scalia.

“Primaried” has become a popular term for dealing with disappointment by entrenched incumbents in both political parties. It means an attempt to … END_OF_DOCUMENT_TOKEN_TO_BE_REPLACED

Phyllis Schlafly Eagles · June 25 | In Defense of Due Process Regardless of where you stand on the verdict in the Derek Chauvin murder trial, I … END_OF_DOCUMENT_TOKEN_TO_BE_REPLACED

What You Need to Know is President Joe Biden’s trip to Europe. Does it matter that he’s been stumbling and fumbling during this trip? Should you be … END_OF_DOCUMENT_TOKEN_TO_BE_REPLACED

For Immediate Release: July 23, 2021Contact: Ryan Hite, Communications Director Washington, D.C.: "Thanks to CNN, I can end your week with a … END_OF_DOCUMENT_TOKEN_TO_BE_REPLACED

What You Need to Know is Mississippi leading the nation to protect life! They are saying Roe and Casey are not good and should be reversed … END_OF_DOCUMENT_TOKEN_TO_BE_REPLACED