Tax policy and social security might not have the same draw to Americans that other issues have. When the “social” issues come up, such as abortion and marriage, many conservatives are much more quick to voice their opinions. Likewise, many Americans have realized how immigration has a broad impact on their lives, so they have become more outspoken about that issue as well. However, Americans should realize that even the fiscal issues of tax policy and social security can have a fundamental impact on the American family and the American way of life. Phyllis Schlafly understood this important fact when she wrote the June 1979 Phyllis Schlafly Report titled “Changing Social Security to Hurt the Homemaker.” In this insightful article, she explained and exposed another feminist plot to exterminate the full-time homemaker from American normalcy.

In June of 1979, the since-defunct Department of Housing, Education, and Welfare (HEW) released a 323-page document called “Social Security and the Changing Roles of Men and Women” in which they called for a change in the Social Security system to punish homemakers for being homemakers. In it, they proposed three different plans, all of which would force single-income families to pay more taxes to the tune of $1,000 annually during their working years or receive up to $100 less per month when drawing social security. By today’s currency rate, these changes would be substantial. By the currency rate in 1979, these changes would have been colossal. The Consumer Price Index states that a $100 loss of income per month in 1979 would be equivalent to $327 in 2015. The HEW plan would have forced many homemakers to take on employment outside the home simply to avoid the added taxes.

One does not have to think hard to discern why the federal bureaucracy would be eager to come up with this idea. It would mean more tax dollars for them. The real question is how feminists felt they could convince women that this proposal was in their best interest when it clearly was not. To win favor for their side, feminists said that women should be earning social security benefits “in their own right” without dependence on men. They painted this proposal as an opportunity for women to leave their homes and do something supposedly more fulfilling. Women who did not want to do this, of course, would have no opportunity for dissent. This is another classic example of feminists trying to box all women into their vision of what a woman should be. No woman should be forced to pay a “dignity tax” for doing work that feminists consider to be less dignified.

Above all else, this attack on homemakers unmasks the true intent of feminists. Despite what they claim, the radical feminists of the 1970s were never in favor of helping women or giving women new opportunities and choices. This HEW report called for families to be taxed in order to control women’s choices. No woman would benefit from the proposed changes. In fact, no one but government bureaucrats would benefit from the changes at all. There was no call for anyone to receive more benefits or pay less taxes. This was a pure and simple money-grab with the intent of putting the traditional single-income family out of business for good. Feminists have no desire to empower women who have made the personal choice to take on the highly dignified role of full-time homemaker.

By now, you have probably come to the conclusion that feminists have an anti-woman agenda, but there is still another takeaway from the June 1979 Phyllis Schlafly Report. Like Phyllis Schlafly, we should not discount any national political issue as being irrelevant to the American family. From national defense to immigration to tax policy, everything has an impact on the family. That is why Phyllis took on so many tough issues. She was a successful defender of the family on every front. While we should be careful to pick our battles, conservatives should not forget that the war for the family is being fought on multiple fronts. As Phyllis taught us with the June 1979 Phyllis Schlafly Report, let’s remain vigilant and ready to rebuff attacks on our values no matter what form they take on.

To view the June 1979 Phyllis Schlafly Report in its entirety, please click on the image below. 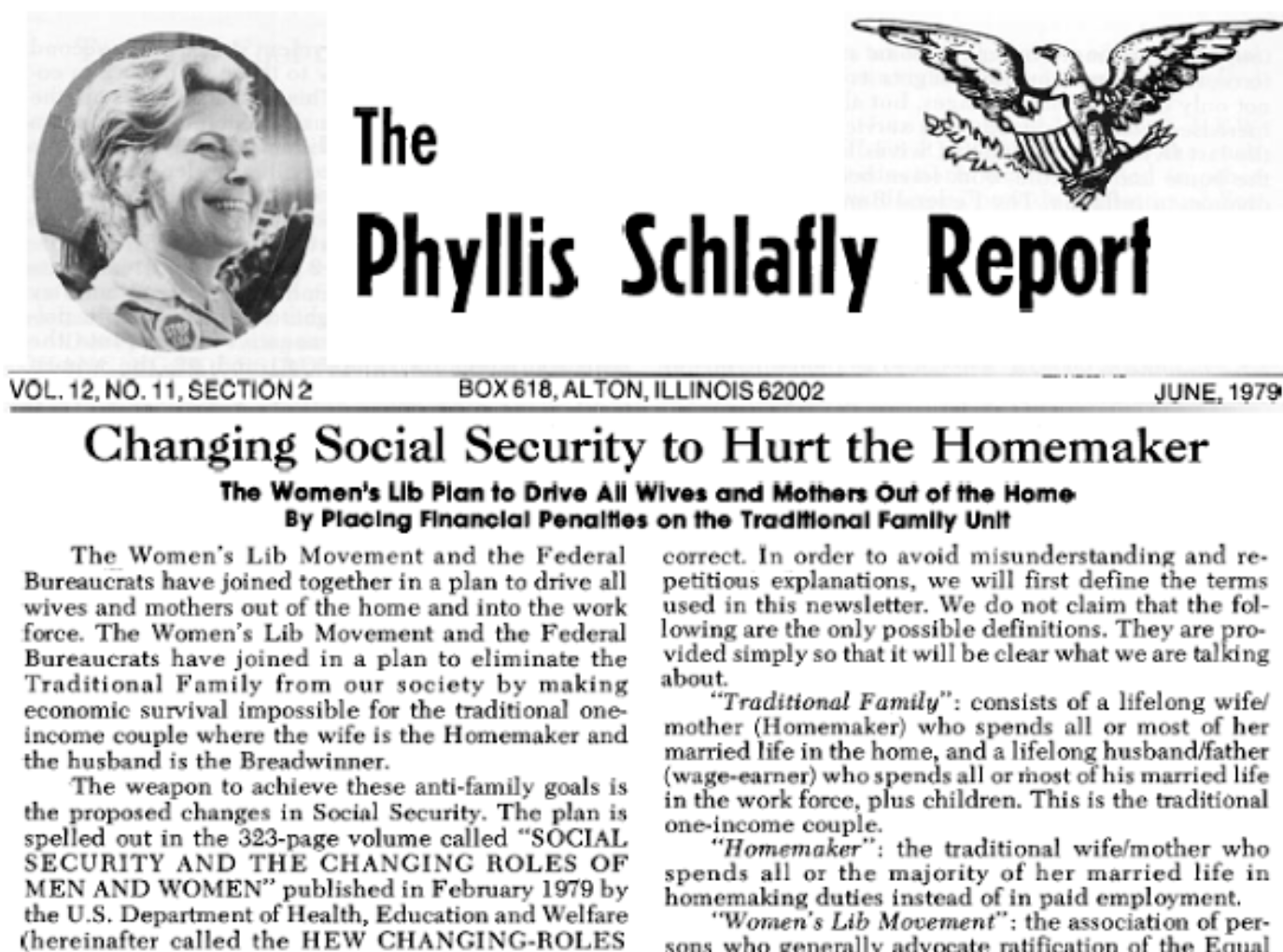 As the midterm elections fast approach, Democrats have lost a key demographic that they relied on in 2020: college-educated men. The biggest … END_OF_DOCUMENT_TOKEN_TO_BE_REPLACED

What You Need to Know is the Media and Democrats are spinning! Coverage up to the November elections will tell us it's close even though it's not. See … END_OF_DOCUMENT_TOKEN_TO_BE_REPLACED

Phyllis Schlafly Eagles · #WYNK: It's 1894 In 2022 | September 30, 2022 #ProAmericaReport The following is a transcript from the Pro America … END_OF_DOCUMENT_TOKEN_TO_BE_REPLACED

What You Need to Know is the comparison from 1894 to 2022. We are in a similar situation as in 1894. They were in a recession back then. There was a … END_OF_DOCUMENT_TOKEN_TO_BE_REPLACED

What You Need to Know is Ray Epps was in on it! Who is Ray Epps? Congressman Jamie Raskin gave us the answer after the prompting by Congressman Thomas … END_OF_DOCUMENT_TOKEN_TO_BE_REPLACED

Phyllis Schlafly Eagles · August 31 | Men and Abortion Among the many good things to come out of the Dobbs decision by the Supreme Court, the … END_OF_DOCUMENT_TOKEN_TO_BE_REPLACED

Phyllis Schlafly Eagles · #WYNK: Out of Control U.S. Spending & Debt | September 21, 2022 #ProAmericaReport The following is a transcript from … END_OF_DOCUMENT_TOKEN_TO_BE_REPLACED

Phyllis Schlafly Eagles · October 5 | Follow the Science on Monkeypox As Americans try to put Covid behind us, another frightening virus has … END_OF_DOCUMENT_TOKEN_TO_BE_REPLACED