Washington, D.C.:  Early this morning, the leadership of Phyllis Schlafly Eagles sent a letter to GOP Leader Kevin McCarthy expressing support for Steve King and dismay over leadership’s decision to take action against him. The letter was signed by Chairman Helen Marie Taylor, President Ed Martin, and Treasurer John Schlafly.

“We know all too well that the fake news looks for any chink in the defenses of conservatives,” said Ed Martin, president of Phyllis Schlafly Eagles. “Steve King is a strong conservative advocate who is often willing to take up the fight others aren’t. We cannot let the left successfully use an out-of-context remark to paint a good man as something he is not. And we cannot allow liberals to use the typical playbook of scaring GOP leadership into ‘distancing’ themselves from solid conservatives who add only good to the policy process.

“What should deserve our attention is demanding that Nancy Pelosi come clean on her cover-up of the sexual harassment epidemic and the $17 million slush fund. Republican leadership should pursue this gross misconduct and misuse of Congressional funds. Persecuting Steve King is a grave mistake and a sign of weakness. We are calling on Leader McCarthy to change course!”

You may read the letter in full here or by clicking on the image below. 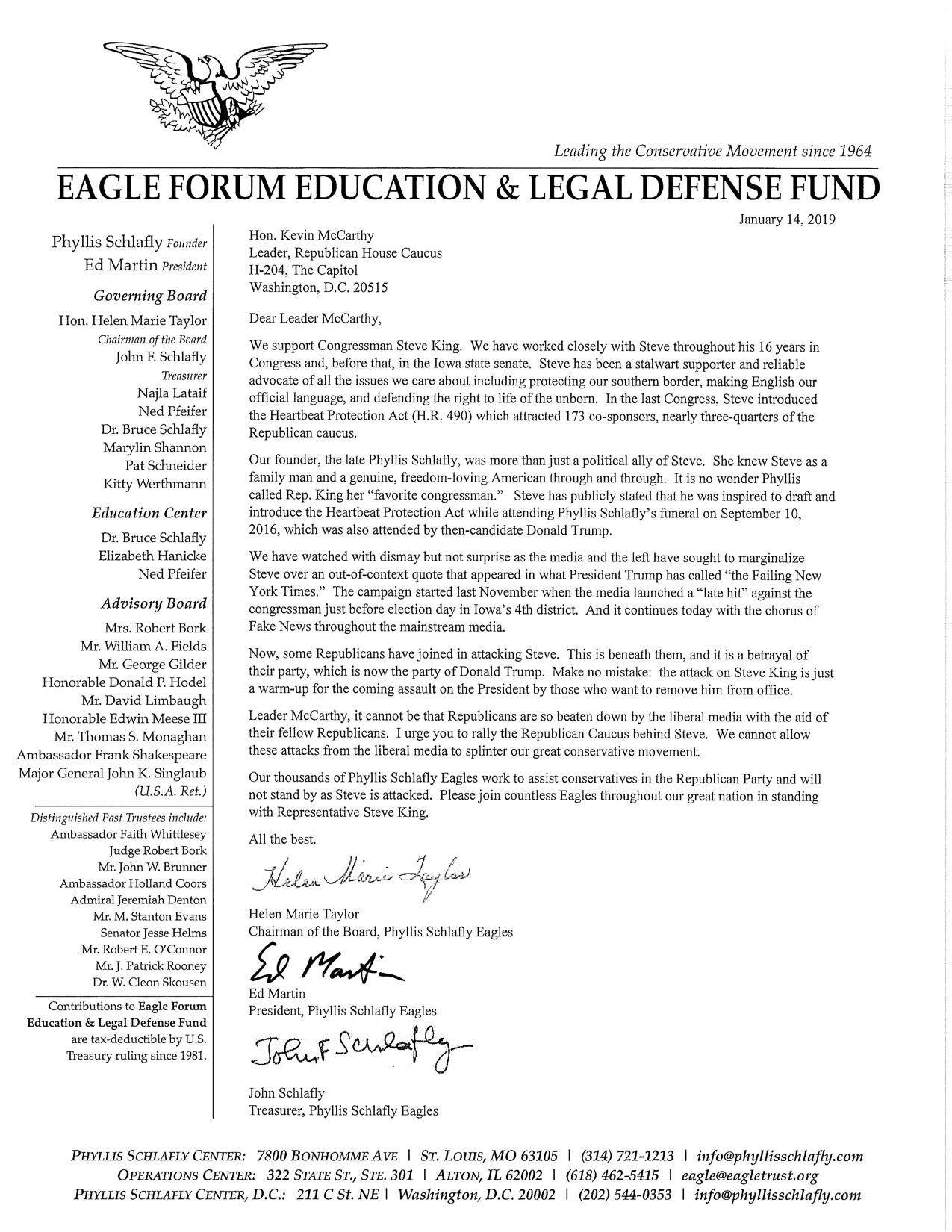 Phyllis Schlafly Eagles · May 23 | Leftism Weakens America Thanks in large part to the culture of the mainstream media, many people have tunnel … END_OF_DOCUMENT_TOKEN_TO_BE_REPLACED

Phyllis Schlafly Eagles · #WYNK: Montpelier is going Woke | May 19, 2022 #ProAmericaReport The following is a transcript from the Pro America … END_OF_DOCUMENT_TOKEN_TO_BE_REPLACED

Phyllis Schlafly Eagles · April 29 | When Will We Cancel Darwin? For those of you who haven’t heard, cancel culture is the latest trend among … END_OF_DOCUMENT_TOKEN_TO_BE_REPLACED