Not even two days in to the new Congress, and Nancy Pelosi’s Democratic House leaders were having to chastise and correct their own incoming freshmen. The new wave of socialists, eager to please their base, found themselves in hot water with their own party after mouthing off against the President as though their election battles were still in full swing. 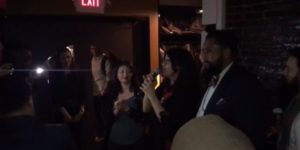 In reality, Tlaib chose to refer to Trump not as “him”, but as an obscene name that would draw a blush from even the saltiest sailor.

In particular trouble was Michigan Representative Rashida Tlaib. At a party thrown by the infamous left-wing site MoveOn.org, Tlaib, who was sworn in to office just hours earlier, used her energetic moment at the microphone to yell about President Trump, “We’re gonna impeach [him]!” Sort of… In reality, Tlaib chose to refer to Trump not as “him”, but as an obscene name that would draw a blush from even the saltiest sailor. Of course, the liberal room erupted in cheers. But cheers were not to be found in newly-minted Democratic House the next day.

Tlaib received a strong rebuke from many of her colleagues, including House Judiciary Chairman Jerrod Nadler (D-NY) and even the Speaker herself. “That is not the position of the House Democratic caucus,” Pelosi said of Tlaib’s comments. But more than just her profane choice of words, House Democrats seemed to take issue with her push for impeachment. Democratic leadership was quick to distance their agenda from impeaching Trump, and they wanted to make Tlaib an example to the other incoming socialists.

As the incoming Congress ramps up and the 2020 Presidential field starts to stretch its legs, a Civil War is very quickly brewing in the Democratic Party. The old guard, the establishment – who love their power and money – are finding a new enemy in the socialist dreamers. Not in a generation or more has a faction caused such divide in the Democrat Party as the potential we see now.

Liberals are finally meeting in full force the monster that they created in these so-called Democratic Socialists. And apparently before they come for Trump in 2020, the new-left has time to turn on their masters and cause trouble for the Democratic Party.

What You Need to Know about the January 6th prisoners. It seems like those who were arrested because of their involvement on Jan. 6th are being held … END_OF_DOCUMENT_TOKEN_TO_BE_REPLACED

“I never like to take credit for anything,” Donald Trump told a hostile reporter last month. “God made the decision,” he added recently about the … END_OF_DOCUMENT_TOKEN_TO_BE_REPLACED

What You Need to Know is Biden is marching toward America Last. Even as our continue to get entangled in NATO and their picking a fight with Putin. … END_OF_DOCUMENT_TOKEN_TO_BE_REPLACED