Delaying the Kavanaugh Senate vote in October did not help anyone except those smearing the good man who now sits on the Supreme Court.  Senate Majority Leader Mitch McConnell promised that Kavanaugh would be confirmed, and he was, but his strategy may have kicked away Democrats who might have supported the nominee.  By giving an unnecessary platform to Kavanaugh’s accusers, McConnell provided political cover for every Democrat in the chamber facing tough races at home. Also, delays like that simply facilitates more false accusations and future precedent to continue this kind of character assisination. 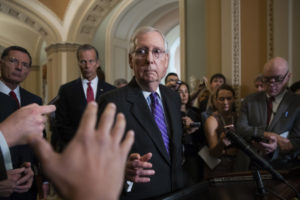 It’s high-time that Republicans take a stand against letting these antics run unchecked. Not only is it harmful to due process and our justice system, but it belittles the credibility of true survivors of sexual assault.

No court of law would allow a witness to completely take over the scheduling as Kavanaugh’s opponents did. But like the failure of a superior army to advance to win a battle, the dilly-dallying by the Republican leadership led lost opportunity. Relatively few Americans watched the entire hearing, instead, seeing only headlines and sound bites, spun by a media determined to sink conservatives. This is fake news in its worst form.  Sexually explicit allegations are politically deadly, no matter how false and implausible they are, and the GOP-controlled chambers should never err in giving the other side a platform.

Sexually obscene testimony that is uncorroborated should not be allowed and given credibility by the Senate Judiciary Committee or any other official chamber.  Moreover, false descriptions like “attempted rape” should be ruled out of order and prohibited. The #MeToo movement grows bolder all the time, and this was just their latest high-profile hit job against an innocent conservative.

It’s high-time that Republicans take a stand against letting these antics run unchecked. Not only is it harmful to due process and our justice system, but it belittles the credibility of true survivors of sexual assault. Sexual crimes are vile, despicable acts that should be prosecuted swiftly and harshly. To allow the left to take on sexual assault as a new form of victimhood or manufactured political hit is to make a mockery of true victims and the very justice system that Democrats fein to support.

It’s time for steel backbones in the GOP to stop this new growing onslaught against truth.

Phyllis Schlafly Eagles · December 1 | We Need More Badges Herschel Walker had an iconic moment in a debate with Sen. Raphael Warnock when he … END_OF_DOCUMENT_TOKEN_TO_BE_REPLACED

What You Need to Know is Dems want a SWAT Team against the GOP? David Brock (formerly Media Matters) wants to beat up on Republicans in the House who … END_OF_DOCUMENT_TOKEN_TO_BE_REPLACED

What You Need to Know is Democrats’ plan to slow down GOP investigations. David Brock (of Media Matters) released a memo detailing a group that will … END_OF_DOCUMENT_TOKEN_TO_BE_REPLACED

Trump took center stage in Ohio and pre-announced that his reelection campaign will begin on November 15. This is a terrific preemptive strike against … END_OF_DOCUMENT_TOKEN_TO_BE_REPLACED

Elon Musk has 119 million followers on Twitter, the platform which he just bought for $44 billion. That’s more followers than Taylor Swift, whose … END_OF_DOCUMENT_TOKEN_TO_BE_REPLACED

What You Need to Know is why Trump is not an echo of other candidates before him. Phyllis Schlafly famously first used that phrase — a choice, not an … END_OF_DOCUMENT_TOKEN_TO_BE_REPLACED

What You Need to Know is Rand Paul's wife is right! Senator Rand Paul was attacked a few years ago by his neighbor who was left-leaning. When Nancy … END_OF_DOCUMENT_TOKEN_TO_BE_REPLACED

Phyllis Schlafly Eagles · December 2 | The Past, Present, and Future of the War on Christmas Haul out the holly and bring out the boxing gloves. … END_OF_DOCUMENT_TOKEN_TO_BE_REPLACED