President Trump’s party controls Congress, but one would never know that by how they have been AWOL (absent without leave) while courts block Trump at every turn.  Paul Ryan, the Speaker of the House who is retiring at the age of only 48, is doing so little that the public might wonder if he is even still in office.

Meanwhile, the judicial war of resistance against Trump continues unabated.  In the last few weeks and months, federal courts have issued rulings requiring Trump to restart DACA, fund sanctuary cities, stop asking about citizenship in the census, include transgenders in the interpretation of Title IX, reunite illegal alien “families” even where the adults are criminals who have already been deported, and so on. 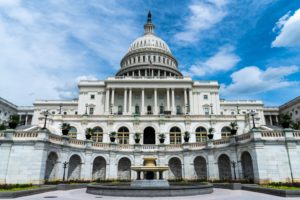 The power vacuum on Capitol Hill encourages judicial supremacy, as courts see that Congress is not providing any check or balance to the overreach by the judicial branch.

Attorney General Jeff Sessions issued a statement in August criticizing the rash of judicial activism against the Trump Administration.  “We have recently witnessed a number of decisions in which courts have improperly used judicial power to steer, enjoin, modify, and direct executive policy,” General Sessions explained.

“This ignores the wisdom of our Founders and transfers policy making questions from the constitutionally empowered and politically accountable branches to the judicial branch,” he said.  General Sessions vowed that the “Trump Administration and this Department of Justice will continue to aggressively defend the executive branch’s lawful authority and duty to ensure a lawful system of immigration for our country.”

New lawsuits against Trump policies are being filed by the Left nearly every day.  Just weeks ago, four liberal-controlled cities – Baltimore, Chicago, Cincinnati, and Columbus – asked a federal court to force Trump to support Obamacare.

Imitating a familiar pattern pursued in other cases, this new lawsuit for Obamacare quotes out-of-court statements by President Trump as though they were evidence.  For example, the lawsuit demands relief because Trump has said that “essentially, we have gotten rid of” Obamacare.

The power vacuum on Capitol Hill encourages judicial supremacy, as courts see that Congress is not providing any check or balance to the overreach by the judicial branch.  Like unsupervised kids in a candy store, judges will grab as much power as they can until Congress checks their conduct.

What You Need to Know about the January 6th prisoners. It seems like those who were arrested because of their involvement on Jan. 6th are being held … END_OF_DOCUMENT_TOKEN_TO_BE_REPLACED

What You Need to Know is that populism is rising! There was another Election Day in France on Sunday. The way they do elections is impressive and is a … END_OF_DOCUMENT_TOKEN_TO_BE_REPLACED

Phyllis Schlafly Eagles · #WYNK: Life Is On the March! | June 17, 2022 #ProAmericaReport The following is a transcript from the Pro America … END_OF_DOCUMENT_TOKEN_TO_BE_REPLACED

Phyllis Schlafly Eagles · #WYNK: Who's Against Trump | June 13, 2022 #ProAmericaReport The following is a transcript from the Pro America … END_OF_DOCUMENT_TOKEN_TO_BE_REPLACED

By Mason Mohon, Phyllis Schlafly Eagles Intern Abortion is the most controversial issue in the United States today, with both sides having great … END_OF_DOCUMENT_TOKEN_TO_BE_REPLACED

For Immediate Release: June 24, 2022Contact: Ryan Hite, Communications Director Now Is The Time to Stand Up for Moms and Babies Without … END_OF_DOCUMENT_TOKEN_TO_BE_REPLACED