When liberals know they do not have a real argument to give on an issue, they overcome that gap in logic by tacking the suffix “phobia” on a word and turning it into an insult. If you want America to control her borders, you have xenophobia. If you believe traditional marriage is the foundation of society, you have homophobia. If you want America to use common sense to combat terrorism, you have islamophobia. Like the trigger words racist and sexist, these “phobias” do not create a dialogue. Rather, their only purpose is to shut down any chance of a real dialogue. However, Phyllis Schlafly was clever enough to turn their own talking points around. In that spirit, the June 2008 Phyllis Schlafly Report created the term “fatherphobia” to describe inordinate aversion to fatherhood by feminists.

One of the biggest attacks on the family today is the near-omnipotent power of family courts. When divorce cases come up, judges have unilateral authority to place a child with only one parent and to exact large child support payments from the other parent. The biggest problem with this arrangement is that so many of these judges are afflicted with “fatherphobia,” which is the presumption that fathers are not important in the life of their children. So often, these family courts will ignore almost any attempt at equal shared custody. If the presumption of equal shared custody were adopted over the assumption of single-parent custody (for the mother) and the other parent making payments but getting little or no visitation rights (for the father,) the child would win in almost every situation.

Unfortunately, family courts justify their decisions under the mantra of “the best interest of the child.” Obviously, that kind of vague language can be used to justify almost anything in the wrong hands. Our culture and judicial precedent has always held that the best interest of the child is determined by the parents. Whenever that societal anchor is removed from the decision-making process, judges reach for whatever they can in order to justify their rulings. Often, they end up reaching for the opinions of so-called “experts,” including lawyers, psychologists, custody evaluators, and parenting counselors. While all of those professions are very diverse in their emphases and aims, they have one thing in common: they are not the parents. When the rights of parents are abridged without due process or the possibility of appeal, we should know that the family is under attack. Complicit in these bad family court decisions is a federal government that rewards those states that penalize fathers. The feds award billions in block grants to states that can show that they have lots of fathers paying child support. In that way, they are very directly incentivizing states to minimize the interaction between fathers and their children.

While the laundry list of phobias that the Left throws around may not have validity to it, fatherphobia is taking a very real toll on American families. As a culture, we must remember that children with both parents in their lives are the ones who are the most likely to become productive citizens. We must also remember that parents are wired to care for their children in a way that no lawyer or judge will be able to do. Thus, our society has a vested interest in keeping fathers with their kids and making sure that parents have the authority in how their children are raised. If we allow a fear of fathers to rule our courts, the fathers will not be the only ones suffering. Fathers have always been and will continue to be a tangible good for kids and for our American society.

To view the June 2008 Phyllis Schlafly Report in its entirety, please click on the image below. 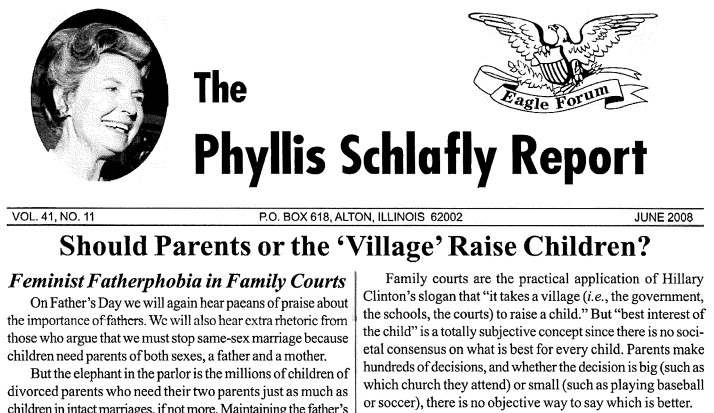 Mike Davis is the former Chief Counsel for Nominations to the Senate Judiciary Committee under Sen. Chuck Grassley. In his current role as founder and … END_OF_DOCUMENT_TOKEN_TO_BE_REPLACED

Phyllis Schlafly Eagles · May 19 | Boys and Girls and Grades? ** Previously recorded by Phyllis Schlafly // May 2015 ** Colleges claim they … END_OF_DOCUMENT_TOKEN_TO_BE_REPLACED

What You Need to Know Feminists don’t what they are doing! They are about to make another marketing error by utilizing all the wrong imagery and … END_OF_DOCUMENT_TOKEN_TO_BE_REPLACED

Phyllis Schlafly Eagles · #WYNK: Montpelier is going Woke | May 19, 2022 #ProAmericaReport The following is a transcript from the Pro America … END_OF_DOCUMENT_TOKEN_TO_BE_REPLACED

What You Need to Know is our election system is broken! It's failing and We the People have no confidence in the system. Pennsylvania has shown again … END_OF_DOCUMENT_TOKEN_TO_BE_REPLACED