Liberals are trying to drum up support for a new constitutional convention. Unfortunately, even some conservatives are falling for their classic liberal tactics. Though organizations like the Convention of States Project claim to be conservative, one must only look at the tactics they use to realize that they are not really on our side. While we favor logic and reason, they use confusion and deceit to push their position. 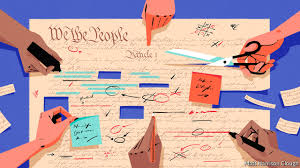 Another liberal tactic convention supporters like is to make false comparisons. Liberals use this tactic to point to Denmark as an example of successful socialism, even though the Danish prime minister has openly said that they are not a socialist nation. Convention supporters point to a so-called “simulated convention” that took place in 2016 as an example of how an Article V convention could work. However, the simulation was a total joke. The rules had been handed down to them by COS beforehand and the only big money influence allowed was from COS. The worst part was that the delegates themselves were handpicked conservatives. They had a few token Democrats, but even the entire delegations of California and New York were Republicans. What a joke!

Don’t fall for the liberal tactics. We must oppose any attempt at a new constitutional convention.

Biden’s Plan to Buy Votes  As the midterm elections fast approach, Democrats have lost a key demographic that they relied on in 2020: … END_OF_DOCUMENT_TOKEN_TO_BE_REPLACED

Phyllis Schlafly Eagles · May 16 | The Trickle-Down Effect of Bad Policies Good news arrived in the district court of the District of Columbia, … END_OF_DOCUMENT_TOKEN_TO_BE_REPLACED

Phyllis Schlafly Eagles · May 19 | Boys and Girls and Grades? ** Previously recorded by Phyllis Schlafly // May 2015 ** Colleges claim they … END_OF_DOCUMENT_TOKEN_TO_BE_REPLACED