The essence of judicial supremacy is the idea that an individual or small group of unelected lawyers could unilaterally decide to change the law against all precedent and the will of the American people. That idea is not only dangerous to conservative policies, but to the very American system of government which has allowed our nation to be the best in the world. If judicial supremacy is allowed to run rampant, the democratic process and citizen participation in government is essentially meaningless. The people have no voice whenever the judiciary is given total and unchecked power. With that in mind, Phyllis Schlafly pointed to a botched attempt at judicial supremacy in the infamous case of Newdow v. United States. From a victorious article in the April 2004 Phyllis Schlafly Report, Phyllis proclaimed that “God Is Not So Easily Defeated.”

It is no exaggeration to say that liberals who want to force their views on everybody else will shop around for whatever court might give them a desirable outcome. Outspoken atheist Michael Newdow was determined to have the words “under God” removed from the Pledge of Allegiance. Unfortunately, judicial procedure mandates that one who brings a lawsuit actually have a stake in the alleged injustice. This is known as a person’s “standing” in the case. For example, if someone were to sue for an injustice committed against their neighbor, the case would be thrown out of the court because the injustice was committed against the neighbor and not the person who filed the lawsuit. Unfortunately for him, Michael Newdow had no legal standing to present a case against the Pledge. He could not argue that he was being compelled by the government to endorse religion because no American adult has ever been compelled by law to recite the Pledge.

In a very sneaky attempt to impose his views on everyone else, he sued on behalf of his young daughter claiming that she was being indoctrinated by the Pledge when she recited it at school. While this would ordinarily give him standing in the case, he had his daughter out of wedlock and the court granted him no legal guardianship over the child. What’s more, the child herself and the mother who had full legal custody were both strong Christians and had no problem with the Pledge whatsoever. The mother even filed a motion to dismiss Newdow’s complaint because she and her daughter wanted nothing to do with his anti-God crusade. However, Newdow did not care about his daughter or the public’s perception of her. He only cared about securing his victory at any cost and by any means necessary.

In the first appearance of the case before a U.S. District Court, the judge ruled that the Pledge is constitutional. Newdow then appealed the case to see if his luck would be any better in the Ninth Circuit. In a move that shocked the American people, the Ninth Circuit ruled that the Pledge of Allegiance was an unconstitutional violation of church and state. Americans around the country were livid. In an unprecedented display of unity, Congress passed a strong resolution reaffirming the validity of the phrase “one nation under God” by a margin of 401 to 5 in the House and unanimously in the Senate. Like their elected officials, citizens around the nation declared that they would not be silenced by an imperial judiciary.

When the case went to the Supreme Court on March 24, 2004, the effects of public outcry in favor of the Pledge did not go unheeded. Of the nine justices, five ruled that Newdow did not have standing in the case. Three other justices said that while they thought Newdow had standing, they did not agree with his assertion that the phrase “under God” in the Pledge constituted an establishment of religion. The ninth justice was Antonin Scalia. He recused himself before the case even started because he felt public comments he had made against the Ninth Circuit’s ridiculous ruling constituted a breach of impartiality. So, the case was effectively struck down by unanimous consensus of the Supreme Court. When the people stand united against judicial supremacy, not even the Supreme Court can stand in the way. Do not be fooled into thinking that the unelected judiciary can pass down the “law of the land” to us “helpless” citizens. The April 2004 Phyllis Schlafly Report teaches us that as long as the American people are willing to fight against the shackles of tyranny, we can overcome the oppression of activist judges in their quest to eradicate God and family from the American way of life.

To view the April 2004 Phyllis Schlafly Report in its entirety, please click on the image below. 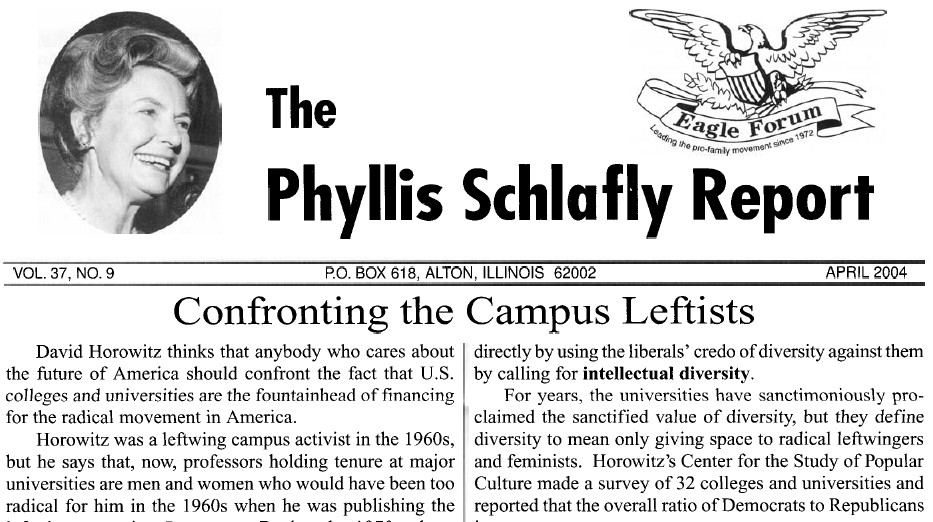 What You Need to Know is Our Systems are Broken! With the recent gun-related tragedies, we see that restrictions aren’t enough. And gun control isn’t … END_OF_DOCUMENT_TOKEN_TO_BE_REPLACED

What You Need to Know is the Border is about to be totally open! In just a few days we are going to see around 18,000 illegal aliens crossing our … END_OF_DOCUMENT_TOKEN_TO_BE_REPLACED

For Immediate Release: May 27, 2022Contact: Ryan Hite, Communications Director Pro-Life Americans Will Not Be Silenced By Pro-Abortion Scare … END_OF_DOCUMENT_TOKEN_TO_BE_REPLACED

What You Need to Know is Pelosi is Wrong or Lying. The archbishop came out saying that Speaker Nancy Pelosi will be denied Holy Communion because of … END_OF_DOCUMENT_TOKEN_TO_BE_REPLACED

Phyllis Schlafly Eagles · May 27 | A Horror Story in Washington, D.C. A horror story unraveled in our nation’s capital that would leave any … END_OF_DOCUMENT_TOKEN_TO_BE_REPLACED