The United States Constitution has been amended only 25 times in more than two centuries, and only L6 times if you consider the Bill of Rights as a single act. Yet now, in the third year of our third century, we have two constitutional amendments rushing to ratification, both arising from voters’ anger at the Imperial Congress.

Last week, the 38th state ratified what is now known as the James Madison Amendment (although the first Ten Amendments were also the brainchildren of the man we call the Father of the Constitution), What Madison planned to be the Second Amendment, and will now probably be called the Twenty-Seventh Amendment, is striking in its simplicity: “No law varying the compensation for the services of the Senators and Representatives shall take effect until an election of Representatives shall have intervened.”

James Madison was polite as he attempted to restrain the power of Congress. “There is a seeming impropriety,” he wrote, “in leaving any set of men without control to put their hands into the public coffers, to take out money to put in their pockets.”

Madison said that leaving members of Congress to regulate their own salaries was “an indecent thing and might in tine prove a dangerous one.” He surely would he popular today; he might even be elected President in the modern era, too. Most Americans agree that Congress’s last pay raise, passed in the middle of the night, was, indeed, “indecent.”

Although submitted to the states in the original Bill of Rights package, only six states ratified it in the 18th century. Probably most people then thought it ludicrous that congressmen would ever be so bold as to raise their pay during their current term of office.

The rest of the ratification history is unique. One state ratified it in the 19th century, one state in the 1970s, 24 in the 1980s, and a final eight states in the 1990s. You could hear the celestial trumpets blaring as the Michigan Legislature ratified it last week without one dissenting vote.

The debate among law professors has begun over whether a two- centuries-old amendment stil1 has constitutional life, or whether it withered and died with the passage of time. It contained no self- limitation clause as do most 20th-century amendments.

Meanwhile, another constitutional amendment is rushing to passage, with no doubts about its legality but ominous and unanswered questions about its intended and unintended effects. It is a desperate plunge into a canyon filled with constitutional, legal, and economic dilemmas.

Called the Balanced Budget Amendment, it is earnestly supported by Ronald Reagan and George Bush, but also has some advocates who are not singing from the same score sheet, such as Senator Paul Simon. In the heyday of lobbying for the Balanced Budget Amendment during the Reagan Administration, when it narrowly failed to pass, a federal balanced budget was a realistic goal because our expanding economy was producing tax revenues so fast that the budget would have come into balance if Congress had simply frozen spending at then-current levels.

The fiscal picture is very different today. When I asked some members of Congress now pushing the Balanced Budget Amendment the question, What will this Amendment do to our current $400 billion deficit, I received looks of quiet desperation. Nobody seems to know. Here are some options:

Any of these options would probably generate even more cynicism than we have at present about the failure of Congress to perform its duties.

Congress nay think that, it. is postponing the date of reckoning because ratification by 38 states is a long-drawn-out procedure. It is more likely that, if Congress passes a Balanced Budget Amendment this year, it will break all speed records for ratification and be ratified in 1993.

Then, what happens to the $400 billion deficit? 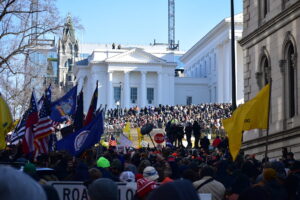 Phyllis Schlafly Eagles · August 2 | Is There Common Ground On Violent Crime Prevention? We all want to find ways to prevent violent crime in … END_OF_DOCUMENT_TOKEN_TO_BE_REPLACED

For Immediate Release: August 12, 2022Contact: Ryan Hite, Communications Director Washington, D.C.: "Even as all attention has been on the … END_OF_DOCUMENT_TOKEN_TO_BE_REPLACED

Phyllis Schlafly Eagles · August 12 | How To Celebrate America's Big Birthday For many years, Phyllis Schlafly championed the idea of … END_OF_DOCUMENT_TOKEN_TO_BE_REPLACED