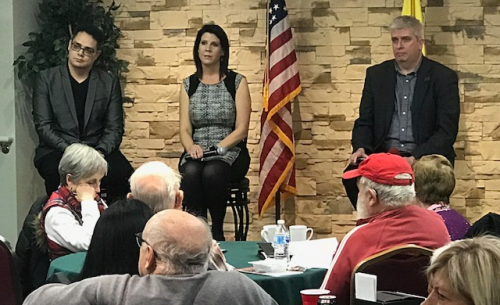 Every day more and more information is coming out on the issue. “In making the documentary the plug had to be pulled on July 31, 2018, despite so much that has happened after that date,” Taylor told the audience.

The Creepy Line reveals how Google searches and Facebook newsfeeds can bias opinions without the reader knowing by manipulating search engines and news feed, presenting a serious threat to America’s democracy and elections.

The film’s title is from a remark made by former Google CEO Eric Schmidt several years ago in explaining how the company handles privacy:

“There’s what I call the ‘Creepy Line,’ and the Google policy about a lot of these things is to get right up to the creepy line but not cross the line.”

“Not so” said Matthew and Michelle Taylor.  “The documentary proves this to be false. Google does cross over the creepy line.”

Silicon Valley, at the end of the 20th century, entered  the information age that now spans the world through the Internet.  The promise was to take all the world’s information and make it useful to everyone — almost like magic — with just a single word, “Search.”

Google and Facebook were both founded by mathematicians who promised to create a free flow of information.  Larry Page and Sergey Brin founded Google in 1998 while Ph.D. students at Stanford University in California. Their site was named after a googol — the name for the number 1 followed by 100 zeros — found in the book “Mathematics and the Imagination” by Edward Kasner and James Newman.  Facebook was launched on February 4, 2004, by Mark Zuckerberg, along with fellow Harvard College students and roommates

The “how” of making money soon became an issue, which was solved through tracking individual’s searches. Google could tell whether you were Republican or Democrat or gay or straight.  Such information building blocks were used to construct individual profiles to sell on the Internet through targeted ads to the users.

Google was able to convince people it was well meaning and not harmful. Google even adopted a corporate slogan in 2003, “Don’t be evil,” but evil was never defined.  After all, Google did have a clean homepage to convince users it was harmless; nevertheless, once people started going directly to websites so Google couldn’t track them through searches, Google built a browser, Chrome, to track them wherever they were.  Google also came up with an operating system (Android) for smartphones that tracks what you’re doing — even when you’re not online. Google likewise built apps like Google Docs and Google Maps and other platforms to collect even more data about people.

Why are people so accepting that the data Google and Facebook collects isn’t going to be used to manipulate them? An unconscious mind is being built by Google and Facebook that is filtering the world for us as they control the portals to information which makes us easier to control and manipulate.  People possibly tell Google more than they would tell their wives or close friends. Google reads emails in order to send you targeted ads. Google even tracks your drafts that you didn’t send

The reason lies in the fact that both Google and Facebook give people things they want and don’t want to give up.  Google offers quick web searches and free e-mails, while Facebook offers the ability to connect with others and then being able to say whatever they want.

Algorithms filter and manipulate our thought

Algorithms are behind the system of manipulating what we see by filtering out results and ranking them in order.  You want the answer, not billions of webpages, so Google sorts through the hundreds of billions of webpages in its system to give back useful and relevant results in a fraction of a second. This creates a problem when it comes to political issues, because it will always favor one candidate over another, ensuring that a handful of people at the big technology companies will determine what a billion people think.  Rarely do people go to the second page of search results, meaning that Google’s Search Engine Bias for one candidate can shift lots of votes.

As stated by filmmaker, Andrew Marcus,

“What big tech has done to conservative and other undesirable publishers is nothing short of a digital Kristallnacht.”

As such, Facebook delivered for Democrats in the midterms by erasing two billion GOP page views, thereby eliminating conservative content to suburban females.  While in 2016 suburban voters and women would check Facebook pages and get conservative news, it’s no longer true.  These same voters went Democrat in the midterms.

Facebook and Google say they are not legally responsible for things people say on their sites, claiming they operate on a neutral platform; however, the companies do take very aggressive editorial control and should not hide behind the law.  As to why our government doesn’t interfere?   Bias exists as our federal government uses Google tools, including Gmail.  In that the Federal government runs on Google, how could it regulate it?   Then too, Google and Facebook regularly lobby state legislatures against passing stronger privacy legislation.  Here is an excellent article by Tom Wu of 11/13/2018, detailing how big tech companies get by without regulation.  https://www.wired.com/story/book-excerpt-curse-of-bigness/

Google maintains a very dangerous blacklist called the quarantine list. It contains millions of websites that Google doesn’t want you to see. And there are no relevant regulations and no oversight.

Dr. Jordan B. Peterson, a Canadian professor who appears in the documentary, had his videos censored on Google-owned YouTube, which had received millions of views, because in his videos he was critical of using certain pronouns when it comes to referring to people. Google also shut off his Gmail account. The company said he violated their policy. But no explanation was given.

Dr. Epstein found out the hard way that Google can block a website through Firefox and Safari — even though those aren’t his browsers. It happened to him  a day after he wrote an article about whether Google could tip an election. Epstein found that Google could influence elections by 10 percent through the top search results given by Google. The day after his article was published, Google blocked Dr. Epstein’s website from the internet, claiming it had been hacked.

As to Google’s plans for the future, a recent article by Heather Kelly of CNN Business relates how Google wants its virtual assistant in every room of your house.  Google (GOOGL) imagines people living, parenting and even sleeping surrounded by its products. Voice assistants may have started in a single room for playing music, but Google’s house previews a future where almost every room has an always-listening microphone, a speaker, camera and a screen of some sort.

Google and Facebook can be likened to 1930s fascism in Italy when the government fused with large corporations, but it’s being done more cleverly now as we all opted into Google and Facebook, trusting them to make right and good decisions for us.  An unconscious mind is being built by Google and Facebook that is filtering the world for us as they control the portals to information which makes us easier to control and manipulate and has the power to undermine democracy without us knowing it.

The Creepy Line can be purchased here.  It is also available on Amazon Prime.  View the trailer here.

Big Tech companies claim to be the standard-bearers for the American right to free speech, but the facts don’t support this facade. In reality, they … END_OF_DOCUMENT_TOKEN_TO_BE_REPLACED

No matter what the Tech Giants of Silicon Valley say, America knows they have deep-rooted political bias against conservatives. The tech giants are … END_OF_DOCUMENT_TOKEN_TO_BE_REPLACED

What You Need to Know is what’s wrong with the Deep State! I don’t think we’ve seen anything like what could happen when people like Andrew Weissmann … END_OF_DOCUMENT_TOKEN_TO_BE_REPLACED

What You Need to Know is the Education Problem is looming. We have to figure out what going back to school looks like. The problem: the left and the … END_OF_DOCUMENT_TOKEN_TO_BE_REPLACED

Phyllis Schlafly Eagles · September 28 | Oppression In The Classroom Teachers are truly incredible people. By and large, they work hard to equip … END_OF_DOCUMENT_TOKEN_TO_BE_REPLACED

Phyllis Schlafly Eagles · September 22 | Real Progress For Black Americans As a parent of young children, I consider education to be tremendously … END_OF_DOCUMENT_TOKEN_TO_BE_REPLACED

What You Need To Know is Big Ten football is back! Over the weekend the Big Ten Conference Inc. spent a day and half meeting and then announced they were going to play football. This is obviously an attempt to cover their tails. Now the left is going crazy because they think it should still […]

Phyllis Schlafly Eagles · September 25 | Give Nuclear A Chance Donald Trump and Joe Biden disagree on a lot of things, but there is at least one … END_OF_DOCUMENT_TOKEN_TO_BE_REPLACED

What You Need to Know is jobs not mobs! The unemployment rate has gone down — more jobs are being created. We’re going in a good direction. Joe … END_OF_DOCUMENT_TOKEN_TO_BE_REPLACED

President Trump made a smart move by not letting Democrats get away with giving stimulus checks to illegal immigrants. However, some liberals are … END_OF_DOCUMENT_TOKEN_TO_BE_REPLACED

Phyllis Schlafly Eagles · September 29 | The Great Racism Witch Hunts 2020 is sure to be remembered for a lot of things. Our great grandchildren … END_OF_DOCUMENT_TOKEN_TO_BE_REPLACED