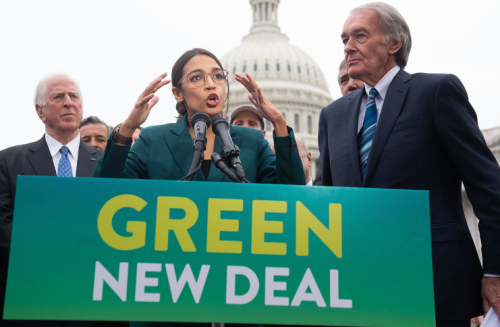 Most people in America don’t even realize that tentacles of a dangerous United Nations program are being enacted in our nation’s cities and certainly our country, with the full cooperation of those in our highest positions of authority. It is so complicated and difficult to believe that many simply dismiss it, considering it just a conspiracy theory. But even a cursory investigation reveals it is very real and the evidence is easily attained.

This intrusive, all-encompassing plan that could eventually affect every aspect of our lives is known as “United Nations Agenda 21.”  It’s pure communistic in nature. We all must fight against it if we are to remain a free people and nation. The Green New Deal happens to represent the boldest tactic yet toward the full implementation of Agenda 21 here in this nation.

The specific plan, United Nations Agenda 21 Sustainable Development, was a product of The Rio Conference held at Rio de Janeiro from June 3 – 14, 1992.   It was to be implemented worldwide in order to inventory and control all land, all water, all minerals, all plants, all animals, all construction, all means of production, all energy, all education, all information, and all human beings in the world.  As such Agenda 21 marked a new beginning for the U.N., a decisive point of departure for the world organization.

Project 21 contained twenty-seven principles warning against a mode of growth that was leading to the extinction of life on earth.  Based on two fundamental ideas, development and environment, Project 21 was introduced as a cooperative task and challenge for world nations toward this goal: to establish the basic principles that must govern the conduct of nations and peoples towards each other and the Earth to ensure a secure and sustainable future.

One hundred nations attended the 1992 Rio Education on Environment and Development.  According to the UN information Center, all nations in attendance agreed to the document.  Representing the U.S.A. was President George H. Bush (1989 – 1993), who allowed an outside entity (the U.N.) to collaborate and dictate an agenda which is already affecting our entire country and our citizens.  In a news conference given in Rio de Janeiro on June 13, 1992, Bush’s opening statement included the following remarks prior to questions taken from reporters:

“Let’s me be clear on one fundamental point.  The United States fully intends to be the world’s preeminent leader in protecting the global environment.  We have been that for many years.  We will remain so.  We believe that environment and development, the two subjects of this Conference, can and should go hand in hand.  A growing economy creates the resources necessary for environmental protection and environmental protection makes growth sustainable over the long term.”

First called a “suggestion” for “voluntary action”, not long after its introduction at The Rio Conference (also known as the “Earth Summit”), Nancy Pelosi introduced a resolution of support for the plan in Congress calling it a “comprehensive blueprint for the reorganization of human society.”

With the defeat of G.H. Bush, newly elected Bill Clinton in 1993 ordered the establishment of the President’s Council for Sustainable Development, with the express purpose of enforcing the Agenda 21 blueprint into nearly every agency of the federal government to assure it became the law of the land.  A year later in 1994, the American Planning Association issued a newsletter supporting Agenda 21’s ideas as a “comprehensive blueprint” for local planning.

The main weapon used by Clinton for his call for action was the threat of Environmental Armageddon, particularly manifested through the charge of man-made global warming, later to becoming “climate change.” It didn’t matter if true science refused to cooperate in the scheme, as actual global temperatures are not rising and there continues to be no evidence of any appreciable man-made effects on the climate.  But has truth ever been important to scare mongers?  Paul Watson of Green Peace declared: “It doesn’t matter what is true, it only matters what people believe is true.”

President Barack Obama endorsed Clinton’s efforts to have what was originally a voluntary effort for world leaders to comply to Agenda 21.  Obama, believing climate change constituted an economic and security threat to the nation, signed on to the Paris Climate Agreement in 2015 which pledged its nearly 200 participants to work to stem global warming.  Accordingly, on Sept. 21, 2016, Obama instructed federal agencies to consider climate change when drawing up their national security plans. On the same day the National Intelligence Council(NIC) backed Obama with a report saying climate change is “almost certain to have significant direct and indirect social, economic, political, and security implications [and] pose significant national security challenges for the United States over the next two decades.”

President Trump as a stumbling block

President Trump momentarily stymied the U.N movement to advance Agenda 21 worldwide in a White House Rose Garden event on June 2, 2017, and was harshly condemned, when pulling out of the Paris Accords.  President Trump has many times spoken of climate change as “a total and very expensive hoax.”  On March 28, 2017 Trump declared the costs of complying with government regulations designed to limit climate change posed a greater threat to national security than did the changes themselves. Additionally, Trump rescinded Obama’s 2016 national security memorandum and many of Obama’s other climate-related directives. Trump’s aim was to end “regulatory burdens that unnecessarily encumber energy production, constrain economic growth and prevent job creation.”

As to the Paris Accords, Dr. Bjorn Lomberg had the following to say in an article by Ed Hiserodt in the March 4, 2019 edition of New American:

“Even if we assume all promises (determined contributions of those signing on to the Paris Accords) are fulfilled by 2030, and continue to fulfill them until the end of the century, and there is non ‘CO2 leakage’ to non-committed nations, the entirety of the Paris promises will reduce temperature rise by just 0.7 degree C (0.306 degrees F) by 2100.

And even if Americans did stop producing CO2, Earth’s CO2 levels would continue to rise because China, India, and other countries are building coal-fired plants by the dozen, which will like more than offset any reductions Americans make.”

Enter the Green New Deal, the boldest tactic yet, as proposed by AOC when the Democrat Socialists took control of the House in the 2018 midterms.  The origins and the purpose of the Green New Deal are not unlike the positive-sounding objectives of Agenda 21: to protect the environment and make a better life for all of us.

In that the forces behind Agenda 21 were becoming both impatient and scared because after 27 years Agenda 21 had not yet been realized, coupled with growing apprehension that people around the world were starting to wise up to the real nature of Agenda 21, permitted the clock of deception to be removed to reveal the true goals of the Green New Deal, socialism and global control as a way to advance Agenda 21.  Still undetermined, however, is whether through Congressional action the Green New Deal could be enacted into law.  Presently the most ambitious climate change and clean energy policies are coming from states.

If Illinoisans like the Green New Deal championed by Congresswoman Alexandria Ocasio-Cortez, they will like what Illinoisans have in store for them.  Illinois’s general assembly is weighing a bill — the Clean Energy Jobs Act (SB 2132/ HB 3624) — that sets an aggressive target of decarbonizing the state’s energy by 2030 and running the state completely on renewable energy by 2050. That includes deploying more than 40 million solar panels and 2,500 wind turbines alongside $20 billion in new infrastructure over the next decade. Its central goals are 100 percent carbon-free electricity production by 2030 and 100 percent renewable everything across the state by 2050. That means the 2050 goal also precludes nuclear energy!

It isn’t only states who are determined to convert to 100 percent renewable energy. There is a direct link between U.N. Agenda 21, as introduced to the world at the Earth Summit in Rio in 1992, and groups who are trying to gain control over local development and energy policies, perhaps even in your community or city?  As far back as 1994 the American Planning Association issued a newsletter supporting Agenda 21’s ideas as a “comprehensive blueprint” for local planning.

In this recent article by Steve Goreham, a policy advisor to The Heartland Institute, a speaker, author, and researcher on environmental issues as well as an engineer and business executive, he writes: 100% percent renewable by 2050 – Is the Mayor of Porkopolis Smarter than a fifth Grader?, Goreham writes:

“Mayors in more than 100 US cities have announced plans to transition their electrical power systems to 100 percent renewable by 2050. They propose replacement of traditional coal, natural gas, and nuclear generating stations with wind, solar, and wood-fired stations. But none of these mayors has a plausible idea of how to meet their commitment.”

“Ever since the beginning of modern science, the best minds have recognized that “the range of acknowledged ignorance will grow with the advance of science.”

Unfortunately, the popular effect of this scientific advance has been a belief, seemingly shared by many scientists, that the range of our ignorance is steadily diminishing and that we can therefore aim at more comprehensive and deliberate control of all human activities. It is for this reason that those intoxicated by the advance of knowledge so often become the enemies of freedom.”

As more American city, county, and state governments are duped by the global warming fanatics (alarmists) into initiating new harsh laws and removing individual freedoms, the public can no longer afford to yawn and ignore U.N. Agenda 21 and all its tentacles into our lives.

What You Need to Know is Trump is stronger than Biden. Our American leaders sending tanks and weapons to escalate the war in Ukraine aren’t in line … END_OF_DOCUMENT_TOKEN_TO_BE_REPLACED

What You Need to Know is we are in a proxy war with Russia. Until now, we’ve been able to at least try to say we have given Ukraine defense weapons … END_OF_DOCUMENT_TOKEN_TO_BE_REPLACED

What You Need to Know is we’re in a new pro-life America. Today’s March for Life is the first during which we can celebrate the overturn of Roe v. … END_OF_DOCUMENT_TOKEN_TO_BE_REPLACED

What You Need to Know is Mom first! Life begins at conception. But what if the pro-life movement reframed the battle. What if we advertised that life … END_OF_DOCUMENT_TOKEN_TO_BE_REPLACED

Predicting an imminent worldwide recession, global business elites convene at the Alps ski resort of Davos, Switzerland as they do every year in … END_OF_DOCUMENT_TOKEN_TO_BE_REPLACED

What You Need to Know is a brief lesson in original classification authority. You can quibble about whether documents were properly declassified or … END_OF_DOCUMENT_TOKEN_TO_BE_REPLACED

What You Need to Know is the Chinese regime may be on the run. After years of their draconian ‘Covid Zero’ policies that brought more terror to an … END_OF_DOCUMENT_TOKEN_TO_BE_REPLACED