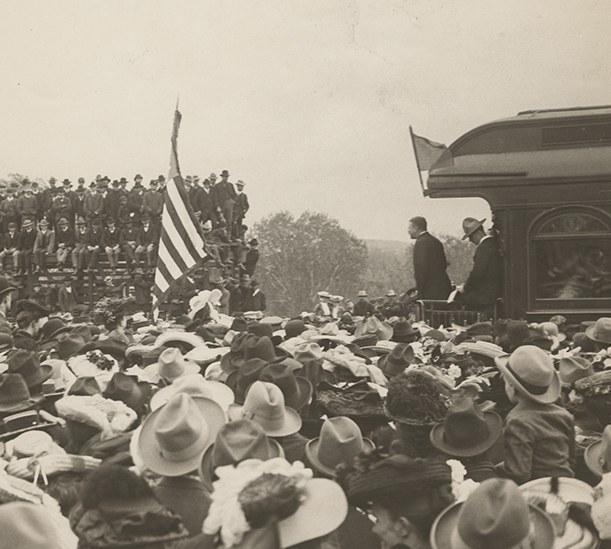 Theodore Roosevelt is known for many things. He is known for being the twenty-sixth president of the United States, for founding the National Park system, for sporting an impressive mustache, and for offering the famous foreign policy advice to “speak softly and carry a big stick.” Teddy Roosevelt is among the most unique men to ever hold the office of the presidency, and his rugged spirit has molded a legacy that officeholders should aspire to today.

In honor of his birthday, I’d like to read a quote from one of Teddy’s most memorable speeches. It not only provides a clear picture of his philosophy as a leader, but also of the manner in which he lived his public and private life. Listen to Roosevelt’s immortal words:

“It is not the critic who counts; not the man who points out how the strong man stumbles, or where the doer of deeds could have done them better. The credit belongs to the man who is actually in the arena, whose face is marred by dust and sweat and blood; who strives valiantly; who errs, who comes short again and again, because there is no effort without error and shortcoming; but who does actually strive to do the deeds; who knows great enthusiasms, the great devotions; who spends himself in a worthy cause; who at the best knows in the end the triumph of high achievement, and who at the worst, if he fails, at least fails while daring greatly, so that his place shall never be with those cold and timid souls who neither know victory nor defeat.”

Teddy Roosevelt’s words still echo generations later as our nation seeks men and women who will be in the arena, who would see their faces marred by dust and sweat and blood for a worthy cause. That is what bold grassroots action is all about. Whether your arena is on the campaign trail or in the local school board, never be afraid to try and fail. With our nation’s future in the balance, we have no time for cold and timid souls. Make the decision to step into the arena today.

Phyllis Schlafly Eagles · #WYNK: A New Pro-Life America | January 20, 2023 #ProAmericaReport The following is a transcript from the Pro America … END_OF_DOCUMENT_TOKEN_TO_BE_REPLACED

Phyllis Schlafly Eagles · #WYNK: Thank the Freedom 20 | January 11, 2023 #ProAmericaReport The following is a transcript from the Pro America … END_OF_DOCUMENT_TOKEN_TO_BE_REPLACED

For Immediate Release: January 26, 2022Contact: Ryan Hite, Communications Director Solution Staring Us In the Face to Save American Lives: Shut the … END_OF_DOCUMENT_TOKEN_TO_BE_REPLACED