President Trump reasserted American leadership on trade and security in the last week, sending his doubters into disarray. Trump’s historic performance at the G-7 meeting in Canada, followed quickly by his meeting with North Korean dictator Kim Jong Un in Singapore, left no doubt that America is indeed great again on the world stage.

Justin Trudeau, Canada’s leftwing prime minister, was unnecessarily belligerent to Trump at the end of the G-7 summit, and Never-Trump Republicans should not have piled on. Lame duck Republican senator Jeff Flake, who is so unpopular in Arizona that he decided not to run for reelection, once again lashed out at Trump, as did other globalist Republicans.

But American workers are behind Trump, and the stock market shows no harmful effects of Trump’s pro-American, pro-tariff trade policies. The G-7 summit, a gathering of the leaders of seven large economies, demonstrated that it has become a farce. 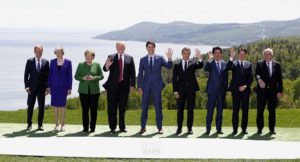 It held a breakfast meeting devoted to “gender equality,” and we applaud how Trump showed up late for such an unproductive attempt at political correctness. The politicians at the G-7 summit are in denial about how voters throughout Europe, as in the United States and more recently in Italy, are rejecting the business-as-usual approach of the Establishment.

Meanwhile, although Trump’s pro-tariff positions receive all the attention, a little-noticed appointment back home may be nearly as important. Makan Delrahim, Trump’s handpicked leader of the antitrust division at the Department of Justice, is working hard to ensure more competition domestically and Silicon Valley monopolies are nervous about this.

Small businesses create far more jobs than big business does, a fact lost on the pre-Trump Republican Party. President George W. Bush pursued policies favorable to big business and it all cratered in 2008, handling the election to Obama.

Once the home of countless tech start-ups, Silicon Valley has devolved into a two-tier society of haves and have-nots, and little real competition. A mere handful of giant companies like Apple, Facebook, and Google have exploited the H-1B visa program and failed to compete with each other for labor, such that salaries have not kept up with the cost of living there.

The latest average salary increase of tech workers in Silicon Valley — the region between San Francisco and San Jose that is the birthplace of many familiar technology behemoths — is only 0.4% per year. That is because there is not real competition there, but merely large companies that fight to maintain the status quo with them on top.

The cost of living goes up there, but real wages do not. The result is a large homeless population of people who simply cannot earn enough, even working multiple jobs, to afford housing.

Worn-out RVs line one edge of Stanford University, and homeless camps of families litter the landscape close to wealth centers like Google’s headquarters. Monopolies interfere with a healthy distribution of wealth, creating enormous disparities more familiar in countries like Mexico, where a few people control much of the property.

Big companies rarely innovate, and in fact often stifle inventions that threaten their dominance. The largest Silicon Valley companies have been most responsible for changing our patent system from one that rewarded the inventor to one that favors big business.

Trump’s outspoken criticism of Amazon.com has led others in his Administration and the Republican Party to look more critically at Silicon Valley monopolies like Facebook. The scrutiny is long overdue, and some antitrust enforcement may be just what the doctor ordered.

This is welcome relief from the failed policies of the administration of President George W. Bush, which rolled over for the Microsoft monopoly and got nothing for the American public in return. Bill Gates then poured some of his wealth into promoting Common Core and other liberal goals, which conservatives have fought ever since.

Many of these tech monopolies are too anxious to give away American trade secrets to China in exchange for making a few bucks in that market. Already China is manufacturing cheap smart phones, but where did it acquire the secrets to do so?

Apple itself did not invent the smart phone, as the Blackberry deserves more credit for that. But then Apple embarked on a business plan of selling in China, which typically requires giving China technology secrets to do so.

The profits Apple made on those sales have been mostly kept outside the United States, so they have not helped Americans at all. The long-term effect of Apple’s sales in China may simply be to transfer secret technology developed here to a foreign power hostile to the United States.

A strong antitrust policy against the monopolistic technology companies will complement Trump’s principled support of fair trade. Trump was right to reject the globalism of the G-7 summit, and to send a long-overdue message that the United States will no longer be taken for granted on trade.

Proving once again that he is in touch with ordinary Americans, Donald Trump selected education for the first video message of his 2024 presidential … END_OF_DOCUMENT_TOKEN_TO_BE_REPLACED

Phyllis Schlafly Eagles · #WYNK: Trump's Record is Baked In | January 30, 2023 #ProAmericaReport The following is a transcript from the Pro … END_OF_DOCUMENT_TOKEN_TO_BE_REPLACED

What You Need to Know is a lesson on documents and double standards. Suddenly everyone has classified documents and everyone is spinning the stories … END_OF_DOCUMENT_TOKEN_TO_BE_REPLACED

Phyllis Schlafly Eagles · February 8 | Leftist Hollywood's Downward Spiral Looking back on 2022, it is plain to see that Democrat-dominated … END_OF_DOCUMENT_TOKEN_TO_BE_REPLACED