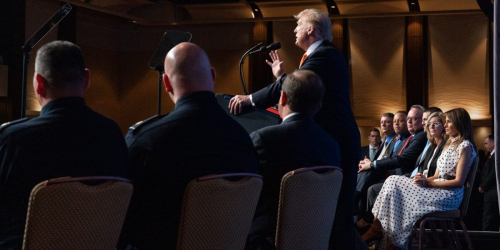 President Trump has endured more negative media attention than most other former American presidents, and it began within his first 100 days in office. According to a study conducted by PEW Research Center, only 11% of stories about our President had a positive assessment of him, compared to 44% negative assaults. Interestingly, most media sources chose to concentrate more on their opinion of Trump’s character than his policies.

Reasonable people would consider this not only unfair to the President, but also detrimental to our citizens who were largely denied facts about many, if not most, of his accomplishments. This same media dishonesty continues today. Trump’s tweets are constantly under fire, when Trump is only using this accepted social media to get his message out to the American people, as other presidents have done by using radio and television. President Coolidge delivered the first State of the Union broadcast on radio.  President Truman presented the first presidential speech on TV.

The release of the Mueller Report likewise points to the alignment of the media with the Democrat Party.  Trump was accused for two years of being guilty of collusion with Russia despite having been cleared of the collusion charge in the Mueller Report. But where is the apology and/or correction from the mainstream media for their inaccurate reporting to the American people?  The media is carrying water for the phony obstruction charges in the second part of the Mueller Report that House Democrats are now pursuing.  In that Democrats are still unable to accept the fact that Hillary did not win in 2016 and continue to participate in what appears to be a coup to dethrone a duly elected president, is unacceptable to many American citizens.

Particularly telling is that during the early days of the Trump Administration the mainstream media rarely cited sources outside of government which would have confirmed Trump’s opinion and facts on issues.  Experts were only cited in 16% of stories and citizens only 5% of the time.  A  common source many media sources used, at least 35% of the time, was other news organizations or journalists

This obvious media bias was blatantly noticed on Trump’s Inauguration Day.  Pictures were published of empty chairs at the event with stories indicating lower attendance than at previous President’s inaugurations.  However, the stories failed to mention Washington D.C. was experiencing a rainy morning when the pictures were taken, and that the chairs were all filled when the event began. This is the same media that found little fault with President Obama’s mistakes and/or misjudgments, such as the horrendous tragedy in Benghazi and the serious mistakes made in Obama’s “Fast & Furious” plan, until circumstances finally forced them to do so.

When the media succumbs to picking favorite officials based on likability or Party preference, our citizens are denied honest, factual reporting and thus are at a disadvantage to distinguish fact from fiction. For those of us who have used a source believed to be reliable but suffered the embarrassment of discovering that not to be the case, we can fully appreciate the necessity of finding accurate sources that we can fully trust.

Social media sources such as Facebook and Twitter cannot be counted upon to provide the public with facts, as they provide considerable bias at the same time.  While we tend to tune into the sources and various commentaries with which we agree, it is wise to expand and check as many sources as possible, if for no other reason than to know what your opposition is saying.

Trump as the Scapegoat

By now there is an awareness that an attempt was made to blame President Trump for all the things that are wrong in America, such as when Jussie Smollett falsely accused two white MAGA-hat wearing white guys of beating him up and an Indian named Nathan Phillips lied about being threatened by a bunch of Christian high school students from Kentucky.

The setting for Smollett was Chicago and, for Phillips, Washington, D.C., but similar events have taken place since 2016 in places ranging from Greenville, Mississippi to Santa Monica, California, and from Lawnside, New Jersey to Rehoboth, Delaware.

An impressive number of Democrats have declared their candidacy for President, apparently believing President Trump is vulnerable in the next election.  However, if we have learned anything about President Trump, it is that he has the ability of Houdini to surprise us with the unexpected and usually ends up with a smile as it becomes evident he has succeeded … whether that is a political contest or a “battle of wits” with other World leaders.

In that Donald Trump carried off the biggest political upset since Harry Truman defeating Thomas Dewey in 1948, why is it that not a single politician tries to emulate Trump’s unscripted approach to public speaking?  Perhaps Trump, having spent so many years hosting a reality TV show, understands he’s not just playing to the crew in the studio, whereas the typical politician imagines he or she is impressing millions sitting at home if the party faithful in the arena are seen clapping and cheering. This undoubtedly happened when Joe Biden announced his presidency on Monday, April 29th. It is likely that many in the TV audience punched their remotes in search of something exciting, more interesting, or amusing to see; something the audience is not doing when Donald Trump holds a televised rally as he did in Green Bay, Wisconsin on Saturday, April 27th.

Do candidates who are hoping to defeat Trump in 2020 really believe they are in sync with most American voters when they feel compelled to say the most outlandish things to distinguish themselves from their opponents?

For instance, most Americans agree that convicted felons should not be allowed to vote in our elections, but Bernie Sanders insists that even those who are still behind bars deserve to vote because “It’s inherent in our democracy.” It is doubtful even felons themselves would think that would benefit our Country and people.

Regarding Peter Buttigieg, he has much to answer for;  not because he is in favor of open borders, promotes the Green New Deal or would bankrupt the nation by making college tuition-free or mandating Medicare for All — but because he is trading on his homosexuality by attacking a good and decent man, Mike Pence.

Buttigieg has spent a good deal of time pretending that Pence is a gay-bashing bigot, although there is no evidence that the Vice President has ever been anything but supportive of his fellow Indiana politician.  The only good thing to say about Buttigieg is that he has probably nipped Beto’s presidential campaign in the bud.

On the issue of illegal immigration, President Trump has earned a standing ovation for the way he’s played the Democrats.  After years of people like Pelosi, Schumer,  Blumenthal, Ben Cardin, A O-C, Elizabeth Warren and Bernie Sanders telling us that those who sneak across our border are better, more honest and harder-working, than American citizens, we must applaud  Donald Trump who essentially said: “Okay, you want them, you can have them.  What’s more, I’ll provide transportation in order to make it easier for them to reach those sanctuary cities and states that are so eager to have them.”  It would be interesting to know how many Democrat mayors and governors would happily provide those here illegally with immunity from criminal prosecution.

The approach Democrats have chosen played right into Trump’s hands. They appear to be unaware that they are appearing to be spoiled kids kicking Santa Claus in the shins because he delivered a brown pony with white spots instead of a white pony with brown spots.

When President Obama dumped thousands of Muslims in places like Lewiston, Maine; Hazelton, Pennsylvania; Saginaw, Michigan; and Minneapolis, Minnesota, Democrats never accused him of treating human beings like chess pieces.  Could the reason possibly be that 80,000 Somalis in Minnesota turned Minneapolis’s 5th congressional district into an area where Muslim Keith Ellison could quit the House to run for state attorney general and be replaced by Ilhan Omar?

A report by WND on Tuesday, April 30, noted a warning by a former CIA official that Obama administration officials attempted a “coup” against President Trump, through the Russia investigation, and will soon face criminal charges. This is according to CIA whistle blower Kevin Shipp, who was interviewed by Greg Hunter on his USAWatchdog site: “There will be arrests and indictments without question. … This was a coup,” Shipp said. “It was a conspiracy. It was criminal activity. These people need to be indicted, charged and need to be put in prison, and if they’re not, then our Constitution is nothing more than a sham.”

It is time for the American people to learn the truth after being duped for over two years by some sources in the media and specific officials who claimed that impeachment was near for President Trump.  Why would they make false claims? More than likely to keep Trump from going about the people’s business, and/or to persuade the public our President was problematic.

Responsible people on both sides of the aisle must respond to these dubious actions by specific actors by condemning their radical statements concocted of questionable motives. We must be cautious of political entities that make radical accusations without offering a shred of proof, but who are suspected of having a personal agenda, to gain a better understanding of their agendas in the future.

What You Need to Know is Tucker is allowing the will of the people to be heard! When a huge block of Republicans and so-called conservatives are … END_OF_DOCUMENT_TOKEN_TO_BE_REPLACED

What You Need to Know is the Qatar-Europe NGO scandal continues! These global schemes with millions of dollars flowing through non-government … END_OF_DOCUMENT_TOKEN_TO_BE_REPLACED

Proving once again that he is in touch with ordinary Americans, Donald Trump selected education for the first video message of his 2024 presidential … END_OF_DOCUMENT_TOKEN_TO_BE_REPLACED

Phyllis Schlafly Eagles · #WYNK: Trump's Record is Baked In | January 30, 2023 #ProAmericaReport The following is a transcript from the Pro … END_OF_DOCUMENT_TOKEN_TO_BE_REPLACED

What You Need to Know is Trump’s record is baked in. He’s already been torn apart every which way and his record stands with all the things you like … END_OF_DOCUMENT_TOKEN_TO_BE_REPLACED

Phyllis Schlafly Eagles · February 3 | "Woman" Is the Word of the Year The internet is a powerful tool that most of us use every day. … END_OF_DOCUMENT_TOKEN_TO_BE_REPLACED