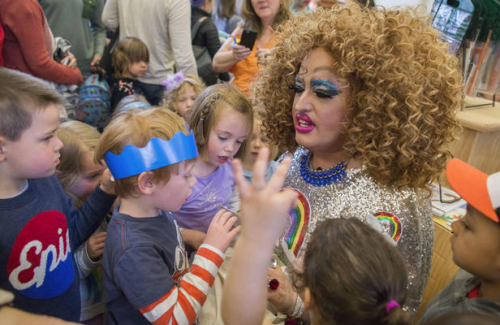 Transgenders are reading to children in public libraries these days – with the purpose of making their controversial lifestyles less shocking and more mainstream. Transgenders are the “T” in LGBT efforts to demand rights to dress as they choose in the workplace with no questions asked, to use public washrooms of the sex of their choice, and to call on taxpayers to pay for hormonal drugs and surgeries to switch sexes. The headlines concerning trans demands are numerous – and growing more and more prominent each day.

Transgenderism was the topic of the Fifth Annual Worldview Conference for Biblical Training for Today’s Culture Saturday, March 16, 2019 at Stone Church, Orland Park, IL. It was sponsored by the Illinois Family Institute.  David E. Smith has served as the organization’s executive director since August 2006. The event attracted 250 individuals from a wide geographical area, 20 of whom were deaf traveling from Northern IL and Wisconsin, for whom sign language was provided.

Walt Heyer was a husband, father and successful corporate executive (not a homosexual) who underwent gender reassignment surgery at the age of 41, going from man to woman.  Eight years later Walt went back to man again. Walt has been restored to his male gender for over 25 years and married for over 20.  Walt, as an accomplished writer of 6 books and a conference speaker, writes for the federalist.com and the publicdiscourse.com. Much insight can be gained at Walt’s own website, Sex Change Regret.

Books by Walt Heyer include Trans Life Survivors; Kid Dakota and the Secret at Grandma’s House; Paper Genders; Gender Lies and Suicide; and Walt’s autobiography, A Transgender’s Faith.  Walt’s books can be purchased at https://www.thriftbooks.com/a/walt-heyer/715381/.

As to the beginning of the transgenderism movement in the U.S., as related by Walt Heyer in his Federalist article dated May 16, 2018, Why A Compromise On Transgender Politics Would Be Capitulation?

Walt Heyer, now 79, in an MailOnline interview back in January of 2015, said he should never have been allowed to have the sex change in the first place. He claims hundreds of others are making the same mistake because surgeons are not properly evaluating their motives to change gender.  His decision started with a purple chiffon dress.

Here is Walt’s story, I Was a Transgender Woman, as told by Walt Heyer on April 1, 2015. Included below is just s teaser. You will undoubted wish to read Walt’s entire account about his life as a trans-kid, his life as a woman, and finally his return to Walt, the man.

“It wasn’t my mother but my grandmother who clothed me in a purple chiffon dress she made for me. That dress set in motion a life filled with gender dysphoria, sexual abuse, alcohol and drug abuse, and finally, an unnecessary gender reassignment surgery. My life was ripped apart by a trusted adult who enjoyed dressing me as a girl.

My mom and dad didn’t have any idea that when they dropped their son off for a weekend at Grandma’s that she was dressing their boy in girls’ clothes. Grandma told me it was our little secret. My grandmother withheld affirmations of me as a boy, but she lavished delighted praise upon me when I was dressed as a girl. Feelings of euphoria swept over me with her praise, followed later by depression and insecurity about being a boy. Her actions planted the idea in me that I was born in the wrong body. She nourished and encouraged the idea, and over time it took on a life of its own.”

Dr. Michelle A. Cretella is the Executive Director of the American College of Pediatricians.  She is a board-certified general pediatrician with a special interest in adolescent mental and sexual health. The American College of Pediatricians (ACPeds) is a national organization of pediatricians and other healthcare professionals dedicated to the health and well-being of children. Formed in 2002, the College is committed to fulfilling its mission by producing sound policy, based upon the best available research, to assist parents and to influence society in the endeavor of child rearing.

The  American Academy of Pediatrics is on record prioritizing the opinion of a five-year-old over the considered judgment of the child’s parents in this post by Kevin Edward White, Politicizing Pediatrics: How the AAP’s Transgender Guidelines Undermine Trust in Medical Authority.

Following are facts presented by Dr. Cretella through her remarks and slide presentation:

Red: A Crayon’s Story by Michael Hall  and Introducing Teddy:  A Gentle Story About Gender and Friendship by Jessica Walton

Denise Shick is author of My Daddy’s Secret, When Hope Seems Lost, and Understanding Gender Confusion. She serves on the academic council of the International Children’s Rights Institute and directs Help 4 Families Ministry.

“When Denise was nine years old, her father told her a secret:  he wanted to be a woman. Over time, this led to him wearing Denise’s clothes and abandoning their family.  As a result, Denise struggled with her own sexuality, alcohol, and thoughts of suicide.  Denise’s story is also one of redemption through Christ, and how the love and true life found only in Jesus Christ was demonstrated to her through the love of her husband.

Denise Shick now says:  “Today’s culture proclaims that a person who chooses to change gender is being honest and courageous — true to his or her nature.  Truth is what aligns with reality, and the reality is my dad was abused as a child. . . The “reality” TV shows that portray transgenderism as the new frontier in human freedom and self-fulfillment are not telling the whole story.  I know from experience.”

Douglas Wilson is a Senior Fellow of Theology at New Saint Andrews College in Moscow, Idaho, and pastor at Christ Church in Moscow.  Pastor and theologian Doug Wilson is a prolific author whose works include Rules for Reformers; Five Cities that Ruled the World; Excused Absence:  Should Christian Kids Leave Public School?; and Future Men: Raising Boys to Fight Giants. Also recommended is Wilson’s blog titled Blog & Mablog, a pun taken from Ezekiel 38:14-16. Wilson is also one of the editors of the popular homeschooling Omnibus series.

Douglas Wilson began his “Sanity as Insurrection” remarks by stating:

“When it comes to the simple idea of “telling the truth,” I have to tell you that our culture passed that exit some time ago. We don’t just need to recover the practice of telling the truth, we need to recover a universe in which telling the truth is an actual possibility. We no longer inhabit a world in which lies occur (which has always been the case). We now inhabit an imaginary world constructed entirely out of lies, and all the frayed endings of our carnal bundle are starting to snap.

And this is why we are going to win, incidentally, even though currently we appear to be losing badly. In the long run, the visiting speaker said encouragingly, stupidity never works.”

Wilson also had this to say:

“When it comes to our political life together, the two great questions of philosophy can be found on playgrounds everywhere. They are why? And who says? Insert those questions into everything.”

Thereafter, Wilson enumerated and explained seven concepts that we must learn how to handle.  For further insight read here Wilson’s remarks as presented on Saturday, March 16, 2018 at Stone Church in Orland Park.

As affirmed by Douglas Wilson:  “Any Christian who sends his child/children to a public school is crazy.”

Featured and unannounced guest Ms. Linda D. Jernigan was introduced by Executive Director David Smith. She spoke in the morning following the 2nd scheduled guest, Dr. Michelle Cretella, as an “Ex-gay” activist who regularly partners with the Illinois Family Institute, lobbying against LGBTQ rights in Illinois.

Ms. Linda D. Jernigan is an ex-homosexual who experienced same-sex attractions most of her life.  In addition, Linda never felt like a woman, not even as a young girl. By age twenty-one Linda lived as a transgendered; wearing men’s clothes, shoes, jewelry, and cologne.  Nothing about Linda’s outer appearance resembled a woman.  Linda felt like a man and lived her life as a man for a couple decades. Read here Linda’s story about her transformation back to being what God intended her to be, a woman.

David Smith opened the Worldview Conference on “trans” ideology, asking participants to call their legislators to oppose the following legislation:

Phyllis Schlafly Eagles · February 3 | "Woman" Is the Word of the Year The internet is a powerful tool that most of us use every day. … END_OF_DOCUMENT_TOKEN_TO_BE_REPLACED

What You Need to Know is about classified documents and presidential power! Joe Biden’s unmasking may be coming, thanks to the GOP House. The DOJ has … END_OF_DOCUMENT_TOKEN_TO_BE_REPLACED

Phyllis Schlafly Eagles · February 8 | Leftist Hollywood's Downward Spiral Looking back on 2022, it is plain to see that Democrat-dominated … END_OF_DOCUMENT_TOKEN_TO_BE_REPLACED