ARTICLES IN THIS ISSUE

David Horowitz Was Right–About the Left

Mrs. Trump’s ‘Be Best’ and Christmas at the White House

The principal of Cedar Hill School in Towaco, New Jersey apologized to parents after a Grinch of a sub- stitute teacher told a classroomof first-grade students that thereis no Santa Claus. The principal spoke to the substitute about “poor judgment” and later reports state that the individual will not be invited back. The superintendent of Montville Township Public Schools said she was “troubled and disheart- ened by this incident.” (NorthJersey.com, 11-30-18)

Nine-year-old Dane Best con- vinced the town board of Sever- ance, Colorado to overturn a ban on throwing snowballs, saying,“Today’s kids need reasons to play outside.” Dane found out about the ban, which had been in place for 100years, on a field trip to the town hallearlier in the year. He encouraged classmates to write letters in support of eliminating the ban. Many young- sters who had written letters sup- porting elimination of the ban also attended the board meeting. After a unanimous vote, the mayor gave Dane the privilege of “throwing the first legal snowball within town limits.” (NPR.org, 12-4-18)

Jennifer Sinclair, the principal of Manchester Elementary School in Nebraska, told teachers not to dec- orate their classrooms for Christmas in order to avoid offending those who don’t celebrate it. Sinclair said teachers could use generic winter items or even a character from the Disney movie “Frozen,” but nothing specifically Christmas-themed, like Santa Claus or reindeer. Her memo prohibited candy canes, saying, “Historically, the shape is a ‘J’ for Jesus. The red is for the blood of Christ, and the white is a symbol of his resurrection.” The district placed Sinclair on administrative leave and issued a statement saying that “the memo does not reflect the policy of Elkhorn Public Schools regarding holiday symbols in the school.” (FoxNews.com, 12-6-18)

BOOK OF THE MONTH

Different: The Story of an Outside-the- Box Kid and the Mom Who Loved Him
Sally Clarkson and Nathan Clarkson, Tyndale House Publishers, Inc., 2017, $15.99 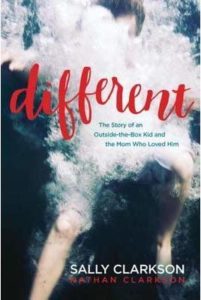 Sally Clarkson has shepherded Christian mothers for decades. Read- ing one of her many books is always a good decision. Different is written cooperatively with her son, Nathan. As the title indicates, Nathan exhibited traits that made him different from other children. Neither of them gloss over her struggles as his mother or the hardships he faced growing up.

The book is arranged in alternat- ing sections, one written by Nathan and the next by Sally. What evolves is an intriguing look at the inner workings of a complicated relationship. Sally shares her feelings during moments of exhaustion, defeat, and embarrassment due to her son’s behavior. Nathan expresses what it is like to feel odd, lonely, and scared.

Sally started from a place of faith. She writes about very young Nathan, “This one will require blindly walking in faith, with a willingness to learn and understand how to be his parent.” She says that Nathan was a “boy whose outsized needs and over-the-top behavior would test the far limits of my love, challenge my desire to have a heart of compassion, force my ability to love slowly and patiently, and defy my ability to tame or control my circumstances.”

All children are unique and pose challenges for parents. The degree of difference varies from small per- sonality quirks to actual emotional or psychological problems. Those might include Obsessive Compulsive Disorder or Oppositional Defiance Disorder, both of which were included in Nathan’s diagnoses. What doesn’t change is a child’s need for devoted parenting and a parent’s need for spiritual guidance and strength.

Mother and son aim to help other children and parents, to motivate them to keep trying. They encourage families to communicate in order to understand each other and face the world united, instead of pretending everything is okay when it isn’t. Whilemost readers will find it helpful, thisisn’t a self-help book. It is storytelling that offers hope through faith and hard work.

Over the years, Sally developed what she calls her L.A.U.N.C.H. code, an acronym about which those whochoose to read the book will find out more. Her strategy wasn’t to “fix” Nathan. It was instead to prepare him for life on his own.

Nathan is a successful adult now. He lives in New York where he is in- volved in acting and other entertainment-related fields, including writing.

What You Need To Know is the SCOTUS victory is overshadowed by how we got here in the first place. Guest Host Andrea Kaye breaks down the High Court’s … END_OF_DOCUMENT_TOKEN_TO_BE_REPLACED

What You Need To Know is our U.S. Supreme Court is supposed to uphold the constitution. These justices are supposed to be the most brilliant minds in … END_OF_DOCUMENT_TOKEN_TO_BE_REPLACED

What You Need to Know is Pelosi, pills, and pain. Pelosi has failed us again: she is the only dictator in American political life. She dominates the … END_OF_DOCUMENT_TOKEN_TO_BE_REPLACED

What You Need to Know is we are in a unique moment and Donald Trump is stepping up to it. Even some of the rabid leftists have to admit that President … END_OF_DOCUMENT_TOKEN_TO_BE_REPLACED

What You Need to Know is the fraudulent idea that impeachment requires delivery to the Senate was planted by Pelosi’s camp to trick Americans.  … END_OF_DOCUMENT_TOKEN_TO_BE_REPLACED

Phyllis Schlafly Eagles · December 3 | Christmas By The Numbers After a nearly yearlong ceasefire, America has once again been plunged into the War … END_OF_DOCUMENT_TOKEN_TO_BE_REPLACED

If the education establishment wants to know why public schools don't get much respect from our citizenry, they need look no further … END_OF_DOCUMENT_TOKEN_TO_BE_REPLACED

Robert Strange McNamara belongs on the daytime soap operas. Better yet, his histrionics belong on Donahue or Geraldo or Sally Jesse Raphael. We are … END_OF_DOCUMENT_TOKEN_TO_BE_REPLACED

What You Need to Know is being pro-life means we have to drain the swamp. When you take a look at the abortion industry, all you have to do is follow … END_OF_DOCUMENT_TOKEN_TO_BE_REPLACED