ATF Nominee, Gun Control, and Executive Law-Making Are All Bad News for America

Washington, D.C.: President Joe Biden took to the Rose Garden this week to announce a litany of gun control measures, all of which are riddled with lies, logical fallacies, and ultimately Constitutional improprieties.

“Article 1, Section 1 of the Constitution is crystal clear: all legislative powers are granted to Congress,” said Ed Martin, president of Phyllis Schlafly Eagles. “The Biden Administration put on an anti-gun event filled with leftwing buzzwords, but they didn’t include a single shred of evidence.

“Chief among the new proposals is Biden’s pledge to crack down on so-called ‘ghost guns.’ Homemade firearms have been legal in America since the colonial era, and they are so rarely used in crimes that the FBI and ATF have to lie about them to justify this action. Another part of Biden’s announcement included the nomination of Steve Dettelbach to head the Bureau of Alcohol, Tobacco, Firearms, and Explosives. Dettelbach is only slightly less embarrassing than Biden’s last pick, David Chipman, who failed miserably to garner even Democrat support.

“Most dangerous of all, though, is the ATF’s complete redefining of what constitutes a firearm as set forth by Congress in the National Firearms Act and the Gun Control Act of 1968. First of all, these new definitions are overly broad, and will give the ATF sweeping power to make changes that will make law-abiding gun owners felons overnight. But most importantly: who made the ATF a legislative body? This is absolutely unconstitutional, plain and simple.

“Congress needs to reclaim their constitutional authority from the White House. It’s time to check the Executive Branch and shut down out-of-control enforcement agents who are crafting a political agenda into law from their unelected, unaccountable bureaucracies. Congress should shut down the ATF and return legislative decisions to the representatives of We the People.” 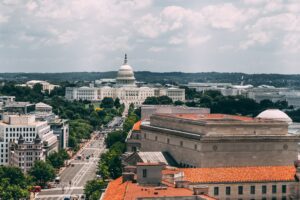 “We have to clean out the rot of our failed foreign policy establishment,” Donald Trump declared at his rally in South Carolina on Saturday. Trump’s … END_OF_DOCUMENT_TOKEN_TO_BE_REPLACED

For Immediate Release: May 16, 2022Contact: Ryan Hite, Communications Director The Power of Grassroots Is Surging and Winning All Across the … END_OF_DOCUMENT_TOKEN_TO_BE_REPLACED

Phyllis Schlafly Eagles · May 16 | The Trickle-Down Effect of Bad Policies Good news arrived in the district court of the District of Columbia, … END_OF_DOCUMENT_TOKEN_TO_BE_REPLACED

What You Need to Know how to drain the swamp in 2022! Kathy Barnette is running for Senate in Pennsylvania, and her story is absolutely incredible. … END_OF_DOCUMENT_TOKEN_TO_BE_REPLACED